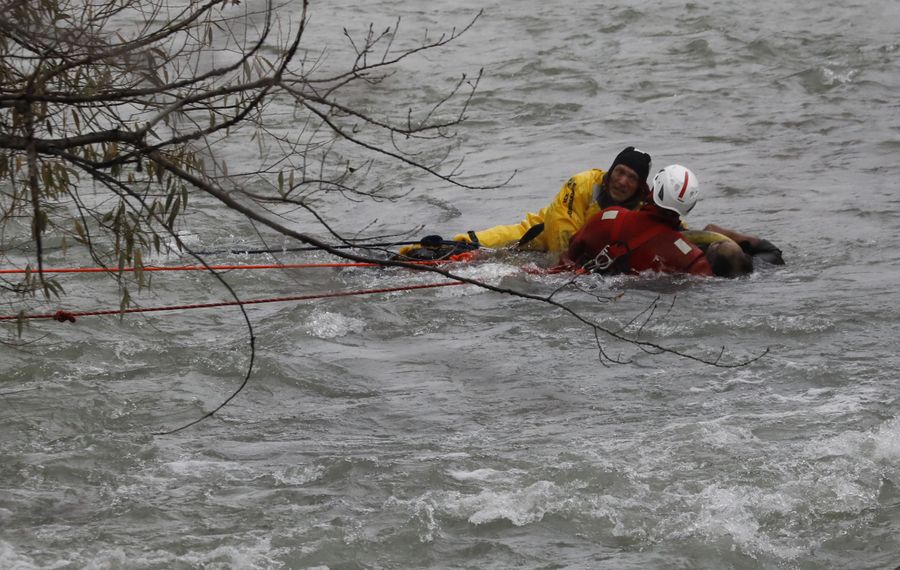 The Niagara Falls firefighters who saw a man clinging to a log in the middle of the upper Niagara River Thursday afternoon thought they had him secured with a flotation device connected by a line to rescuers along the shore.

But the man, who authorities said appeared to struggle with the firefighters, broke free. The swift-moving rapids above the falls carried him toward the brink. A crowd of onlookers standing on the shore gasped.

"We thought he was gone," said BillieJo Clause, a Falls resident, who was among the onlookers. "He was floating away."

That’s when State Park Police Maj. Clyde Doty looked up and saw the man floating toward him, reached out and grabbed him.

The dramatic rescue played out about 75 yards from the brink of Niagara Falls in front of tourists, first responders and other onlookers in Niagara Falls State Park.

With a grip on the man in the water, Doty squatted down in the rapids and put the man on his legs, he told reporters afterward. With one arm, he held the man’s head up. Doty had one foot in a crevice in the riverbed and the other behind a rock to stabilize himself against the current.

As he held the man, Doty himself could no longer move. So Niagara Falls firefighter Aaron Malstrom moved into the water and helped maneuver the other two to shore shortly before 2 p.m.

The man was conscious but not alert when he arrived on shore after being in the water for more than two hours, possibly longer. He was taken by ambulance to Niagara Falls Memorial Medical Center. His condition was not immediately known.

Authorities have not released the man’s name but said he was believed to be from Niagara Falls. They said they are trying to determine how the man came to be in the middle of the river.

“You never know when something like this is going to happen, and, of course, you have to be ready for it when it does,” Niagara Falls Fire Chief Joseph Pedulla said.

Police were called to the scene off of Goat Island in the state park about 11:45 a.m. for the report of a person in the water holding onto a branch, State Park Police Capt. Christopher Rola said. Park police called firefighters and other agencies for help.

Fire officials called the New York Power Authority, which uses the river to generate electricity at the Niagara Power Project, and asked officials there to divert more water to their plant in order to lower river levels. Such an adjustment would make rescue attempts less difficult, Pedulla said.

Once Niagara Falls Fire Capt. Gordy Stewart and Capt. Gerald Frazier reached the man in the 51-degree water, they put what’s known as a “flotation collar” around his torso, Pedulla said.

While the man appeared to struggle with his rescuers, police said it was not clear if, by that point, the man had become disoriented from being in the water for so long.

Doty said he positioned himself in the river in a spot where the man might move in case “there was a mishap of any sort.”

As he prepared to get into the water, the crowd of onlookers gave a gasp. That’s when Doty and Rola picked up the pace of their preparations.

By the time the crowd gasped for a second time – “There was a difference in that noise,” Doty remarked – he was in a spot to save the day.

Those watching the rescue screamed "get him" after the man in the water broke away from firefighters, said Clause, the city resident who said she came to the scene after hearing the incident on a police scanner.

"It was breathtaking," she said of the rescue.

Still, the man in the water, exposed to cold temperatures, was already in tough shape.

“He just had that stare,” Doty said. “Hypothermia had clearly set in. He couldn’t move.”

The man had been wearing a light jacket, jeans and thermal underwear. By that point, the rapids pushed his jeans halfway off.

“I had secured him, but I couldn’t move after that,” Doty said. “All I could do to keep his head above water and wait for help.”

Doty kept telling the man he was holding that he was strong, for having survived all that time in the water.

That’s when Malstrom moved out into the river and helped pull them back to shore. Onlookers cheered.

Doty and Pedulla pointed to the training given to police and firefighters that helped get them ready for a situation like this.

All they did on Thursday, they said, was react.

Pedulla said it was the man’s sheer will that kept him alive after being in the water that long. He credited the work of all the first responders who played a part in the rescue.

“With our job, it doesn’t matter how they got there,” Pedulla said, “it’s how we have to get them out.”