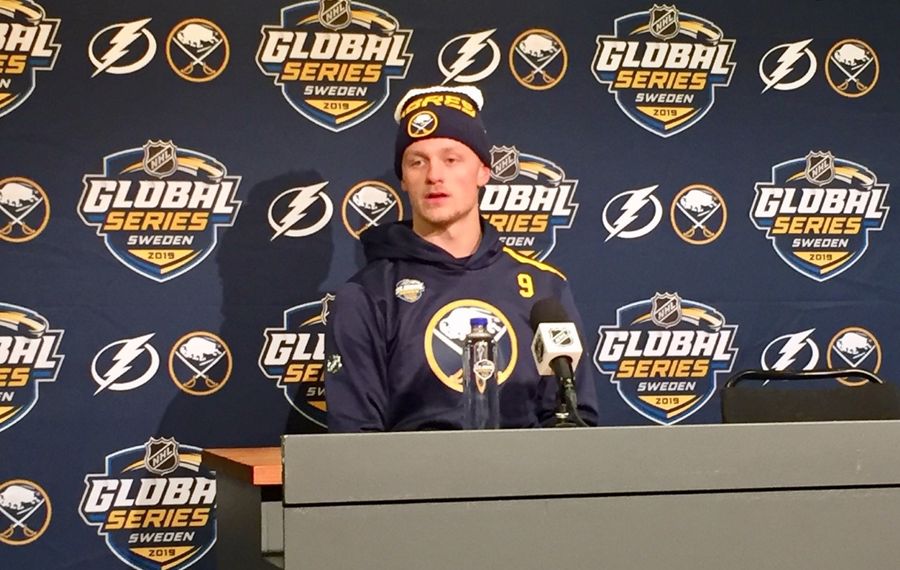 STOCKHOLM – There was a lot of chatter about the trip to Sweden days before the Buffalo Sabres' plane took off on Sunday night. There's been a lot of hype and a lot of free time since it landed Monday morning.

It's finally time to play hockey. The Sabres and Tampa Bay Lightning face off for the first of two games Friday night in Ericsson Globe (2 p.m. in Buffalo) and both teams should be plenty refreshed.

"The batteries are full and we're expecting a real high battle level from both teams," Sabres coach Ralph Krueger said after Thursday's open practice in the Globe. "I know Tampa is certainly feeling the same thing as we are. That was our primary focus here: Let's get refreshed in our minds, refreshed in our bodies and let's use this space to really show the best Sabres hockey possible this weekend."

The Sabres practiced for an hour before a crowd of about 3,000 and it was a normal day-before-the-game hard workout.

"It's exciting now that we've gotten adjusted, had those few days of good team bonding and a couple good practices," said Sabres defenseman Jake McCabe. "Now all the publicity and the public stuff is over with and we focus on these two games, two big games. It's a really good team over there and we know the firepower they have. A divisional opponent and that makes it four crucial points on the line."

While the Sabres are just 1-3-1 in their last five games after an 8-1-1 start, it's probably the Lightning who have more urgency here this weekend. In the wake of a 132-point regular season that ended with their stunning first-round sweep at the hands of Columbus, Tampa Bay has gone just 6-5-2 thus far.

The Sabres have done a pretty good job against Tampa in recent meetings, going 3-3-1 over the last seven. Buffalo was 1-2-1 against the Lightning last season, but had the lead in the third period of all four games.

"It's huge for us," Buffalo captain Jack Eichel said. "Obviously we've had a couple tough games recently, played well against the Islanders but the Washington game (a 6-1 loss Nov. 1) wasn't up to our standard. This is a divisional game, it's always a pretty tight game with them.

"There's a lot going on around the game. It's obviously quite the production. The league does a tremendous job showcasing this series but at the end of the day, there's four points up for grabs and it's a divisional opponent. You kind of have to get back into mid-season form, that mid-season mindset of it's two big games and get ready to go."

The Sabres made only one minor change at practice Thursday as Jimmy Vesey took Evan Rodrigues' spot on the fourth line with Casey Mittelstadt and Conor Sheary. As Thursday's lineup stands, the scratches on Friday would be Rodrigues and the defense pair of John Gilmour and Lawrence Pilut.

Tampa defenseman Victor Hedman, the former Norris Trophy winner who is the Lightning's only Swede, was a full participant in practice Thursday and worked on the team's No. 1 power play. He's missed the last two games with an upper-body injury but his presence on the power play indicates he's ready to go.

A reminder on broadcast information for the series:

Friday: The game will be on NBC Sports Network at 2 p.m., with John Forslund and Pierre Maguire on the call remotely from the network's studio in Stamford, Conn. Rick Jeanneret and Rob Ray will have the radio call on WGR and will be doing the game from (716) Food and Sport.

Saturday: The game will be on MSG at 1 p.m., with Jeanneret and Ray on the call from KeyBank Center and simulcasting on WGR Radio.

For the record, the games are being played on an NHL ice surface at 200 feet by 85 and not the larger international surface. The arena can convert to either size, shifting to the smaller rink simply by leaving extra space behind the players' benches and penalty boxes.

As Sabres' Johan Larsson returns to Sweden, he remembers a historic day in the park