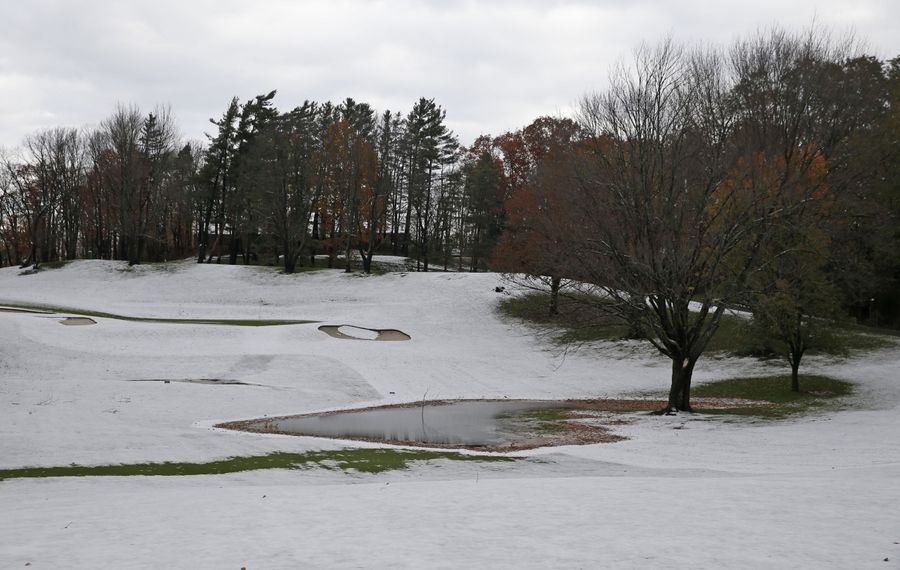 Buffalo has received just a trace of snow as of Wednesday, which means some snow was eyeballed but there was nothing to measure. That is a whopping .6 inch below average as of Nov. 5. This should tell you that the “October surprise” was a notable exception to the average lack of snow at lower elevations into early November in Western New York. In fact, the .6 inch is skewed upward by the 22-plus inches that fell in the 2006 storm.

We have a shot of some visible snow Thursday in the metro area, with the passage of a cold front and some low pressure waves moving along the front. Here is a high-resolution model depicting conditions toward early/predawn Thursday. As cold air slides in from the northwest, preliminary rain will be turning over to snow.

The snow picks up during mid- to late morning as colder air deepens behind the front. The snow should stick even at lower elevations but mainly on the grass and elevated surfaces. Most roads in the Niagara Frontier will likely be wet, not white into early afternoon.

Temperatures will be falling through the 30s but may not slip below the freezing mark until late in the afternoon. That makes sticking a sticky proposition for the midday hours. Still, it’s possible some elevated roadways might have some slick spots by late in the day even at lower elevations. This particular model is not impressed by accumulation potential, and neither am I.

Even these paltry modeled amounts don’t account for some melting of fallen snow during the day. In the evening and into Friday morning, a colder northwest flow will take the temps below freezing even near the lakes and set up Western York York for some lake snow showers. Some slick spots will develop on the roads with temps dropping into the 20s. Typically a northwest flow doesn’t bring much measurable snow to the Niagara Frontier, although an occasional connection with Lake Huron can bring some spotty heavier bursts. By early Friday, the cold north-to-northwest flow may have us primed for multiple “skinny” strands of lake snow, with some help from Lake Huron. Even with that assistance, modeled snow amounts will be much spottier and less impressive at lower elevations, and the higher amounts will be confined to hilltops inland from Lake Erie, such as on the Chautauqua Ridge. 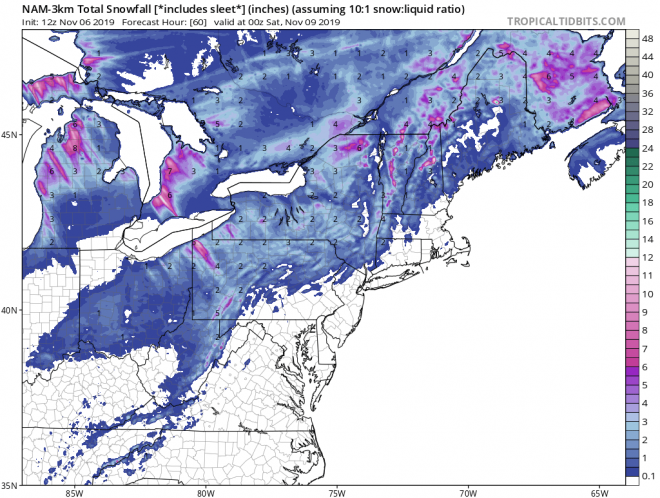 Friday will be the coldest day so far this season, with high temps from the upper 20s on the hills to just the low 30s in the metro area. Some lake snow showers will still be in the air as winds stay west-northwest. Friday night into early Saturday, winds will back to southwest, sending the lake snow northward toward the metro area, weakening on Saturday as milder air moves in aloft, with the snow dying out north of the metro area by afternoon. The morning lake snow may put a little coating on metro area roads with colder surfaces. While temps will edge back up a few degrees, it will still be cold with a nasty wind chill on a brisk breeze.

Sunday could bring some light rain and wet snow showers both here and at Cleveland, if you’re heading there for the Bills-Browns game. Temps will be in the low 40s here and the mid-40s in Cleveland. Again, a brisk southwest breeze will be around making for an uncomfortable wind chill. After that, the next shot of wintry weather will approach Sunday night with some rain showers ahead of a cold front that will  turn them to snow showers by Monday morning. Behind this front, there is a possibility of a fresh coating of a couple of inches at lower elevations with greater amounts on the higher terrain. Some additional snow may fall on Tuesday.

It appears the first part of next week may bring us even colder readings, possibly topping out in the upper 20s to 30 by Tuesday and Wednesday, and nighttime lows in the upper teens-low 20s Tuesday and Wednesday nights. Currently, low-level winds in extended range models don’t appear favorably aligned for much in the way of lake-effect snow despite the presence of a polar air mass. It may be a matter of more widespread light to moderate snow behind this arctic surge. There are hints of a low-pressure system passing by far enough to our south during early next week to spare Western New York any significant widespread snow but, of course, it will bear watching. With or without that system, it’s a good time to check out your snowblower’s readiness.

The overall trend for at least the first half of November continues to favor colder-than-average temperatures for this time of year. There is no doubt it will be cold enough to snow during most of the six-to-10-day period, with the Climate Prediction Center giving our region a 90% probability of colder than average temps.

With that comes a modest probability favoring above average precipitation.

Little changes in the eight-14-day outlook, except uncertainty naturally increases further out in time. Finally, and this is anything but conclusive, long-range winter specialist Dr. Judah Cohen tweeted the extended-range American GFS ensemble mean for snowfall toward mid-month.

GFS ensembles are now all in for #snowfall across the Northeast for next week. Seems like the trend for early snowfall that started in the Northwestern US back in September continued in the Central US in October may make it all the way to the East Coast by next week. pic.twitter.com/LJ3fO5hVYQ

While those colors may look ominous, keep in mind (a) the legend is in millimeters, meaning the amounts in inches are low and (b) models predicting tabulated snowfall amounts out to 10 days are notoriously fuzzy and less than accurate. It’s the general distribution and location that matter, much more than amounts.