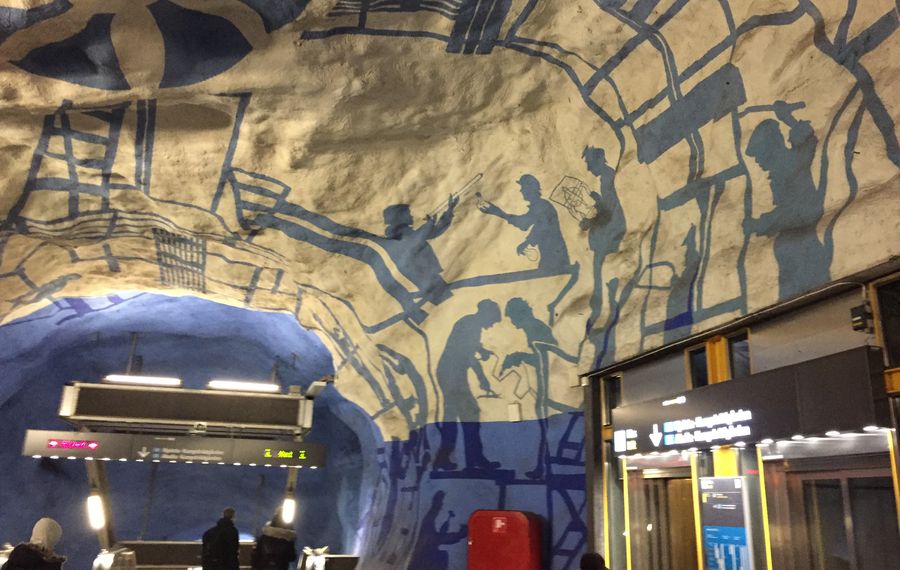 Editor’s note: Mike Harrington is in Stockholm to follow the Buffalo Sabres’ experiences before playing Tampa Bay on Friday and Saturday. He also will share some of his experiences and thoughts about the trip.

There's far more to the subway here than just hopping a train. Many of the stations in the city's vast network of "strands" (lines) are art galleries, with elaborate paintings or sculpture adorning the walls.

I have a weekly pass so I was able to do a hop-on/hop-off tour at several stops Wednesday morning on the way to Sabres practice. It should be noted that the "Globen" station by the Ericsson Globe Arena does not have any elaborate designs, and has a pedestrian feel like you would see in places like Boston or New York.

That's not the feeling in many other places on the Stockholm system, known here as the "tunnelbanakarta".

The system has nearly 100 stations and began in 1950. There are seven strands and three colors (green, blue and red). Many stations were planned with art and many more have had it added or revised in the years since.

Let's start at the station closest to my hotel, Thorildsplan on the Green Line. It's an outdoor station at the end of about a five-minute walk through a neighborhood. But there are a couple spots around a traffic circle where you feel like George Costanza in that famous Seinfeld episode where you're playing "Frogger" against the cars, buses and cyclists.

A Stockholm scene: Crossing the street at a traffic circle is interesting. Push the button, watch and wait. Be wary of cyclists — even in 30-degree weather that makes jackets a good idea for dogs. Wait for the jackhammer sound effect to go. #Sabres pic.twitter.com/huCNYN90P0

A Stockholm subway art guide I found this week said the artist was inspired by the surroundings and came up with a video game theme on tile. And the designs absolutely look like a cross between Ms. Pac Man and Mario Kart. If a rider is at the end of their trip, I wonder if they slap their hands together and say "Game Over." 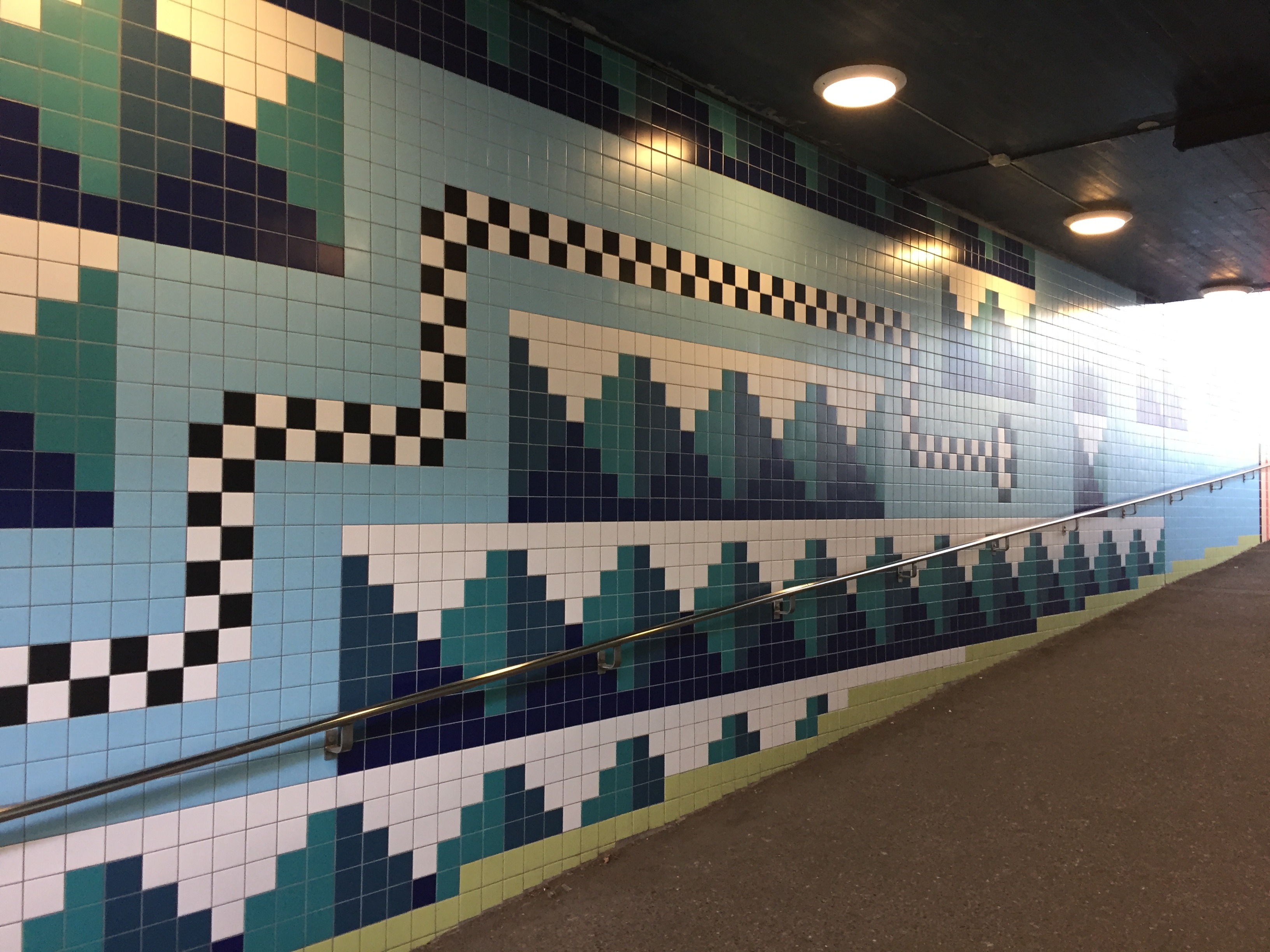 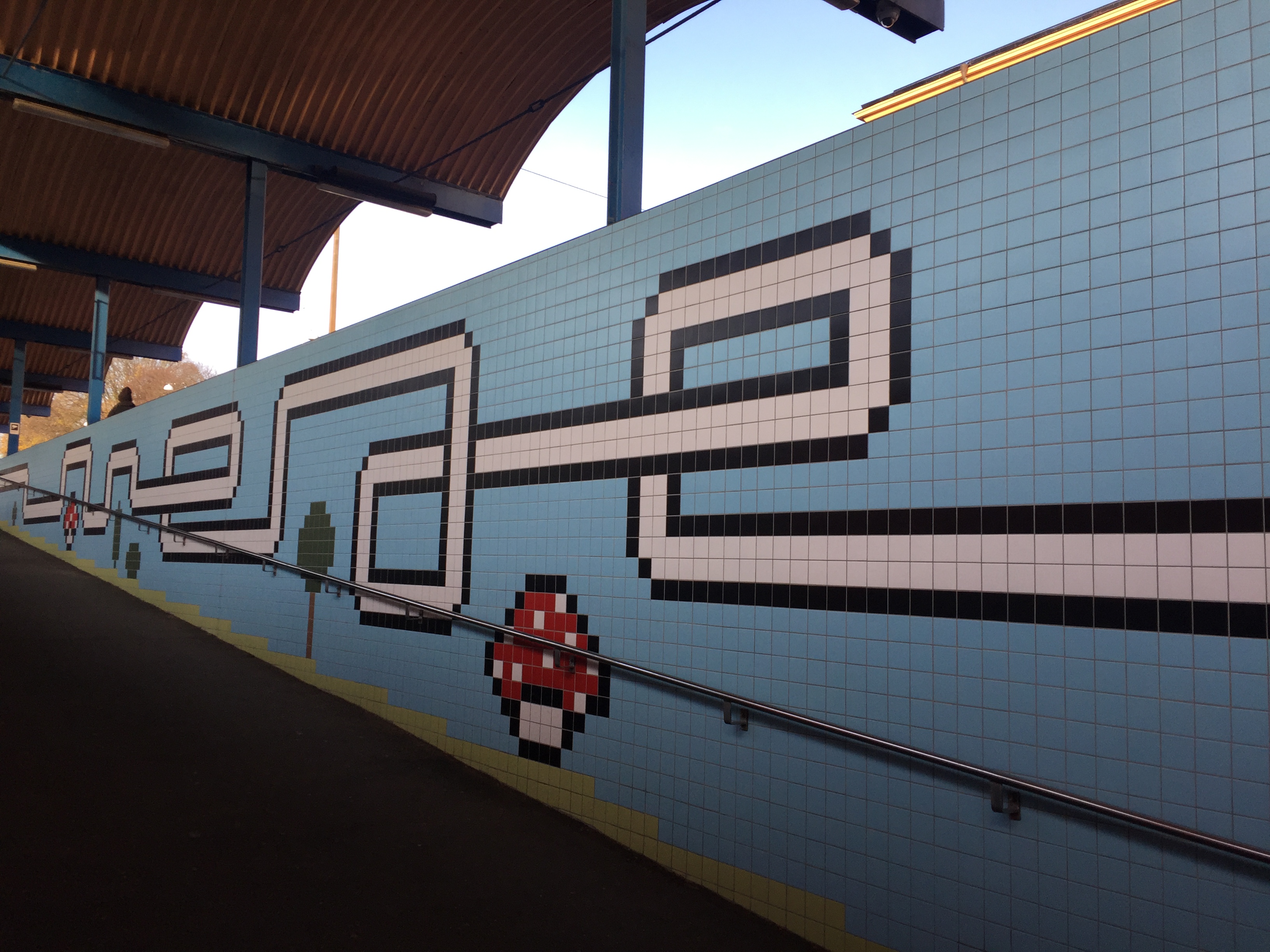 It was on to T-Centralan, the elaborate Central Station of the line. It's the busiest, with people streaming on and off Blue Line trains in a scene reminiscent of Times Square or Grand Central in New York, Yonge/Bloor in Toronto or Park Street in Boston.

But through the bustle, there's an eerie calm. Maybe it's because of the tranquil blue sky scenes painted all around, including one that completely envelops an escalator. It's spectacular. I question if the photos even remotely do it justice. 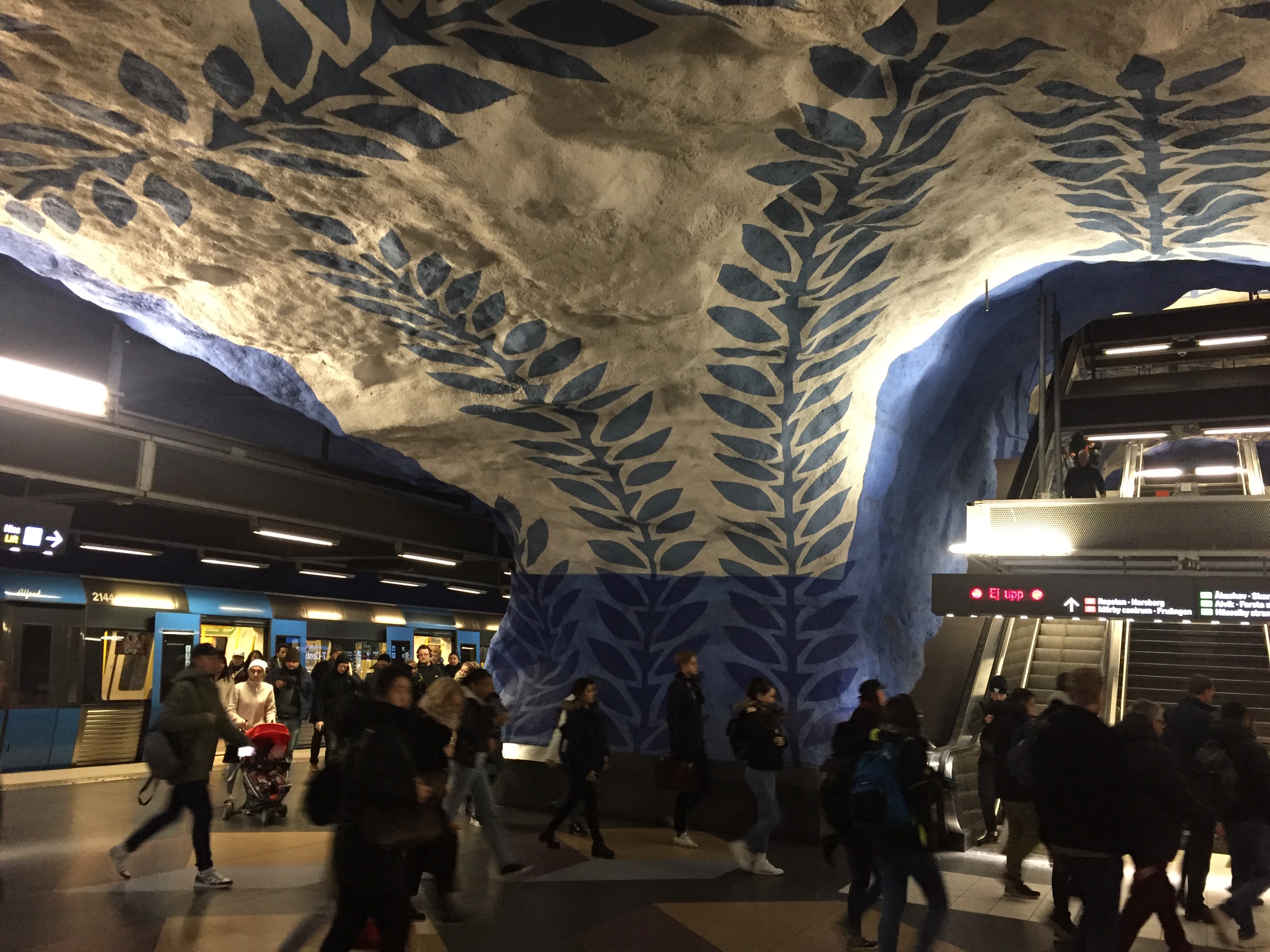 The tranquil blue on the exposed bedrock at T Centralan. 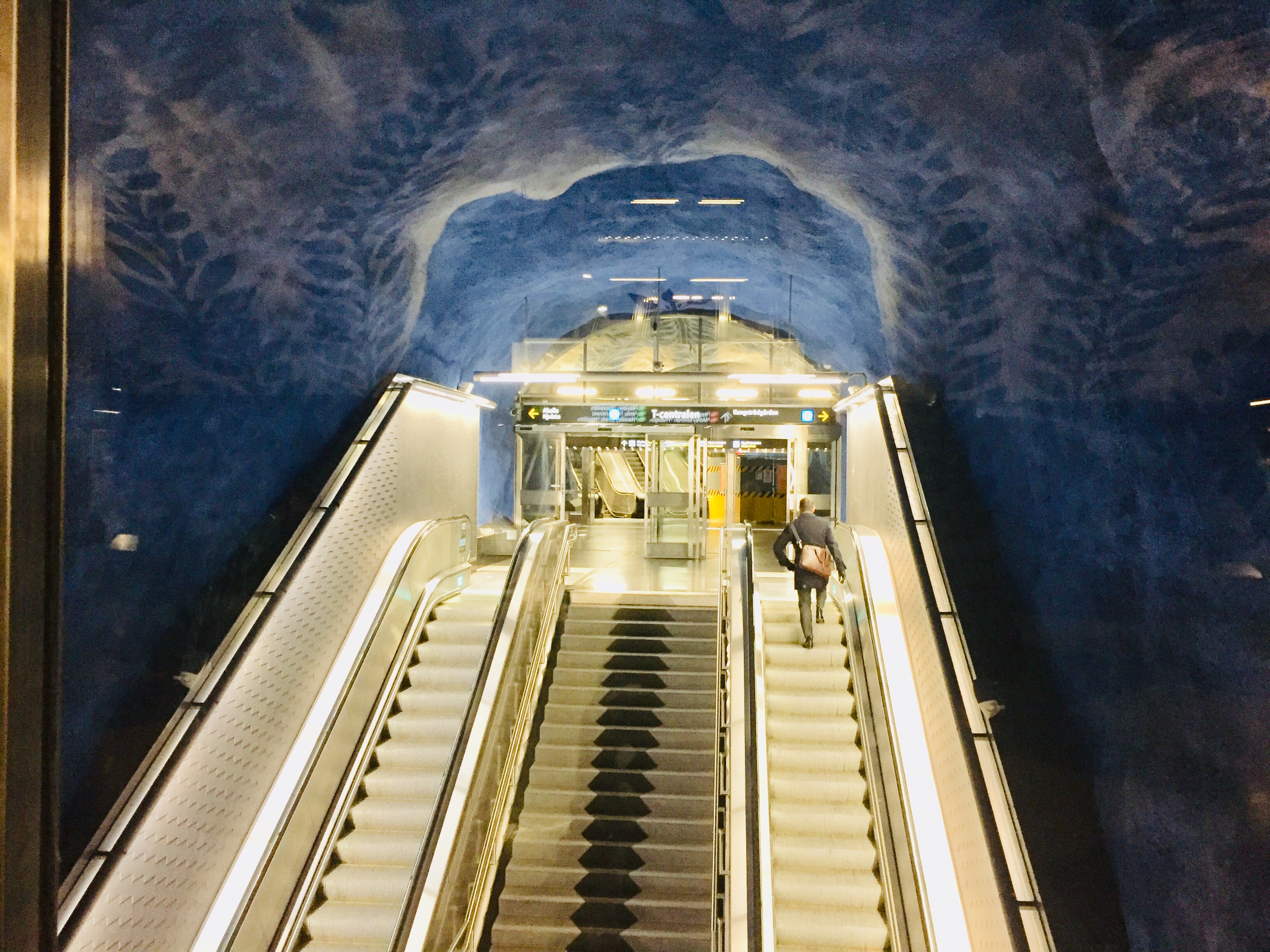 It feels like you're heading to the sky on the escalator at T-Centralan.

The next stop was a change to the Red Line and a jaunt to Stadion, adjacent to the main gathering place for the Stockholm Pride Festival. And the design is appropriate -- lavish rainbows against bright blue caved walls.

(After going, I've since learned the name is because the station is near the 1912 Stockholm Olympic Stadium, which still functions as a track and soccer venue and was going to be used in the city's failed bid for the 2026 Winter Olympics. I will have to return in the next three days to see it.) 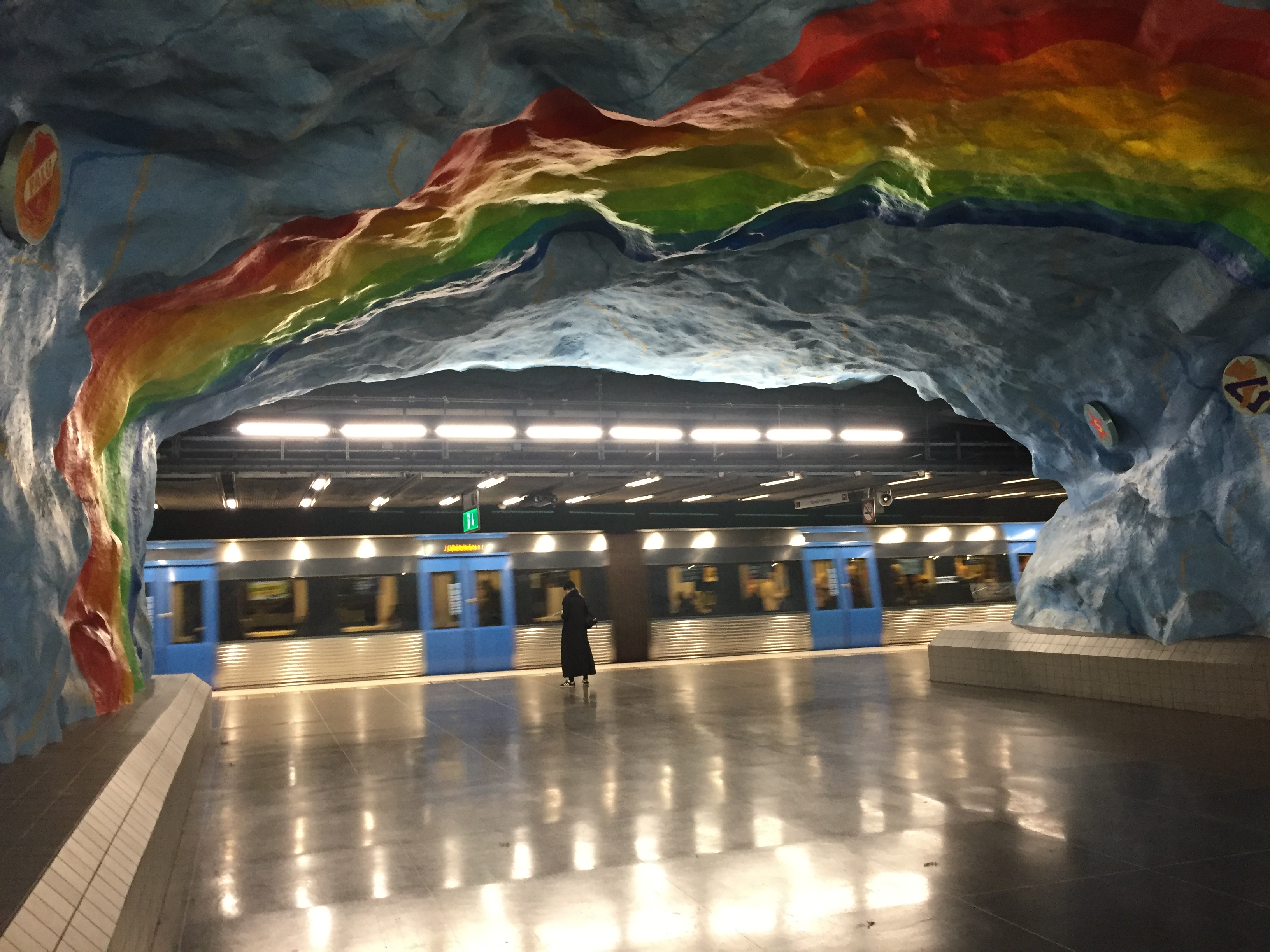 The Stockholm Pride Festival colors are represented at Stadion station, near the site of the 1912 Summer Olympics.

The final stop was Kungsträdgården on the Blue Line, located smack in the middle of downtown. And unlike the other stops where I seemed to be the only tourist taking pictures, this one was full of iPhone toters and professional photographers.

Kungsträdgården ("King's Garden") has been a public park since 1875 in the middle of downtown. Between 1643 and 1825 it was the site of Makalös Palace and a large French garden. Some statues are replicas of the art in the palace, which was lost in a fire nearly 200 years ago.

The park has been the site of some of Sweden's great celebrations for achievement in both the public sector and sports. The 2012 World Junior Championship team, captained by current Sabres center Johan Larsson, was feted in the park by more than 20,000 fans.

The color scheme of the station is much more dark and foreboding than the previous stations but no less interesting. There are placards for public art displays on one wall and giant rock formations and gargoyle-like structures on another. 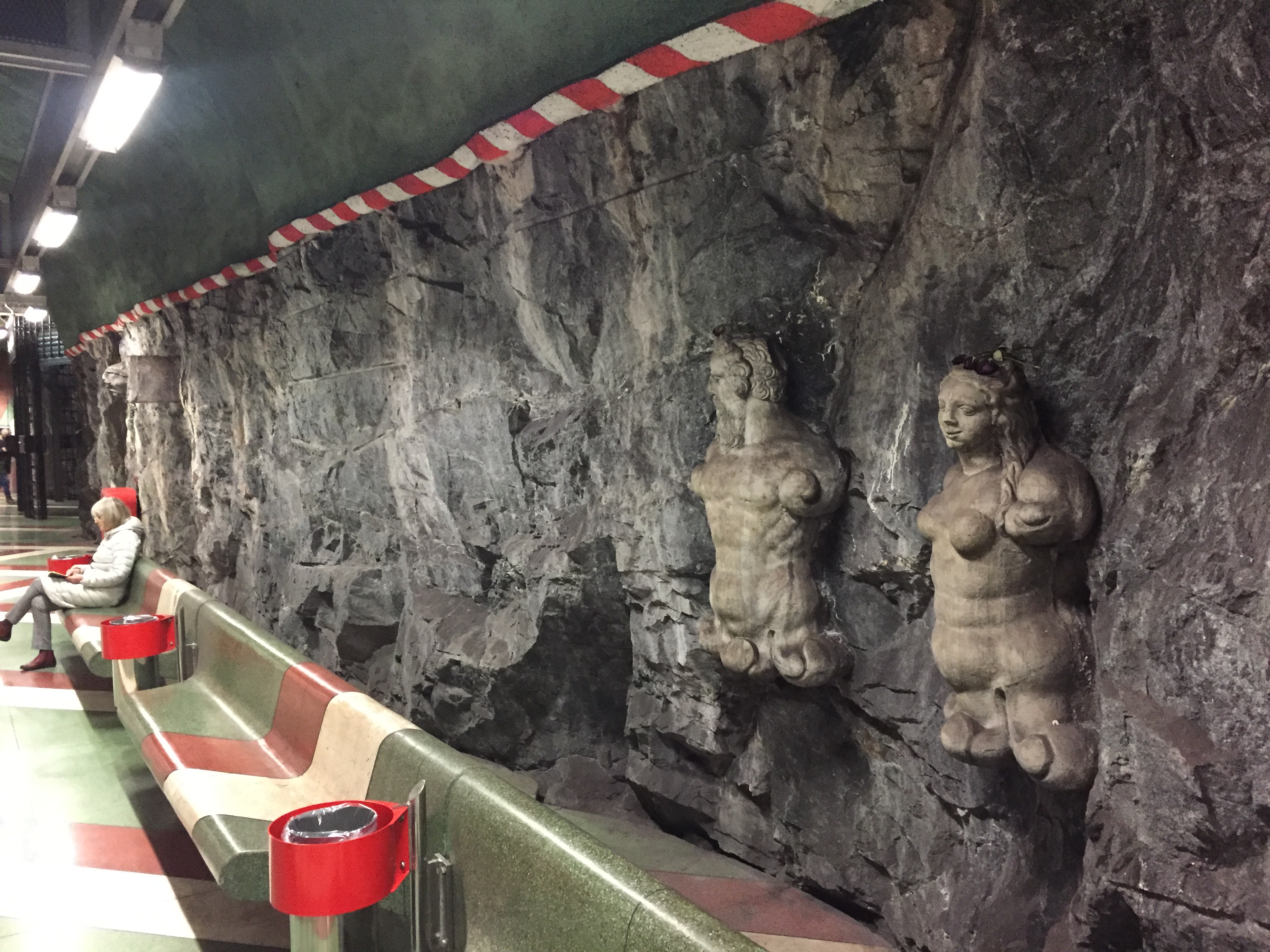 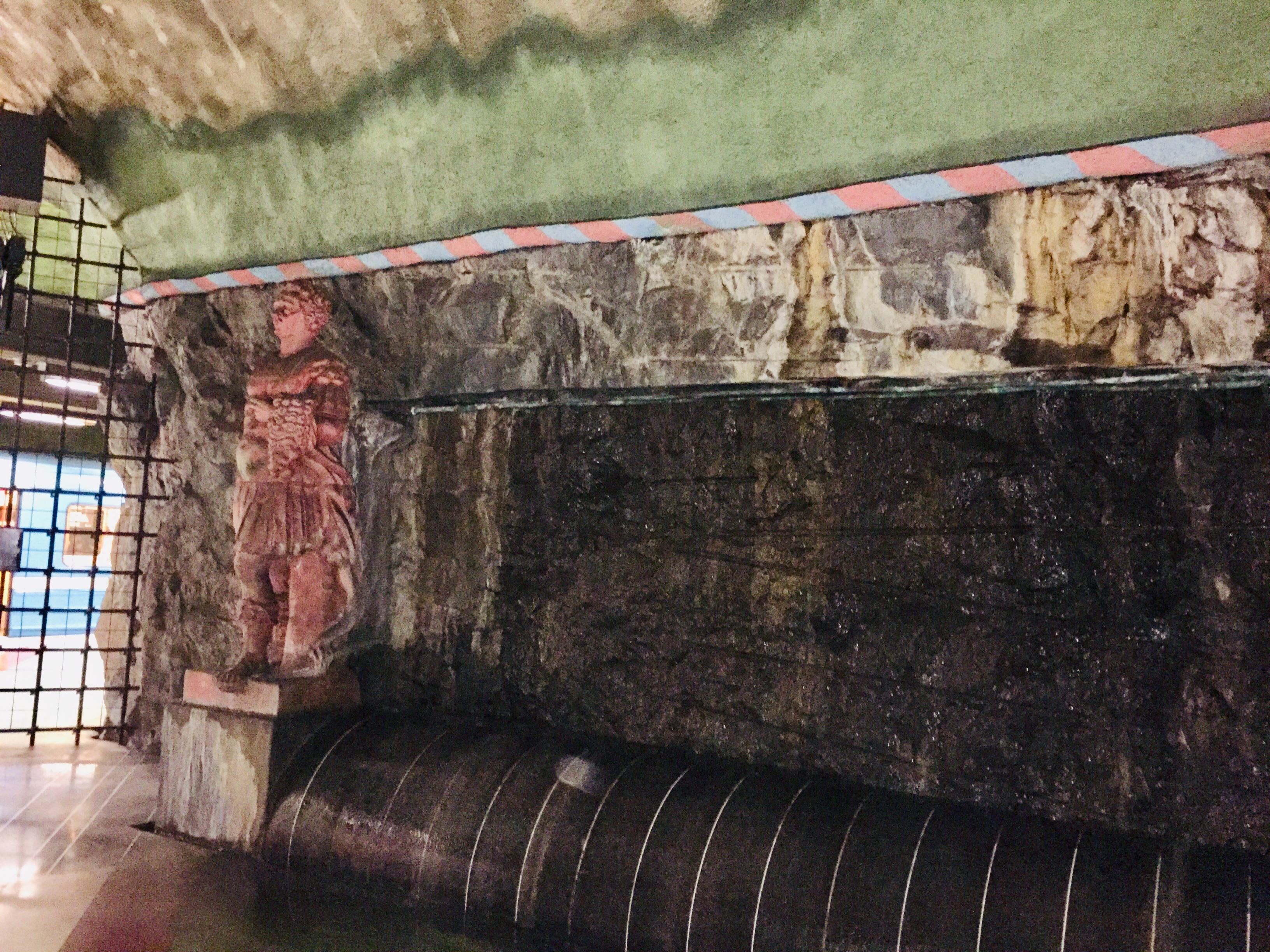 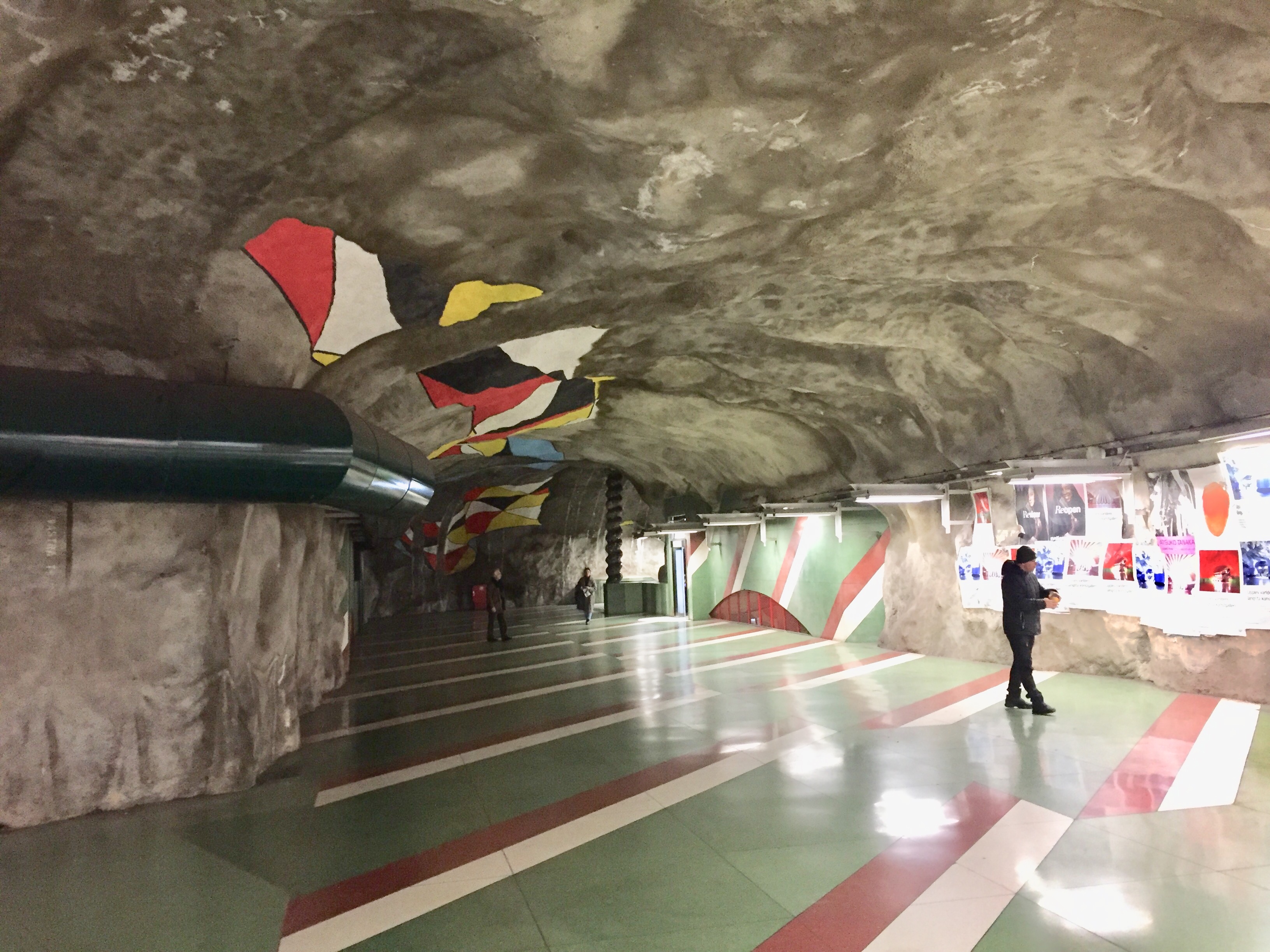 The gargoyles and exposed rock of Kungsträdgården.