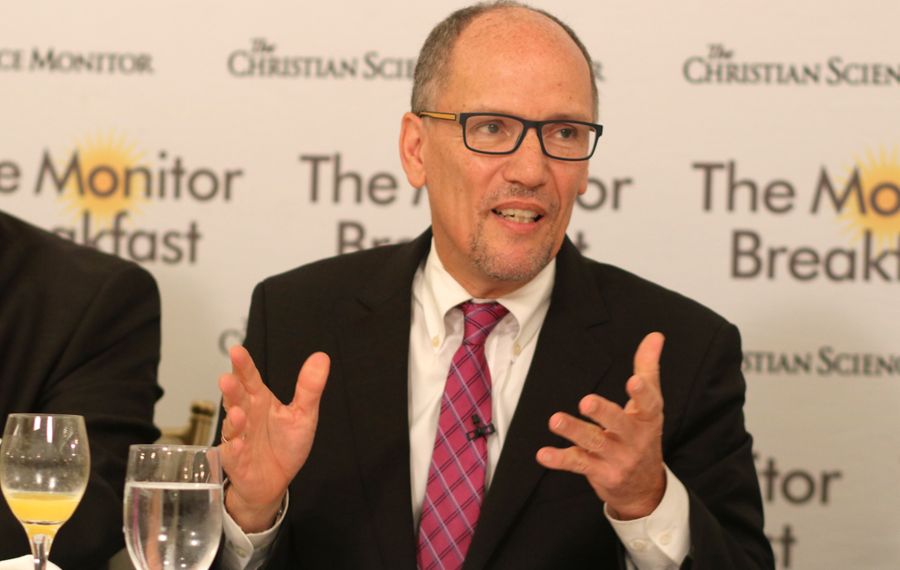 WASHINGTON – Democrats on Tuesday came away as surprise winners in parts of America that are usually painted deep red.

And the chairman of the Democratic National Committee – Buffalo native Thomas E. Perez – thinks it's because the party is becoming just what he promised it would be: one that can compete in every corner of the country.

"In February 2017, I ran for chair of the DNC, and I ran under the promise that we were going to work together with our partners in the Democratic ecosystem to build a 50-state party so that we're competing everywhere every year in every ZIP code," Perez said Wednesday at a reporters breakfast sponsored by the Christian Science Monitor. "And we are doing exactly that."

Proof of that came on Election Day 2019, when Democrat Andy Beshear edged the incumbent Republican governor, Matt Bevin, in Kentucky – a state that Donald Trump won by 30 points in 2016.

Elsewhere, Democrats took control of the Virginia State Legislature for the first time in nearly three decades, piling up wins in what had been traditionally Republican suburban strongholds. The same thing happened in local races in Delaware County, Pennsylvania, a swath of suburbia where the GOP has a 30,000 vote enrollment advantage.

"What I learned from last night was that we indeed can win everywhere," Perez said.

To hear Perez tell it, the party managed that feat by combining old-fashioned politicking with new technology to capitalize on the unpopularity of the Republican president.

In Kentucky, for example, the Democratic Governors Association used the mother's milk of politics – money – to put Beshear over the finish line. The Democratic group spent $5 million in that race, money that certainly helped in a race so tight that the Republican incumbent is refusing to concede and demanding a recount.

Then there are the 110 million cellphone numbers the national party acquired last year to share with its state affiliates. On top of that, the party created the Democratic Data Exchange, which enables Democratic campaigns and the party apparatus to share information instantly.

All that helped drive Democratic voters – especially young ones – to the polls on Tuesday, Perez said.

"You look at the turnout yesterday among young voters in Virginia," he said. "With the vitriol of this president, there's a Trump fatigue that has set in."

That being the case, Perez said he remains optimistic about electing a Democratic president next year.

Asked if he had any concerns that his party could nominate a strong progressive candidate who couldn't compete in Midwestern swing states, Perez said: "I actually think the extreme party in America right now is the Republican Party, and that's why we've been winning elections."

"He was inviting a foreign leader to interfere in a domestic election," Perez said. "That is un-American, at a minimum. And people can see through that."

Perez said that while Trump fights off impeachment, Democrats will continue to discuss the issues that they've talked about throughout their successful 2018 and 2019 election cycles, just like Beshear did in Kentucky.