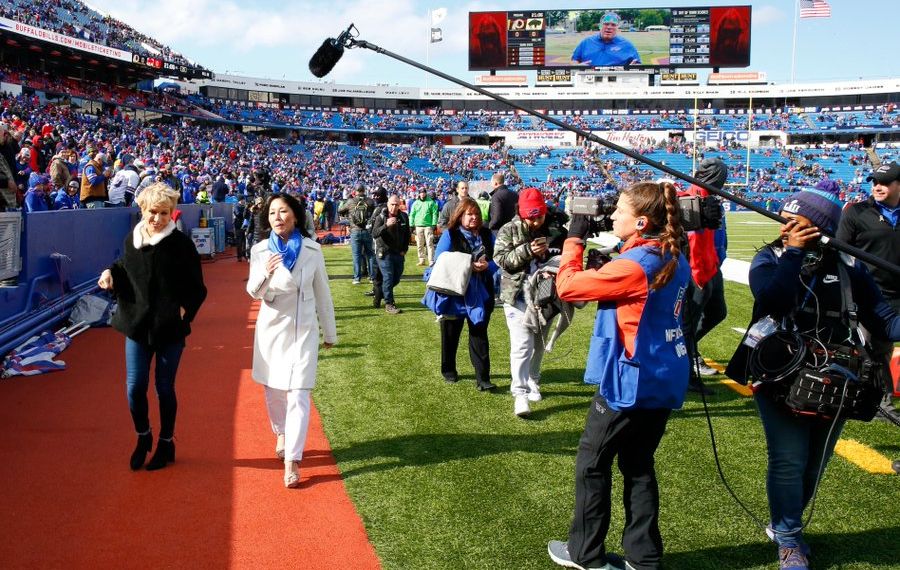 If Kim Pegula had a magic wand, what would she want five years from now?

It was the last question that "Shark Tank" star Barbara Corcoran asked the Bills and Sabres president and co-owner in the closing moments of Sunday's win against the Washington Redskins as part of a profile to air Wednesday night on "NFL: The Grind" at 9 p.m. on Epix.

“What I wish for on my birthday every year is a Super Bowl, a championship," Pegula said. "I know that sounds so corny. It would mean so much to this community. For us to be owners when that happens — this whole city would go crazy. They’re so deserving. If there is any fan base that deserves it, it’s the Buffalo fans.”

Corcoran spent time with Pegula last weekend driving through Buffalo, at the Pegulas' home and before and during Sunday's game. Their conversation ranged from the personal for a national audience that might know the Pegulas as well as fans in Buffalo to the bigger picture of owning an NFL team.

Corcoran noted that Pegula has become the public face of the organization.

“I enjoy it now. I didn’t. My team will tell you it was something" that she had to work on, Pegula said. "Whether in business or in sports, and it's so ever-changing and you have to adapt. Mrs. Ford (Lions owner Martha Firestone Ford), who is in her 90s and comes to all the owners meetings, I’m like, I want to be her one day. I want to be in my 90s, still going to the games and still being excited about the games and the season. We’re so lucky that we get to do what we love to do.”

Corcoran asked Pegula why she would live in Buffalo, given the weather.

“I grew up here in Western New York. My husband grew up in Pennsylvania in the Scranton area," she said. "We connect with this lifestyle. His dad was a truck driver, picked coal in the mines in Scranton, Pa. I was adopted and in an orphanage in Korea.

"We are very blue collar and always connected with the people here. I’m very fortunate to find the love of my life. ... I’m going to start crying."

During the early part of the second half, Pegula watched the game on a large TV screen in the owners' suite rather than watching out the front side to the field.

“We haven’t scored. I’d like to see us have a little more distance than we do," she said.

As the Bills moved the ball, she said, "I’ll probably go watch now because we’re close enough to the goal line.”

Corcoran: Are you going to send him an email saying great job?

Pegula: No. Not yet. We still have eight more games to go.

Corcoran: You’re not going to give him a compliment for another eight games.

Pegula: I might say, good game, but not too flowery. You get to keep them hungry.