Poloncarz joined fellow Democrat Dennis T. Gorski as only the second county executive to gain a third term,  notching a solid — but not overwhelming — win with all votes counted. Combined with a maintained Democratic majority in the County Legislature, Poloncarz now appears to have received approval for continuing his claims of steady governance and economic development that he emphasized during an often nasty campaign.

The county executive appeared before the Democrats’ raucous victory celebration in a Statler City ballroom at around 11:25 p.m.

"I am here to declare victory for another term!" he proclaimed, adding he believes "the best is yet to come."

Then he returned to the Democratic roots he emphasized throughout the campaign.

"Our party, the party of the people, is strong, and certainly set the stage for 2020!" Poloncarz said.

Dixon, meanwhile, offered her concession in an emotional speech as midnight approached. Surrounded by her children, siblings, nephews and nieces, she noted that that her aides gave her only a 35 percent chance of winning when she entered the race nine months ago.

“I think we started holding up the mirror a little bit,” she said, adding that she wasn’t afraid to continue challenging Poloncarz – at least until the end of her term.

Dixon said she is not sure what the future holds for her, but that it will be "really great."

But the night belonged to the rival Democrats. The county Democratic organization headed by Chairman Jeremy J. Zellner was at the Statler affair in full force, and it seemed to also revel in its close association with the county executive.  Lt. Gov. Kathy Hochul joined the chorus of voices who were forecasting a Poloncarz victory as the votes rolled in, praising him as “the greatest county executive we have ever had.” 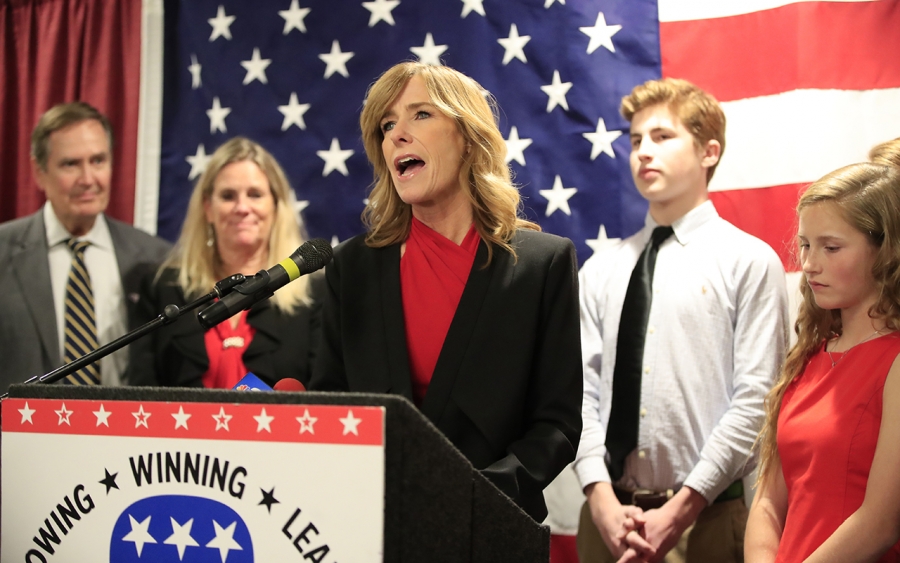 Poloncarz, 51, all along was favored to win, even though many observers questioned if the lack of local contests would dampen turnout in heavily Democratic Buffalo. But the attorney who also served as county comptroller overcame that challenge to dispatch Dixon by a healthy margin. Now Dixon, a county legislator from Hamburg, leaves county government after giving up the seat she held for a decade to mount her underdog challenge.

The first woman to ever run for Erie County executive on a major ticket, Dixon, 54, broke strongly from the gate in July with more than $250,000 campaign account – a sign that her effort would be at least decently financed. Poloncarz then launched early and negative ads against Dixon, linking her to the now-disgraced former County Executive Chris Collins, who resigned from Congress in September after he plead guilty to insider trading charges.

In contrast, Poloncarz never aired negative ads against Republican Raymond W. Walter, whom he easily defeated in 2015. Many political observers believed the negative ads that dominated the 2019 contest indicated a much closer race.

The dynamics of the race right up until Election Day showed that Poloncarz was taking his opponent seriously, especially as she burnished her image of a “single mom” in a folksy, close-to-the-people approach. She continually labeled her political affiliation as an “independent,” despite her membership in the Independence Party and its long history as a GOP ally.

A former radio and television reporter, Dixon also started with considerable name recognition and a reputation for consistently winning in a Democratic legislative district despite caucusing with Republicans in County Hall.

By her last campaign finance accounting in October, however, she reported only about $17,000 on hand in a sign that her campaign was flagging. Still, her Republican backers hoped that a strong turnout in Democratic suburbs such as Cheektowaga, Hamburg, Lancaster and West Seneca – which can vote Republican as they did for Donald Trump in 2016 – would carry the day.

During a key Oct. 17 debate between the two that was broadcast on radio and television, Dixon launched her sharpest jabs at the incumbent when the campaign got personal.

“Mark Poloncarz, you are a bully,” Dixon said as she lamented what she considered his negative campaign and failure to tolerate opposing views.

“I don’t know if it’s because I am a strong woman,” she continued, “or if you have a problem with people that challenge you. But you need to be challenged.”

In turn, Poloncarz portrayed himself as the steady caretaker of a county government bereft of fiscal problems or scandal.

“I will never allow Erie County to go back under my watch to the bad old days when we ran deficits,” he said during the same debate.

Real issues also dominated the campaign. Dixon emphasized what she called the poor condition of county roads, at one point starring in a television ad behind the wheel of her car. She also clashed with Poloncarz on aspects of economic development, saying his insistence on strict enforcement of “clawback” rules in exchange for assistance from the Erie County Industrial Development Agency was hurting business.

But the county executive pointed to thousands of jobs created under his watch as his signature accomplishment and argued that his approach was working.

“I want to make sure this renaissance continues,” he told a business forum in October. “I was getting pretty sick of hearing how great our region was in the 1950s and '60s.”