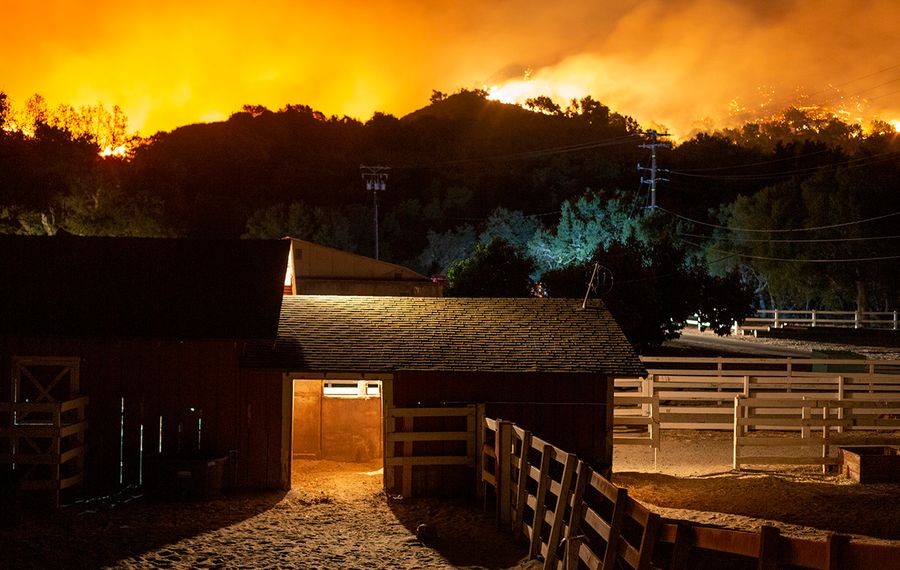 Virtually no one in the scientific community is claiming climate change is directly causing more wildfires in California or elsewhere out west. Even most political leaders such as former California Gov. Jerry Brown or current Gov. Gavin Newsom have gotten themselves adequately informed to realize the long history of wildfires during the dry season has produced ferocious fires before the warming climate accelerated. For example, here is a still taken from a San Francisco Fire Department report on a 1923 fire which caused great destruction in Berkeley and Oakland: 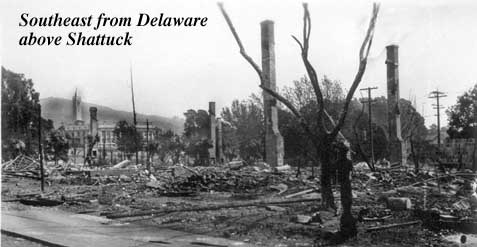 Yes, often terrible fires have been around in these semi-arid and arid regions throughout recorded history. But there is little doubt the ferocity of these wildfires has been worsened by climate change in recent decades, right up to the current time. The basic early autumn climate setup for Southern California hasn’t changed. The development of what are called Santa Ana winds is favored when a lasting ridge of dry high pressure sets up in the Great Basin east of the California mountains. In its clockwise circulation, the flow coming around the bottom of the ridge is seen here in this NOAA regional diagram.

When these east northeast winds are forced to come down through narrower mountain passes to head toward the coast, they are squeezed, forced to compress and heat up through compression, and accelerate, which dries them out further to produce incredibly low humidity. For example, here is a tweet I sent out last Wednesday concerning Glendale, a densely populated section of Los Angeles:

Terrifying fire threat continues in Southern California; 9 AM EDT dewpoint in Glendale, part of greater Los Angeles, is -11° which gives a relative humidity of 6%. Destructive winds are increasing, drastically adding to the threat.

There are passes that are most favored for these violent winds, depending on the placement and strength of the inland ridge. Knowledge of the topography and climatology at least gives the National Weather Service and other agencies a lead on what downwind locations are most likely to experience the worst tinderbox conditions.

What is the evidence climate change is making things considerably worse? To begin with, favorable “setups” are lasting longer than they used to. That is, there is more persistence in such features as the interior ridge that favors Santa Ana winds because arctic warming has helped to episodically slow the jet stream by lessening the thermal contrast between the polar and mid-latitudes. This more often creates high amplitude blocking patterns during which there is much less west to east progression of weather systems with deep low pressure troughs and mountainous ridges of high pressure, as seen in this image posted by Michael Ventrice of IBM’s the Weather Company.

The more frequent blocking episodes are one factor. Another factor is simpler. It’s getting hotter and drier during these episodes when Santa Ana ridges are in place. The dense network of observation instruments in places like California are showing temperature increases running around 2-3 degrees over hot, dry spells of half a century ago, and longer spates of desert dry humidity levels. That means once a fire is sparked, conditions for it spreading are more likely more often. During the Sonoma Kincaid fire last week, gusts were measured at 93 mph (unofficial gust measurements were even higher) with humidity in the low single digits. Momentum builds and persists longer during these blocking episodes.

It’s not all a matter of more frequent and longer lasting droughts, either. In a recent National Academy of Sciences/NAS study, it was found such places as southern and central California even following wet periods remain vulnerable to more severe fires because of the increased thermodynamic warming during fire season, always a part and parcel of California summers and autumns. Even following very wet winters with abundant mountain snow, what seems to be a drought-busting winter STILL can set California’s wildfire season up to be devastating. After a wet winter, vegetation goes on a blooming tear in the early spring, bringing great beauty and good planting conditions for the enormous agricultural inland valleys.

However, California summers and at least early/mid-autumn are always very dry, month after month even if a longer term drought is not in place. What brought abundant vegetation reblooming now leaves the dried landscape with much greater stores of fuel for the inevitable fire season. There is, then, the paradox of drought-busting rainy seasons adding fuel to the fires coming later in the year. When you add to that the longer episodes of exceptionally drier and hotter air masses parked east of the California mountains feeding the Santa Ana winds, the ingredients for disaster are worsening.

Some of this increased risk, according to the NAS study and others, is brought on by what may be poor fire suppression policies followed by federal and state authorities. The suppression of some fires also can be a prime ingredient in increasing the combustive fuel supply down the road. Such suppression may be helpful for a year or two in a given region, but can lead to worse conflagrations with the passage of time. The tremendously complex questions raised in the management of fire suppression is beyond the scope of this article. What does seem certain is wet winters used to help with the fire season in the fall earlier in the last century. That has changed in the last 50-plus years. There appears to be some tie-in between both the fire suppression management techniques in combination with hotter, drier conditions enhanced by climate change in an environment where summers and early autumns were already hot and dry.