On a scale of 1 to 10, the Halloween night storm that pounded homes at Hoover Beach in Hamburg was an 11, Jack Schultz said.

"I thought I was living in a castle, we had a foot of water around the house," Schultz, 86, said.

Schultz made out OK. He had 3 inches of water in his basement, a few leaky windows and lost some shingles. His next-door neighbor lost the front of the house. Large tree limbs and driftwood from Lake Erie slammed houses, collapsing walls. The gale force winds brought a surge of water that flooded basements, destroyed sea walls, patios and landscaping.

Some property owners don't know what to do.

Erica Sikorski said she spent her retirement upgrading the Bedrock Eatery, only to have the lake ravage it.

"The place is a disaster. It looks like a forest was once there," she said. 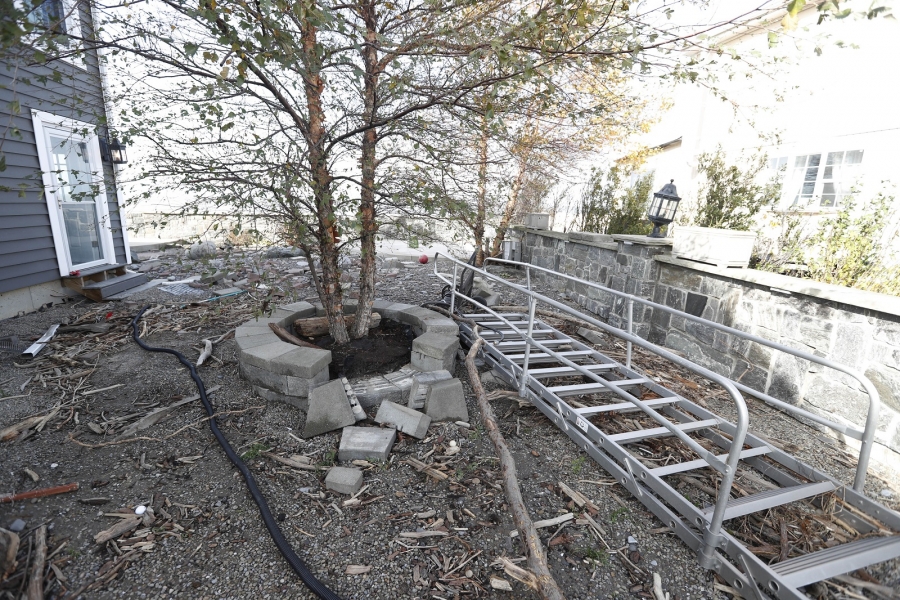 A Hoover Beach backyard covered with sand and stones from the lake. (Sharon Cantillon/Buffalo News)

The wind and waves ripped up dirt and sediment, destroyed the back patio and a fire pit. The building survived, she believes, but she had not made a thorough check to see if all the systems are working. Large boulders placed at the water's edge to prevent waves from damaging the property were tossed around like rocks, she said.

"We had a foot of water in the basement. Never has that basement flooded," she said. "It just takes the wind out of your sails."

"The lake levels are not going down, they're as high as they've ever been," Shaw said. "There really is no protection for these folks."

Schultz, who stayed in his house last February when huge ice mounds shoved toward the shore, stayed again and was up much of the night on Thursday. He said he has left the house during one storm, in the 1980s. His wife went to a family member's house last week, while their dog, Spencer, an 11-year-old Maltese, stayed with Schultz.

"He slept through the whole thing," Schultz said.

One of his neighbors, Leanne Powers, said she and her husband have evacuated their home, a former cottage they renovated and enlarged in 2013. She is frustrated because they have invested hundreds of thousands of dollars in their property and don't know where to go for help. She feels property owners on Lake Ontario have gotten attention and help with high water levels, but Lake Erie residents have not.

"Without my self-funded $250,000 breakwall," she said, "Route 5 would be completely flooded and impassable. We are privately funding essentially public infrastructure." 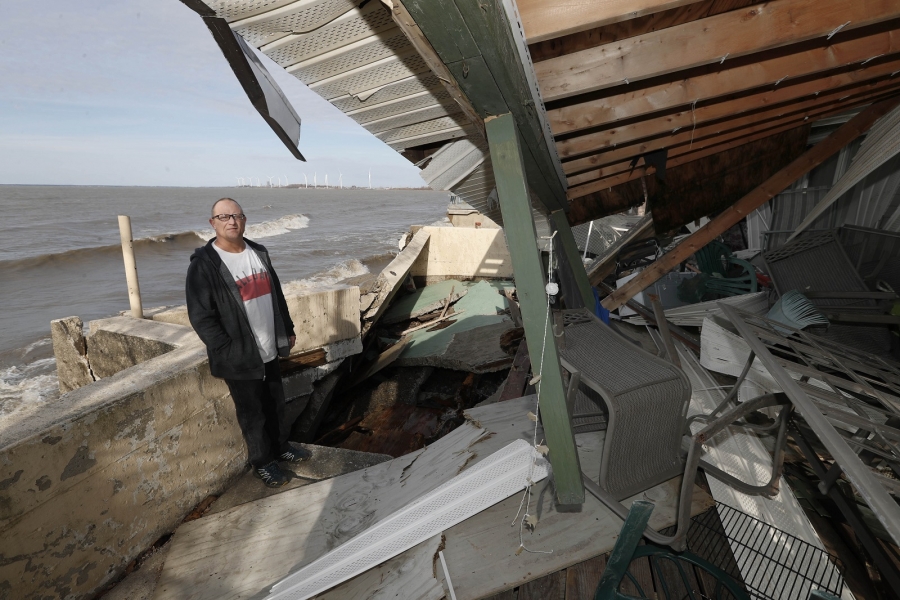 A breakwall caved in and collapsed the enclosed patio of Jim Stanton's home on Mid Shore Drive. (Sharon Cantillon/Buffalo News)

Jim Stanton has not yet been given an estimate on the damage to his Mid Shore Drive lakefront home from Thursday's storm, though he anticipated it will top $100,000. Stanton said his concrete breakwall was compromised, allowing water to crash onto an enclosure attached to his house.

"Some waves came through and busted through the three-quarter-inch plywood we had going over the perimeter of our porch and then it hit the inside glass doors," Stanton said.

He said his late father purchased the home 30 years ago, and the breakwall protecting it was built before then.

"This year is the only year since we've been here that the water has been right up to the wall all summer. People are saying it's 30 inches higher this year, the lake," Stanton added.

Hamburg Emergency Services Coordinator Sean Crotty said town highway crews are expected to be at Hoover Beach for the rest of the week cleaning debris from the curbs and roads. The town cannot go on private property to remove debris, he said.

"We can't go back behind people's homes with a picker and pull the logs off," he said. "We're doing what we can to help people."

Storms in December 1985 caused $1.3 million in damage to lakefront homes. One at Hoover Beach was demolished and the property turned over to the town. Crotty said the breakwall at that property sustained damage.

Schultz said while the 1985 storm was worse, he had 50 feet of beach front at the time. Today, because of rising lake levels, he has no beach.

"It's not going to get any better. If anything, it probably will get worse unless somebody steps in," he said. "God makes the decisions, we live by them."