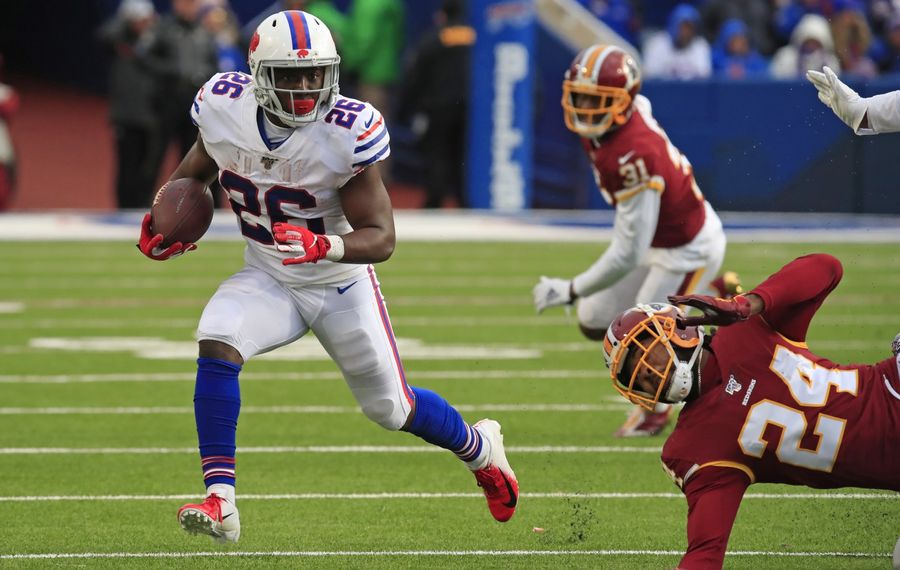 Fox play-by-play Chris Myers did my job Sunday during the Buffalo Bills’ 24-9 victory over the Washington Redskins Sunday in New Era Field.

By that, I mean he spent some time correcting himself, the role of a critic.

Myers had a worse first half than the Bills defensive line against Washington back Adrian Peterson.

Myers was much quicker to correct himself after calling Bills linebacker Tremaine Edmunds "Edwards."

The 6-2 Bills are 'doing something right,' but is it enough for postseason run?

After having such a solid performance in the Bills’ 31-13 loss to Philadelphia a week earlier, Myers’ miscues were a little surprising. However, he still has a strong excitement level on big plays and does a good job asking analyst Daryl Johnston appropriate questions.

I suspect the Myers comment that provoked Bills fans the most came after Fox’s cameras caught a Washington fan with a Santa Claus hat on.

“It is as cold as the North Pole here," said Myers. “(Sideline reporter) Laura Okmin is down on the field and we’re up in the booth looking for heat.” 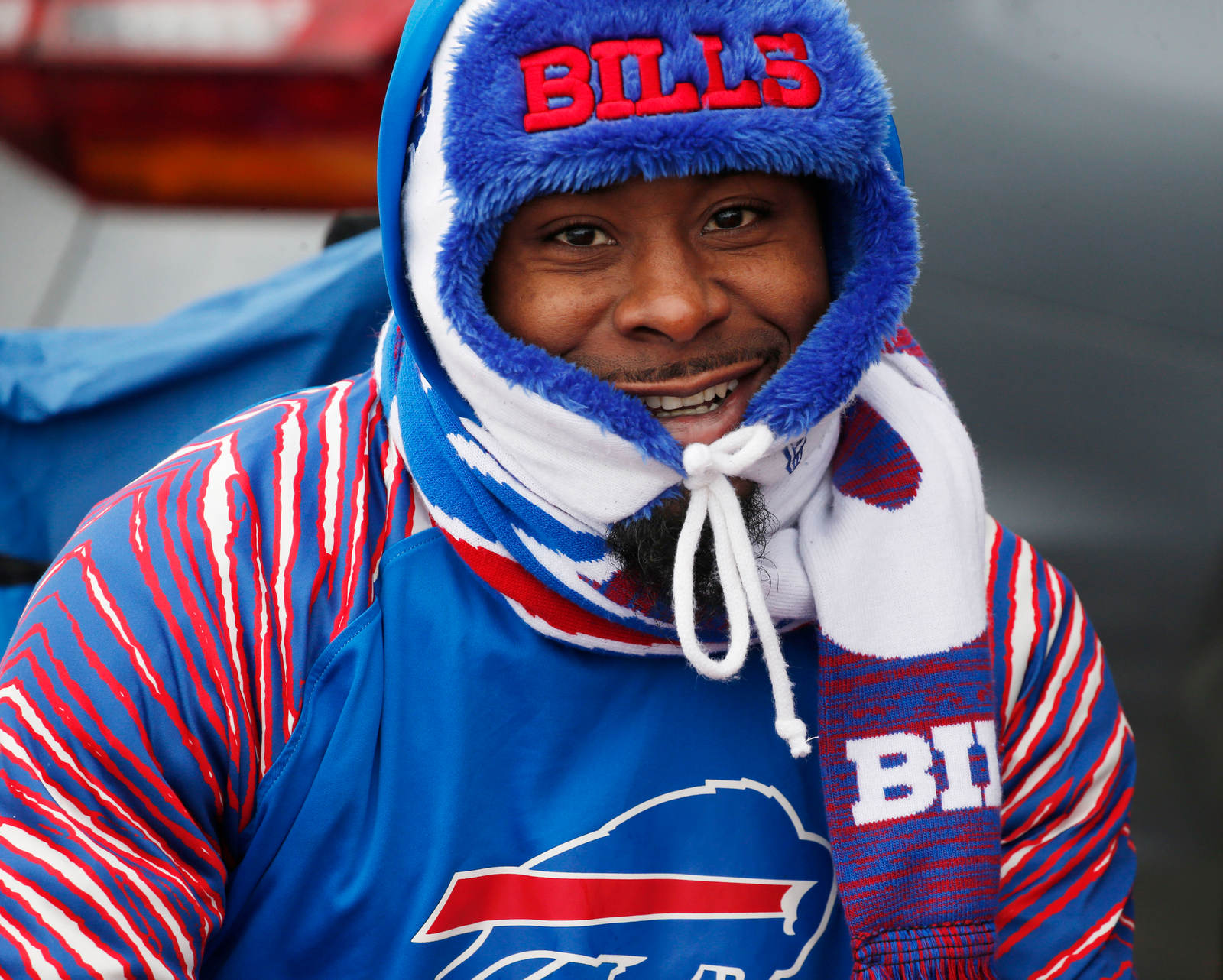 It may not have been North Pole cold, but it was cold enough for Darrin Jones of Buffalo to bundle for the the tailgate before Sunday's game. (Derek Gee/Buffalo News)

I can speak to the inaccuracy of that statement since I attended the game to give my son-in-law Jason from Washington, D.C., the Bills Mafia experience after giving him a Bills sweatshirt to blend in.

He had been warned by my daughter that he was going to be very cold. It was about 40 degrees and windy, which did make us a little thankful the game emphasized the running game, there were few penalties and it ended in 2 hours and 45 minutes. However, neither Jason nor I felt like we were anywhere near the North Pole, though we preferred watching the game again from the comforts of home.

You might have hoped that Johnston, a Western New York native, would have defended the area or at least mentioned to Myers how sensitive Western New Yorkers are to weather cracks. That wasn’t the Johnston omission that concerned me.

It was about the only thing that Johnston missed. He had as strong a game as he had a week earlier, noting key blocks, analyzing replays and questioning some coaching decisions.

He also showed his sense of humor after Myers noted that Haskins’ girlfriend helped him learn plays and prepare in his man cave. 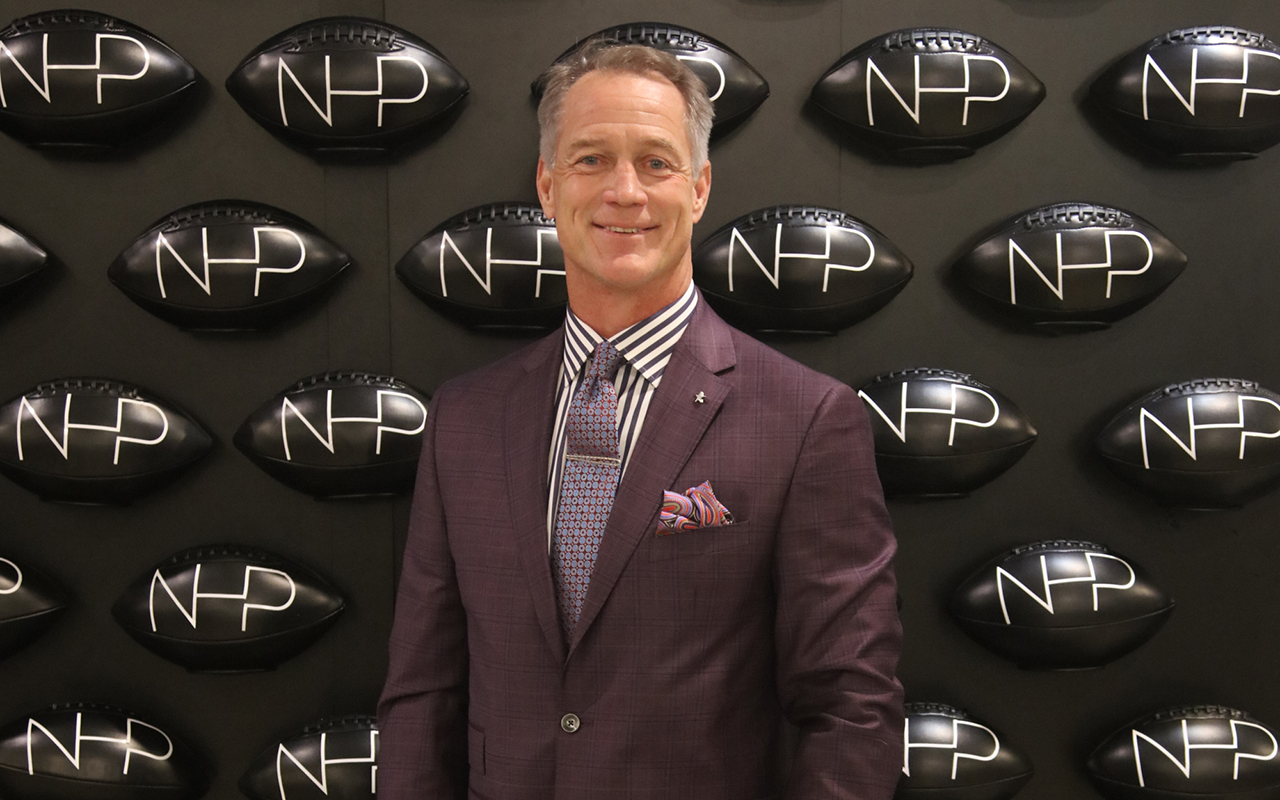 “Not to discount the input of his girlfriend,” said Johnston, before he explained another way the rookie quarterback prepared.

I’m not sure Johnston was trying to be funny, but I assume I wasn’t the only one laughing.

And then there was the play in which Bills tight end Dawson Knox was stopped on his behind short of the goal line on a catch that went to replay.

“One knee is two feet, (so) we can do one cheek is two feet then,” said Johnston.

That led Fox rules analyst Dean Blandino to tell Johnston that they refer to the area Dawson was down as the “backside.”

The Fans Get Some Love: Bills back Devin Singletary played so well that Johnston gave the Bills fan base some love for wondering why he wasn’t used more the week before against Philadelphia.

Listen to the Fans, Part 2: After a long incompletion to Brown on a play in which fans at New Era Field thought Norman was guilty of interference, Myers smartly wondered if McDermott would throw a flag because of a new rule allowing a challenge on the play. “It is tough to get a reversal,” he added. Looking at the replay after a commercial, Johnston noted that Brown’s legs “were wrapped up before the ball arrives.” And he added that Bills quarterback Josh Allen thought a Washington player was offside at the line of scrimmage. McDermott didn’t challenge the play, with Myers saying the Bills didn’t have time on the sideline to do it.

Houdini Moment: After Allen escaped a sack in the fourth quarter and threw a perfect pass that Brown dropped, Johnston hit the receiver pretty hard. “John Brown’s got to make this catch," said Johnston. "It is too great an effort by Josh Allen not to have a positive out of it." A few plays later, Brown redeemed himself on a first down sideline catch. 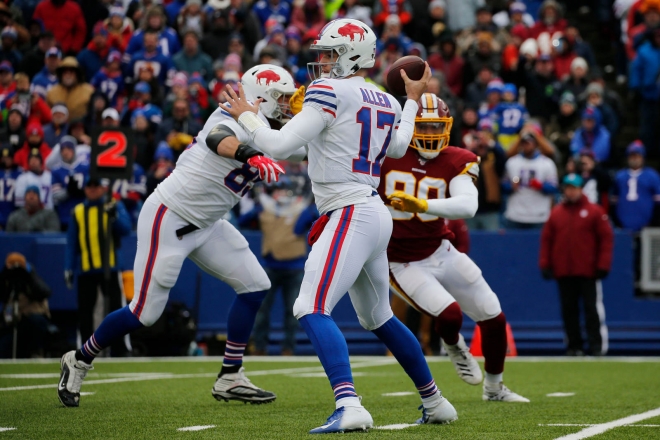 No Debate: I wish Myers had asked Johnston about Washington somewhat surprisingly taking a 10-yard holding penalty against the Bills to prevent them from trying a 45-yard field goal on fourth down. That was by no means a gimme kick considering the wind conditions. On the next play, Allen hit Brown for the first down on a third and 18 to set up the final, clinching touchdown. If Washington had declined the penalty and Stephen Hauschka had missed the kick, it still would have been a one-score game.

The Third Man: Johnston may have read Buffalo News sportswriter Mark Gaughan’s story about the need for the Bills to get a third pass receiving option. “Where is that No. 3 going to come from?” Johnston asked early in the game.

Family Report: Myers noted that the family of Singletary, the star of the game, came in from Florida to see the game and “got their winter gear on.”

Speaking Too Soon: After Johnston said he was impressed by the Bills defense against the run in the first quarter, Peterson broke three runs for 70 yards.

Clock Management: Myers frequently mentioned the ages of 30-something backs Peterson and the Bills’ Frank Gore. This was Myers’ best line: “We turned the clocks back last night, but the hands of time are not affecting them.” Continuing the theme, Myers later said Peterson and Gore “both are stiff-arming Father Time.” And then there was this gem about Peterson directed at Johnston: “When you and I are using walkers, he’ll still be running.”

Allen Takes a Shot: After Allen missed Brown for a short touchdown reception, Johnston correctly noted the quarterback was late on the throw and then threw it high and wide. 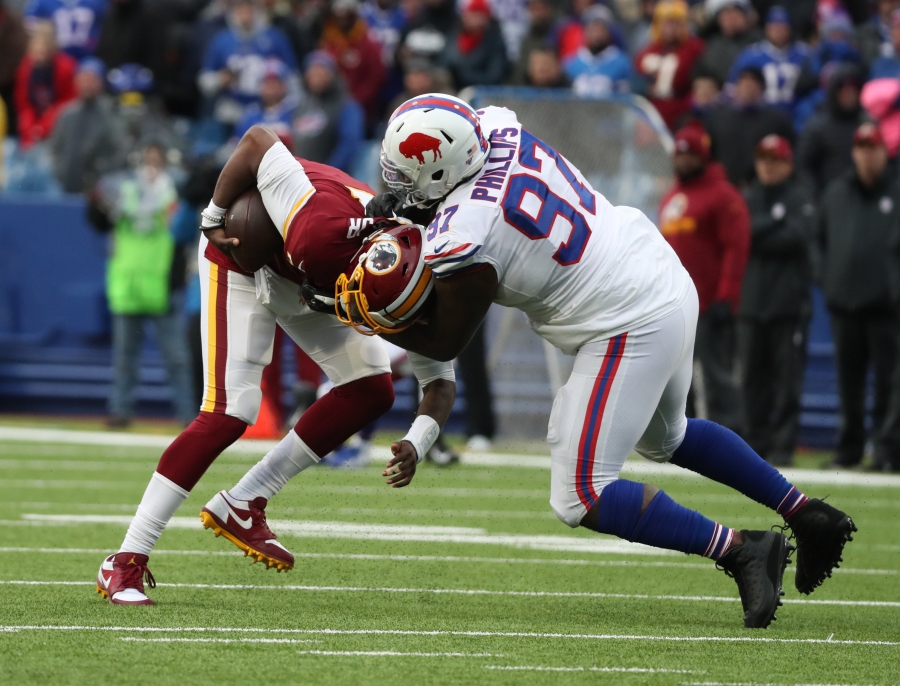 Heavy Comment: After Long made that comment, Fox studio analyst Terry Bradshaw said “everybody looks like somebody. I look like Brad Pitt, minus the hair, maybe 80 pounds heavier, my face is a little too fat.”

Windy Decision: When the Bills went for it on a fourth-and-one rather than try a long field goal at the start of the third quarter, Johnston said “I’m sure” Bills coach Sean McDermott decided against the kick because it would have been in the direction where the wind “really played havoc” on kicks. The fourth down run by Gore failed, which made the game more suspenseful until late in the fourth quarter.

A Costly Change: Before the fourth-down run failure, the officials called a stoppage to measure for a first down. Later, Johnston noted the Bills changed from Singletary to Gore during the stoppage.

Throw It Out There: Noting the Washington conservative approach with Haskins in the third quarter, Myers said: “At some point, he is going to have to throw the ball to win this game for Washington.” He never did.

A Comment as Cold as the North Pole: In the fourth quarter with the score 17-9, Myers noted that the Bills wanted an impressive victory and added “they’re just hanging on” against a 1-7 team.

Great Timing: After Johnston noted that Bills linebacker Lorenzo Alexander said the defense needed to make game-changing plays, cornerback Tre’ Davious White sacked Haskins on a third-down play at about the Washington 3-yard line, a play that set up the clinching touchdown.

Reality Check: After the win gave the Bills a 6-2 record, Johnston added a sobering reminder. “They’ve got to get this running game cleared up (defensively),” he said. “You’ve got some good running games” coming. Then he ticked off the names of Cleveland’s Nick Chubb, Denver’s Phillip Lindsay, Dallas’ Ezekiel Elliott and Baltimore’s Lamar Jackson.