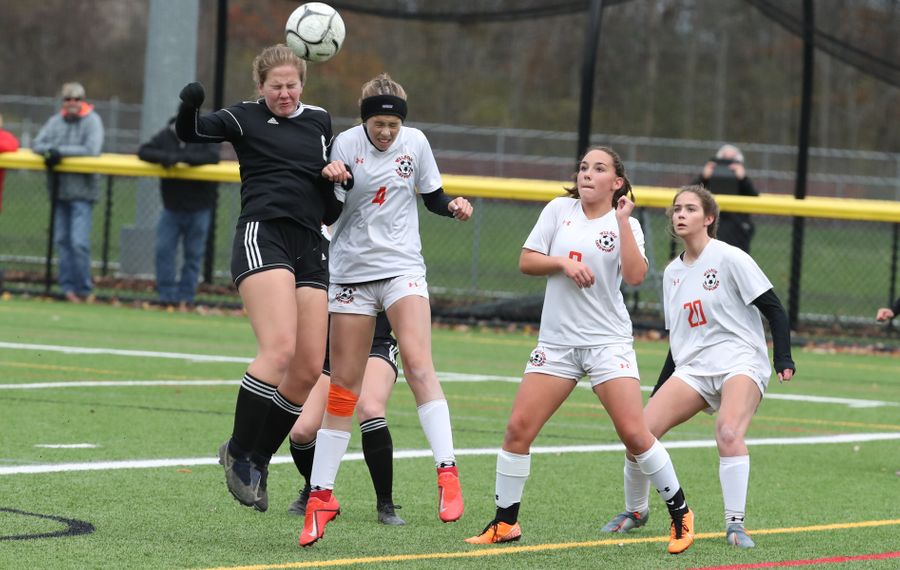 Three of Section VI’s top our goal scorers in girls soccer were on display Saturday in the Class B-1 and B-2 championship games held at Williamsville East High School.

And all three proved their standing.

No. 1 Allegany-Limestone’s Alyssa Spring, who leads the section in goals with 38, was the main catalyst in the Gators’ 7-0 triumph over No. 6 Wilson in the B-2 game.

Meanwhile in the B-1 affair, sisters Morgan (fourth-place) and Grace Kulniszewski (second-place) combined for five goals leading No. 2 Iroquois over No. 1 City Honors, 6-2, for their first-ever sectional championship.

The Gators and the Chiefs will face off for the Class B overall title Tuesday at 6 p.m. back at Williamsville East.

“It means to a lot,” Iroquois coach Heather Ross said. “It means a lot to us as a coaching staff, it means a lot to the girls. It’s history. It’s one of the greatest feelings you could ever have.”

Morgan Kulniszewski opened the scoring the less than two minutes into the game. A little over halfway through the half, the Chiefs scored two more goals less than a minute apart. Older sister Grace added her second goal later to give her team the 4-0 lead into halftime. Leah Streety had the other Iroquois goal.

The Centaurs, who were making the Buffalo Public Schools’ first sectional championship appearance in girls soccer, got on the board early in the second half as Natalie Milne found the back of the net.

“It’s really special for us to be here,” City Honors coach Jason Milne said. “We’ve been building our trust all season and came together at the right point. I owe a great of gratitude to our non-league games. It afforded us the opportunities to play good teams and compete at the sectional level.”

“It feels fantastic,” said Morgan Kulniszewski “I like the fact that we just made school history and I was a part of it. We just knew that we had to prove that we could do it.”

Spring also knotted a hat trick for her team as Allegany-Limestone is now one game away from their third-straight state semifinal appearance, including winning the Class C state championship in 2017.

“I don’t mean to diminish her accomplishment but her job is to score,” MacArthur continued. “And she loves her job and does it well.”

Spring was even tougher on herself after the game.

“I thought it could’ve been better,” Spring said. “I tripped over the ball multiple times. Overall, it was okay.”

That attitude might make sense when you consider the entire starting lineup consists of seniors. It appears the Gators have a greater sense of urgency this time around.

“We want to go back to states,” Spring said. “Since there are 19 of us, we really just want to go out with a bang.”

A-L also got things going quickly as Kaitlyn Higby found the net just over five minutes in. Spring put in her first as the Gators had the two-goal lead the first 10 minutes.

Molly McClelland scored her first of two goals on the day on a shot from 30 yards away. Spring scored again to take the 4-0
lead into the half. Abbey Gardiner was the other Gator goal-scorer.