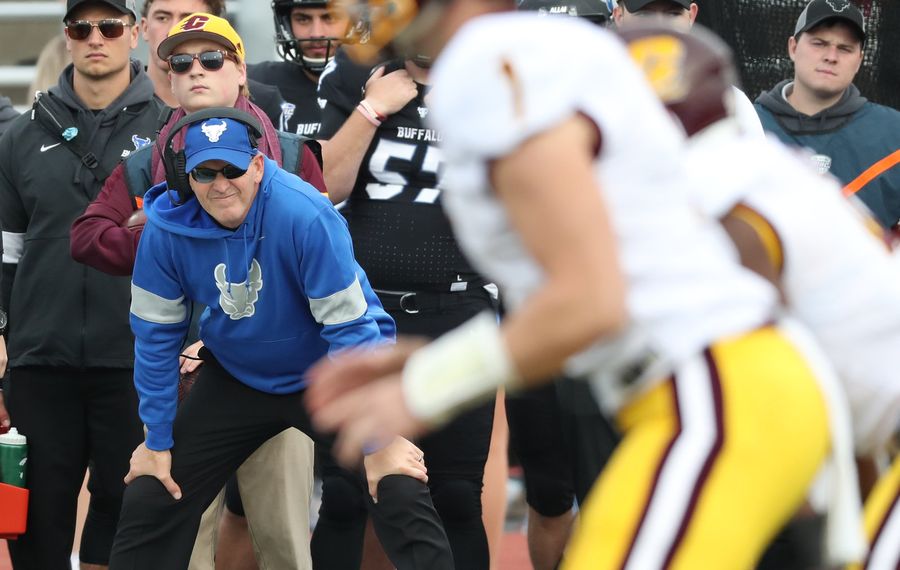 Last time out: UB defeated Central Michigan, 43-20, on Oct. 26 at UB Stadium. Jaret Patterson ran for 149 yards and a touchdown on 28 carries for the Bulls.

Eastern Michigan lost to Toledo, 37-34, in overtime on Oct. 26 at the Glass Bowl in Toledo. Eagles quarterback Mike Glass III was 21-for-37 passing for 286 yards and a touchdown.

Finding momentum: A win last weekend against Central Michigan gave the Bulls back-to-back wins for the first time this season, and lifted the Bulls into a tie for third place in the MAC East Division with Kent State.

Keep running: The Bulls continue to be one of the MAC’s top rushing offenses after recording 197 yards on 55 carries against Central Michigan. The Bulls are second in the MAC in average rushing yards per game (221.0), and are third in the MAC and 20th in the nation as of Friday in rushing yards (1,768).

Patterson is third in the MAC with 835 yards on 159 carries, and Kevin Marks is eighth with 640 yards on 149 carries. Marks, a redshirt sophomore, needs 15 yards to become the 11th UB running back to rush for 1,500 career yards. As of Friday, the Bulls rank sixth in the nation with 396 rushing attempts; Air Force leads with 480.

Getting defensive: UB’s defense continues to be its hallmark. The Bulls have the MAC’s top defense, allowing an average of 304.3 yards per game (17th nationally), and their defense forced Central Michigan into five turnovers (two interceptions, three fumbles). UB is one of eight teams nationally to recover at least 10 fumbles.

UB also leads the MAC and is 10th in the nation in rushing defense (92.5 yards per game) and has allowed less than 100 yards rushing in five of its eight games, including a season-low 3 yards Oct. 19 at Akron.

Hitting the road: UB plays its third road game in six weeks, and the Bulls play at Rynearson Stadium for the first time since a 37-27 loss on Oct. 11, 2014. The Bulls have yet to win at Rynearson Stadium, which is the only MAC stadium in which fifth-year UB coach Lance Leipold has yet to coach a game.

For the foes: Eastern Michigan boasts the MAC’s most prolific pass offense, averaging 289.8 yards per game and the Eagles have thrown for a conference-best 18 touchdowns. They’ll face a UB pass defense that is fourth in the MAC (211.8 yards per game).

Glass has played in seven of the Eagles’ eight games and leads the MAC in passing average (270.9 yards per game on 164 of 255 passing in seven games). Glass is third in the MAC with 15 touchdown passes, but he’s been intercepted eight times, the most for a MAC quarterback.