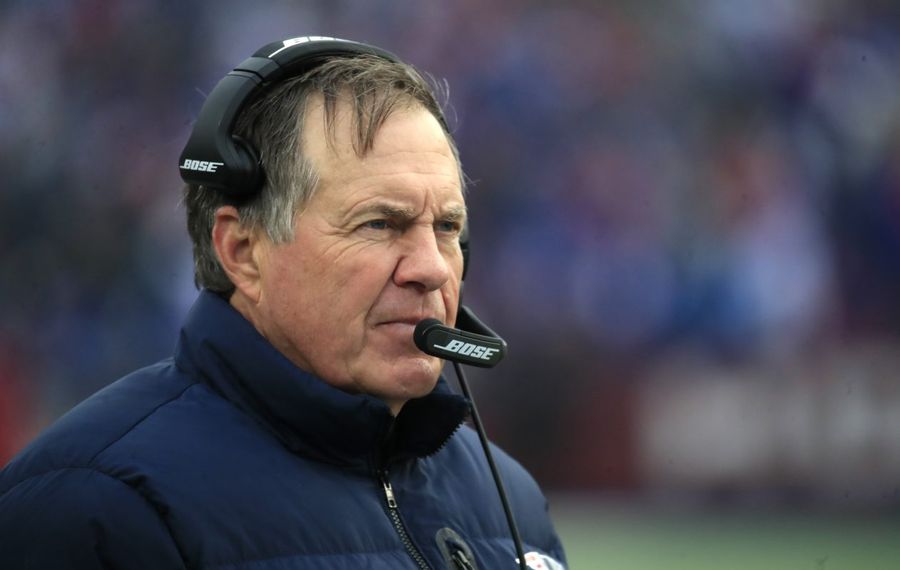 Although he’s not listed as the defensive coordinator, Bill Belichick is getting much of the credit for the New England Patriots’ defense, which may be performing better than any of his previous units.
The Patriots are allowing a league low 234.0 yards per game, admittedly against mostly low-power offenses, and are No. 1 in taking the ball away from opponents with a plus 17 turnover margin (25-8).
Not only is New England’s game at Baltimore the most interesting on the Week Nine schedule, what’s intriguing is wondering what will be Belichick’s plan to contain Baltimore quarterback Lamar Jackson, who is 10th in the league in rushing yards, which has helped in the effectiveness of his passing for 11 touchdowns. Jackson’s play has helped Baltimore to a No. 2 ranking in offense in the NFL.
Belichick’s reputation is that he will find a way to take away an opponent’s No. 1 offensive threat. Surely, defensive coordinators all over the NFL be interested in what he comes up with to neutralize Jackson or perhaps whether he saves his best plan for the possibility that the teams will meet again in the postseason.
Four other games on the schedule match teams with .500 or better records, headed by the Minnesota Vikings’ visit to Arrowhead to face the Kansas City Chiefs. At the other end of the spectrum, perhaps the two worst or worst-performing teams in the league will be on display when the New York Jets and Miami Dolphins meet in the Tank Bowl in South Florida.
A capsule look at the rest of the Week Nine games:

Game of the day
Patriots (8-0) at Ravens (5-2)
TV: NBC, 8:20 p.m.
The line: Patriots (-3 1/2).
Record ATS: Patriots 6-2; Ravens 3-4.
Over/under: 44.
Times over/under: Patriots 5/3; Ravens 4/3.
The scoop: Except for Bills, this is only team with winning record New England has faced so far and they haven’t faced an established veteran QB since Ben Roethlisberger in opener. So that 234 ypg defensive stat may need validation. It’s matchup of No. 2 ranked Ravens offense (434.8) against No. 1 defense.
Outlook: Belichick is 6-1 against his former team (he coached them when it was in Cleveland), John Harbaugh is 1-4 versus Pats according to NFL, which conveniently overlooks Harbaugh and the Ravens’ 2-1 mark in postseason against New England since 2008. Patriots, 28-27.

Top attractions
Colts (5-2) at Steelers (3-4)
TV: CBS, 1 p.m.
The line: Pick’em.
Record ATS: Colts 5-2; Steelers 4-3.
Over/under: 42 1/2.
Times over/under: Colts 4/3; Steelers 3/4.
The scoop: Colts came from 13-3 down to defeat Broncos, 15-13, last week after which Denver QB Joe Flacco, now on IR, questioned conservative approach of team that seems headed nowhere. ... Not time to give up on Steelers yet. As suspected, even without Ben Roethlisberger they are still as nasty and proud as ever and they have some young playmakers (WR JuJu Smith-Schuster and LBs Devin Bush and T.J. Watt) who can win games. QB Mason Rudolph isn’t bad either.
Outlook: Colts have been winning on the edge all season but getting by like that against Steelers at Heinz Field not a good recipe. Also Indy will be without WR T.Y. Hilton, one of their key playmakers. Steelers, 30-27.

Vikings (6-2) at Chiefs (5-3)
Kickoff: 1 p.m.
The line: None.
Record ATS: Vikings 5-3; Chiefs 3-5.
Over/under: None.
Times over/under: Vikings 3/5; Chiefs 4/4.
The scoop: KC has lost three in a row at home. Vikings and Kirk Cousins are on a roll, and the QB now leads NFL with 115.2 passer rating. Lot of people jumping on New Orleans bandwagon, but Minnesota may have just as many offensive weapons and a defense that measures up as well. ... KC combination of speed at WR and TE Travis Kelce can be lethal and is what makes Patrick Mahomes so lethal. Mahomes practiced some this week, but it listed as questionable.
Outlook: Matt Moore filling in for Mahomes is not why KC lost to Packers last week. Chiefs, 27-24.

Packers (7-1) at Chargers (3-5)
TV: CBS, 4:25 p.m.
The line: Packers (-3).
Record ATS: Packers 5-3; Chargers 2-6.
Over/under: 46 1/2.
Times over/under: Packers 7/0/1; Chargers 2/6.
The scoop: Green Bay looking for 4-0 sweep of AFC’s West Division, the strongest in a weak conference. ... Aaron Rodgers having one of his best years (16 TDs, 2 INTs, 2,324 yards, 106.7 rating) and doesn’t seem to miss an opportunity to rub it in the face of former coach Mike McCarthy. ... Chargers ended losing streak last week, but it took a flubbed field goal on last play in Chicago to do it. Dignity Health Sports Park in Carson, Calif., will look Packer Green as Midwest transplants take over Chargers’ home stadium.
Outlook: Hard to place much faith in Chargers even with talent at their disposal. Packers, 31-21.

Texans (5-3) at Jaguars (4-4)
TV: CTV, NFLN, 9:30 a.m.
The line: Texans (-2 1/2).
Record ATS: Texans 3-5; Jaguars 5-3.
Over/under: 47 1/2.
Times over/under: Texans 3/5; Jaguars 4/4.
The scoop: Last game of 2019 series in London. This one at Wembley Stadium. ... J.J. Watt’s injury makes it a less stressful day in the pocket for Jax quarterback Gardner Minshew, who continues to make passing plays on the run. Despite another big game from Deshaun Watson, Texans trailed whole game at home against Raiders last week before pulling out 27-24 victory with late pass to monster tight end Darren Fells.
Outlook: Jaguars are 3-2 in London since they started playing “home” games there and usually play well in the Olde Towne. Jacksonville, 20-16.

Titans (4-4) at Panthers (4-3)
Kickoff: 1 p.m.
The line: Panthers (-3 1/2).
Record ATS: Titans 4-4; Panthers 4-3.
Over/under: 41.
Times over/under: Titans 3/5; Panthers 5-2.
The scoop: Tennessee has won two straight since loss to Bills. Panthers were humiliated by 51-13 loss at 49ers last week but score was much worse than actual difference in play. Carolina goes with backup Kyle Allen at quarterback with Cam Newton’s return still off. Much-maligned Ryan Tannehill has to become Titans’ savior since team has seemed to have lost faith in Marcus Mariota. ... Tennessee is well-balanced team that is coming on and can’t be counted out of AFC wild-card race.
Outlook: A defensive struggle but Titans have more weapons. Tennessee, 17-13.

Lions (3-3-1) at Raiders (3-4)
Kickoff: 4:05 p.m.
The line: Raiders (-2).
Record ATS: Lions 4-3; Raiders 4-3.
Over/under: 51.
Times over/under: Lions 5-2; Raiders 3/4.
The scoop: Lions got back on winning side after consecutive tough losses to Chiefs, Packers and Vikings, but they had difficulty putting away Giants on road last week. Jon Gruden’s Raiders being overlooked, but they are starting to shape up. They outplayed Texans on road last week before tough loss.
Outlook: Nothing comes easy for the Lions. Raiders, 31-24.

Best of the rest
Redskins (1-7) at Bills (5-2)
TV: FOX, 1 p.m.
The line: Bills (-10).
Record ATS: Redskins 3-5; Bills 4-3.
Over/under: 36 1/2.
Times over/under: Redskins 3/5; Bills 2/5.
The scoop: One that has been penciled in as a Buffalo win for five weeks now, but one Bills absolutely can not afford to lose. They figure to be favored in only three more the rest of the way. A repeat of last week’s Eagles game could lead to upset by a Washington team. Rookie QB Dwayne Haskins will get first NFL start for Redskins, and that weighs in Bills’ favor.
Outlook: Unless Allen gets ball into the air more and runs less it will be dogfight for Bills. Buffalo, 20-17.

Bears (3-4) at Eagles (4-4)
Kickoff: 1 p.m.
The line: Eagles (-4 1/2).
Record ATS: Bears 2-5; Eagles 4-4.
Over/under: 43 1/2.
Times over/under: Bears 2/5; Eagles 5/3.
The scoop: It’s 42nd meeting of old-Line NFL rivalries which Bears have dominated (28-12-1), but Eagles have won last three. ... Bears had win in their pocket at home against Chargers last week but Eddy Pineiro missed field goal from 41. That got him released. Probably for his own safety, alone. Miss took some of the heat in Chicago off QB Mitch Trubisky and coach Matt Nagy, but not much. ... Eagles looked like a team that lost its confidence against Bills last week, until Josh Allen fumble woke them up. However, rookie RB Miles Sanders, star of win in Orchard Park, is injured now.
Outlook: Eagles won’t bully Bears the way they did against the Bills, but Philadelphia, 24-16.

Buccaneers (2-5) at Seahawks (6-2)
Kickoff: 4:05 p.m.
The line: Seahawks (-6 1/2).
Record ATS: Bucs 2-5; Seahawks 3-5.
Over/under: 52.
Times over/under: Bucs 6/1; Seahawks 5/3.
The scoop: Tampa Bay has not played a home game since Sept. 22. Who makes these schedules? ... Jameis Winston of Bucs had 301-yard passing game at Tennessee last week, but team still lost. Turnovers still killing Tampa Bay. Mike Evans, not Michael Thomas of Saints, may be NFL’s best active receiver but his 11-catch, 198-yard, 2-TD game last week couldn’t bail his team out. ... Seattle built 24-0 lead at Atlanta, then nearly blew it against backup QB Matt Schaub, who passed for 460 yards by putting it up 52 times against mostly soft defenses.
Outlook: Last time S-Hawks played at home they were smacked by Lamar Jackson and the Ravens. Probably won’t happen again this week but Bucs’ coach Bruce Arians knows Seattle from his time as coach of Cards. He shouldn’t be awed, but Seattle, 23-20.

Browns (2-5) at Broncos (2-6)
Kickoff: 4:25 p.m.
The line: Broncos (-1 1/2).
Record ATS: Browns 2-5; Broncos 4-4.
Over/under: 42.
Times over/under: Browns 2/6; Broncos 2/6.
The scoop: Veteran Cleveland writer Tony Grossi has been dealing with Browns’ headaches and failures for years (The Drive, The Fumble, Modell’s move to Baltimore) so Baker Mayfield’s pout and walk out of press conference this week is no big deal. Just one more distraction for flop of a season in Cleveland. Mayfield’s 12 INTs and 67.8 passer rating may have something to do with it. ... Brandon Allen, third-year man from Arkansas, will make first NFL start in place of Joe Flacco for Denver.
Outlook: Denver defenders force Mayfield into more errors. Broncos, 17-10.

Cowboys (4-3) at Giants (2-6)
TV: ESPN, Monday, 8:15 p.m.
The line: Cowboys (-7).
Record ATS: Cowboys 4-3; Giants 4-4.
Over/under: 48.
Times over/under: Cowboys 4/3; Giants 4/4.
The scoop: Cowboys coming off bye week after their most impressive win of season, 37-10, over Eagles. Daniel Jones of Giants passed for four TDs with no interceptions against Lions last week in comeback that came up short. New York had dropped four in a row after two-game win streak. Cowboys have won last five in rivalry and have 67 wins all-time in rivalry that began with expansion Cowboys pulling off a 31-31 tie in 1960 with little Eddie LeBaron at quarterback.
Outlook: League-leading Dallas offense should roll over Big Blue, 35-20.

Dog of the day
Jets (1-6) at Dolphins (0-7)
Kickoff: 1 p.m.
The line: Jets (-4 1/2).
Record ATS: Jets 1-6; Dolphins 3-4.
Over/under: 41 1/2.
Times over/under: Jets 2/5; Dolphins 2/5.
The scoop: Dolphins sold off another piece this week, sending Kenyan Drake to Cardinals. Though front office has sabotaged Miami season with tanking strategy, players still performing for coach Brian Flores, a Brooklyn guy who is not intimidated. ... Adam Gase’s win in power struggle in New York has created a mess with the Jets. Practically giving all-pro caliber DE Leonard Williams to Giants this week another sign of surrender. ... QB Ryan Fitzpatrick of Dolphins goes up against one of his many former teams. He can make Fish dangerous despite team’s lack of talent.
Outlook: If Miami is going to win one, this might be it. And Fish are home underdogs, Dolphins, 20-13.