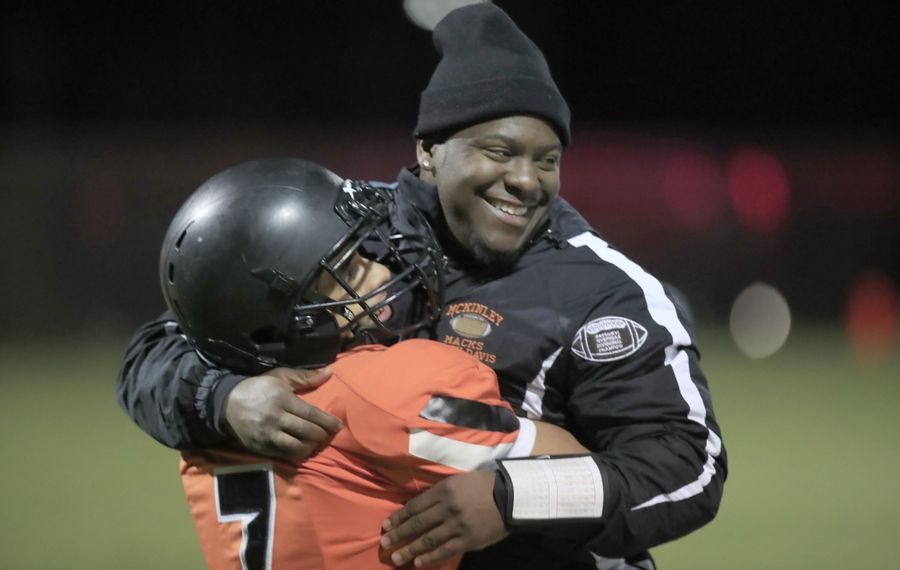 Two men vying for the same coaching job sometimes can lead to hard feelings and rash decisions brought on by ego, leading to a break up.

That hasn’t happened with McKinley football’s Brian Davis or Micah Harris. Davis and Harris are in this together and have been aligned ever since both applied for the same job. Davis is the current head coach, while Harris is an assistant and runs the defense after serving as interim head coach last year.

“We made it a family atmosphere,” Harris said. “We’re really home boys at the end of the day.”

“There was never any hostility,” Davis said. “We were always on the same page. … We’re always talking football and the things we wanted to accomplish. It was almost like you were meeting another half of you. We had a lot of similarities, but we also had a lot of differences, which is what I think made us jell so well, so quickly.”

The main thing the two former scholastic stars wanted: They wanted to create a winning environment and restore some of the luster to one of the signature programs of the former Harvard Cup League.

That has happened for unbeaten McKinley, which achieved history by reaching a Section VI final for the first time in program history.

Since fate has a unique sense of humor, the team the Macks (9-0) will play for the Class A championship at 3:30 p.m. Saturday at New Era Field is another Harvard Cup alum in unbeaten South Park (9-0). This marks the first time two Buffalo Public Schools football teams will meet in a sectional final at the home of the Buffalo Bills.

It’s great for McKinley, including alumni on the coaching staff. Harris is a 2003 grad who played on the Macks’ 1999 Harvard Cup championship team. Other assistants who buckled chin straps for the Macks include Mikel Milton, John Robinson, Nate Burnett and Troy Williams.

Williams scored the game-winning touchdown the last time McKinley won the Harvard Cup in 2007. Milton also was a member of that team.

“To me and the rest of the alumni, it’s extremely heart-warming to be able to work with kids at the school we went to,” Harris said. “It’s history for our school. We love being a part of this.”

With a leadership core of coaches creating a family atmosphere, that vibe proved to be contagious among an athletic, hungry group of players determined to show folks they’re indeed contenders despite an unknown factor heading in the season.

“We made it a family atmosphere,” Harris said. “We showed them we (Davis and me) could be brothers.”

The Macks came in off a 4-4 season that included a trip to the postseason but graduated their top two players. Their absence along with Davis not being appointed head coach by the school district until three weeks before the start of the season meant folks outside the program didn’t know what to expect from the Macks.

The team knew what it had – speed, talent, determination and unity with the latter starting at the top.

Davis, a Williamsville North graduate, played collegiately at Edinboro and worked out for some NFL and CFL teams. Harris joined the Marines after high school, then went to college before returning to his alma mater as an assistant and permanent substitute teacher.

Circumstances resulted in Harris being named interim head coach roughly a week before the start of 2018. Harris got a smart, resilient group to play together. Last season, Davis served as an assistant with Bennett.

Davis and Harris both had similar ideas as him as to how to improve the program --- including implementing a strength and conditioning program that the kids bought into, which happened. They share similar philosophies on coaching offense and defense, with Harris using a fast, aggressive style analogous to what he learned while playing for Bill Johnson’s McKinley teams.

This triumphant season likely doesn’t happen without the coaches first gaining each others' trust, then the players' -- convincing them the sky’s the limit so long as they work together instead of as individuals.

For example, the Macks have 11 players who have rushed the ball with six having 24 or more carries. Takeo Funderburk leads in rushing attempts (49) and yards (643). Seven average double-figures in yards per carry. Most teams have a clear No. 1 or top two runners who shoulder the load.

“I think the situation between Brian and me also showed them how to be humble,” Harris said. “This year I believe our team is a team full of friends. There are no egos. They’re just kids wanting to win.”

The same holds true for the coaching staff.

“Honestly, I came in with a game plan offensively and defensively, propose it to the returning coaches and they took it and ran with it,” Davis said. “I coached them up on certain things, they coached me up on certain things. … They made things a lot easier because they knew the kids.

“They were helpful, especially Micah. I don’t think I could’ve done this without him.”

Another first for Sparks

The Sparks were the first BPS school to advance to a sectional final (about 18 hours before Bennett) in 2014. They were the first to win a Section VI title in 2015, a state championship (also in 2015) and were also the first to have one of its players win the Connolly Cup (Tyree Parker in 2015) and Trench Trophy (Jeremiah Sanders in 2017).

“We like to pride ourselves on firsts,” Delaney said. “That stuff is great, but we will try to focus on playing the game and put in a plan to play well that Saturday.”

-- Lancaster’s run of three straight Section VI Class AA championships began with a title-game win over Orchard Park in 2016. It’s fitting that the two meet, again, with the Quakers reaching the final for the first time since that 27-7 loss.

It wasn’t easy for OP, which got pushed and then some by an undermanned Bennett team during a 21-14 decision. The Tigers, who played without their top two players in D’Jae Perry and Justin Campbell, led 14-7 in the third quarter before Jack Sharp engineered a comeback.

The battle-tested Legends have been road warriors this postseason, winning at Clarence and then tackling top-seeded Jamestown in the semifinals Friday.

-- Bennett almost made it three former Harvard Cup teams reaching New Era Field as last year’s Class AA runner-up made OP work for its spot in the final, holding a 14-7 lead in the third quarter while playing without Perry and Campbell. Perry missed the game with a knee injury, while Campbell sat out due to being ejected from the team’s quarterfinal win due to a helmet-to-helmet hit. Bennett tried to appeal the automatic one-game suspension, only to learn that there isn’t an appeals process for targeting ejections.

-- For those keeping track, Wilson will play for a title for the first time since 1990. Albion is in its first final since 2002. Western New York Maritime/Health Sciences is the first charter schools program to reach a Section VI final – achieving the feat in just its second season.