Rosemary Maloney-Hoffman is undeterred. She still believes in magic, even as the rest of Western New York is taking down the last soggy, windblown remnants of Halloween.

Throughout her life, magic has transcended seasons. Certainly, it explains why Rosemary would join her parents in dressing up as clowns each year for Halloween while she was growing up in Cheektowaga. On the porch, they would await the trick-or-treaters who knew, in the way children always know, about this house in the neighborhood that was always a little unusual at Halloween.

Once the kids started to arrive, the late James E. Maloney, Rosemary’s dad, would provide some actual magic, creating illusions with coins or cards that achieved what seems almost impossible: For a moment, magic was enough to make the children forget candy and focus on sheer wonder.

This week, as Rosemary prepares to begin chemotherapy treatments for cancer of the pancreas, it is a major piece of the foundation that gives her hope.

Rosemary, who carries on her father's passion for magic, is a board member, membership chairperson and research historian for the Gene Gordon-Karl Norman Ring 12 of the International Brotherhood of Magicians, founded in 1939 and eventually named for a couple of legendary Western New York magicians.

She is also in charge of the ring’s 80th anniversary celebration, which officially hit its high point in October, usually Rosemary's favorite time of the year.

“People don’t realize what magic means in Buffalo,” she said, describing this city as a big league destination for magicians. The ring is thriving here, the opposite of one of those fading organizations that nostalgically recalls some distant heyday.

Membership hovers around 80, and many of those women and men show up for regular meetings and "teaching tables" on the first Monday of each month, at 6:30 p.m. at the Screening Room in Amherst.

That means the next one is Monday. It is a chance to watch in astonishment as, say, the magician called Jimmy C pauses from a walk across the room to provide such casual marvels with a Kennedy half-dollar that the members hope it might just cause you to decide to stick around.

As always, Rosemary intends to be there. Indeed, it means so much to her that she arranged her schedule carefully to make sure she could begin chemotherapy a day or two later in the week.

At 62, she is retired following decades as a special education teacher in Cheektowaga. Last spring, after she went in for routine bloodwork, her doctor told her she had cancer of the pancreas, a disease that she said is now at stage 4. 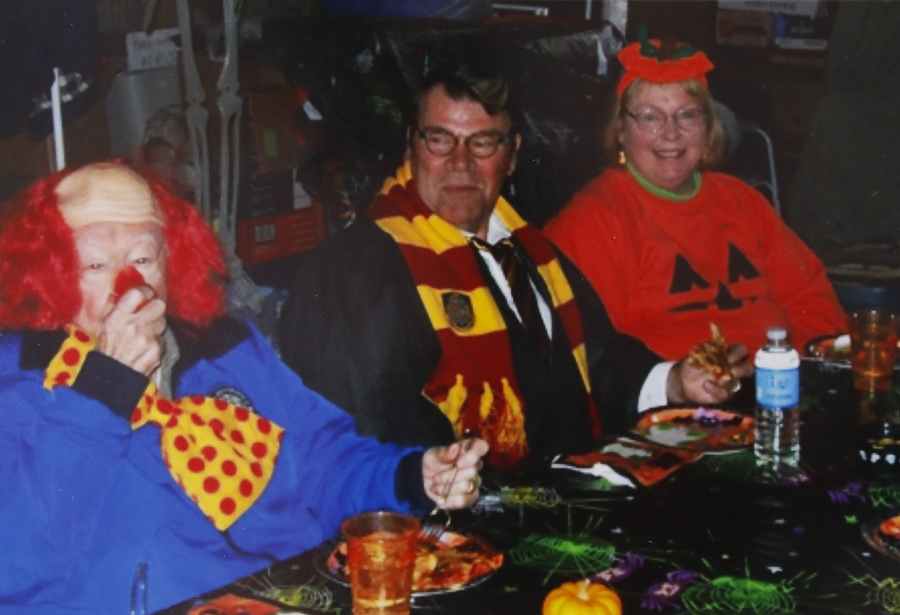 That news came amid two years of shock waves. Her dad, a Syracuse native and a pillar of the magicians ring, died 20 months ago. She lost her husband David to cancer in 2017, only 11 years after they were married. Both men were buried in their magician's tuxedos.

Giving in to all the struggle is not in Rosemary's nature. Life, she said, is either light or darkness, and you make your choice about which one you choose every morning.

Wednesday, on the day before Halloween, she wore a pumpkin outfit at her Lancaster home to celebrate the season, even as she worked out her chemo schedule by phone. She brought out much of her dad’s old magic equipment and spread it across her dining room table – a stuffed rabbit in a hat, multiple decks of cards and a big stuffed bear awaiting a ventriloquist – and then she said what she needed to say about her illness.

Beyond all else, she has watched this disease claim too many people she loves, and she sees one way to honor their memory.

“I’m fighting for all of them,” Rosemary said.

With that out of the way, what she really wanted to talk about was magic. Gene Gordon became famous in greater Buffalo for his illusions at Eddie Fechter’s Forks Hotel in Cheektowaga, and Karl Norman, another legend, was a close friend of her dad’s.

She and her brothers, James and Joseph Maloney, grew up accustomed to seeing Norman around the house. Her father had a job with the Linde Air Products division of Union Carbide while her mom, Anna Maloney, worked nights as a registered nurse. Rosemary remembers – on the rare nights when her mother had a chance to sleep – how her dad would sometimes wander in to stand over her bed and say:

There was this new bit of magic she just had to see.

“She was patient,” Rosemary said. The way her mother saw it, if your spouse’s worst trait is a love for magic, you are not doing so bad in life.

Gary Rog, a fellow member of the magicians group, described Rosemary and her family as "part of the institutional memory of IBM Ring 12." He said she always "demands excellence," that she knows all the members and their children, and that she is what every organization needs to keep thriving:

In that way, Rosemary sees herself less as a magician than as an organizational supporter of the ring. She grew up watching great magicians at work, and saw their willingness to volunteer time to entertain children or visit hospitals.

As she learned more about magic, as she came to understand how magicians do what they do, her appreciation gradually shifted from wonder at the seemingly impossible to gratitude for their discipline and knowledge.

Asked about memorable magicians at work today in Western New York, Rosemary replied that Buffalo remains a national hotbed for the craft. Within the ring, she said Jake Weiland is known for a stunning vanishing bird routine, and she spoke of how Jimmy C is famous for “a beautiful floating table and a color-changing rose.”

There is Victor Trabucco, “one of the world greats at card magic,” and Tony Weiland, a guy who mixes comedy with magic, and Mike Kugel, who has a memorable zombie routine. There are Canadian members of great skill, such as Ken McCreedy, who has helped build large-stage illusions with famous magicians around the world.

And Rosemary said you have to see Todd and Teresa Nelson’s take on Harry Houdini’s “metamorphosis” to fully appreciate what they do.

She would have kept going, worried about leaving someone out, until I had to tell her gently that I only had so much room.

The point, again, that she finds most important: Buffalo, she said, "has some of the finest magicians in the world."

Already, her thoughts had moved toward others, far beyond her own illness. She choked up as she remembered how her father, a few weeks shy of 91, was talking about a new illusion on the night before his death, and she described how shortly after meeting her soon-to-be husband – a blind date set up by some teacher friends from school – he totally embraced a magician’s life.

Rosemary looked at the props spread across the table – a plastic skull, a wooden box, a floating rose – and she spoke with with passion of all the people who are rallying around her: Her family. Her fellow parishioners, from St. Lawrence Catholic Church in Buffalo. Her pinochle club. Her longtime colleagues. Even the brother and sister team who show up to maintain her pool.

And always, of course, the men and women of the ring.

In that sense, sitting in her house last week in a pumpkin costume, Rosemary described how suffering – a reality for her, but a word she does not use – has led to the greatest revelation of them all: The most startling of marvels, of wonders in thin air, becomes the gifts these people bring to her each day.

That is no illusion, though feel free to call it magic.