“Everybody was in the pool,” Orchard Park coach Bret Norvilitis said.

Led by Mackenzie Fischer, who won the 100-yard breaststroke (1:07.23) and swam on two winning relay teams, the Quakers had at least four swimmers compete in seven of the eight individual swimming events, and had at least three swimmers place in the top eight in seven individual swimming events. The Quakers also won three relays (200 medley, 200 freestyle and 400 freestyle), wins that are each worth 40 points.

“Some teams have girls where, one gets first and one gets second,” Fischer said. “But when you consistently have more than one girl in the top four, you’re going to come out on top.”

Norvilitis saw a difference in this year’s championship team.

“This has been the dream season, in my opinion,” Norvilitis said. “Because we’re still really good, but everybody has gotten along and they’ve supported each other so much as a team. This year, to see that kind of family chemistry, and we’ve got a bunch of girls here who didn’t qualify for anything and they haven’t swam for us and they’re still here, and still cheering. I think that’s what makes this so nice. It’s like family.”

“All the girls who graduated from last year, everybody was really close,” Fischer said. “They led us with a good example of how a team should be in leading the younger kids, so the older kids last year and this year really stepped up to take that on.”

Class B: Liz Dallas noticed something as her Starpoint teammates took off their warmup gear.

Starpoint’s swimmers had her name scrawled in black Magic marker on their right arms, just below the shoulder, in honor of the junior who could not swim for Starpoint because of complications of surgery on her right foot. Then, Starpoint won the Section VI Class B championship.

“This means the world,” said Dallas, who swims the freestyle and on two relay teams. “Walking in and seeing them do that for me, it got me tearing up. It was my best interests not to swim today, though. I pushed myself as much as I could but I just couldn’t do this today. But I knew that my team could do this.”

“Our depth was our number-one thing,” Spartans coach Marc Toth said. “We have a few standout swimmers, but everybody else in the bottom ranks, they always work hard and they know what they need to do for their team.”

Starpoint had 13 individuals or relay teams place in the top eight of the championship finals in all 11 swimming events Friday, including Allie Bashor, who won the 200 individual medley (2:10.96) and the 100 butterfly (58.47). Bashor teamed with Ashleigh Cottrell, Julia Maslanka and Allison Smith to help Starpoint win the 400 freestyle relay (3:43.28) by more than six seconds ahead of Lewiston-Porter (3:49.83).

The Spartans also had 13 swimmers finish in the consolation finals of 11 events, which garnered valuable points.

“Even the people who finish 16th, 15th or 10th, those are the points that add up and let us be able to win these meets,” Bashor said. “Depth is really important.”

Dallas stood on the pool deck with her teammates during each of the 12 races, and posed for photos with the team after they were awarded the championship plaque.

“We all look up to her so much, and she’s been through everything,” said Cottrell, who was fifth in the 50-yard freestyle and fourth in the 100 freestyle. “It’s really inspiring to see what she’s been able to do, but it’s unfortunate that she’s having medical issues now. We wanted to be there for her and show that we’re doing this for her, and that she is still swimming with us, even though she can’t right now.”

Class C: A miscue by Southwestern’s 200-yard freestyle relay team set up Frewsburg to win the Class C championship. The Bears won the title with 415 points, ahead of Southwestern (379) and Eden (265).

Southwestern led the 14-team field with 261 points after the 500-yard freestyle, ahead of Frewsburg.

But Southwestern’s 200 freestyle relay team was disqualified after one of its swimmers left the starting blocks too early. Southwestern would have finished third in the race, which would have garnered 32 points.

“The relays are an awful lot of points and to lose those to disqualifications, that hurts,” Frewsburg coach Bruce Johnson said. “It definitely gave us the momentum we needed, and we knew we were coming into our strongest events, the backstroke and the breaststroke.

“But we stressed to our kids all the past week that the preliminaries are huge. You have to swim fast there, because only the top 16 come back. Of the 20 girls who qualified for this meet, 16 came back for the finals.”

Even more remarkable was that Frewsburg won only one event – Madison Kramer won the 100 backstroke in 59.09 – but had at least two swimmers with top-eight finishes in seven individual events.

While Southwestern won the 400 freestyle relay, the final race of the meet, Frewsburg had seven swimmers place in the final two individual events, the 100-yard backstroke and the 100-yard breaststroke, which widened the gap between the two teams. 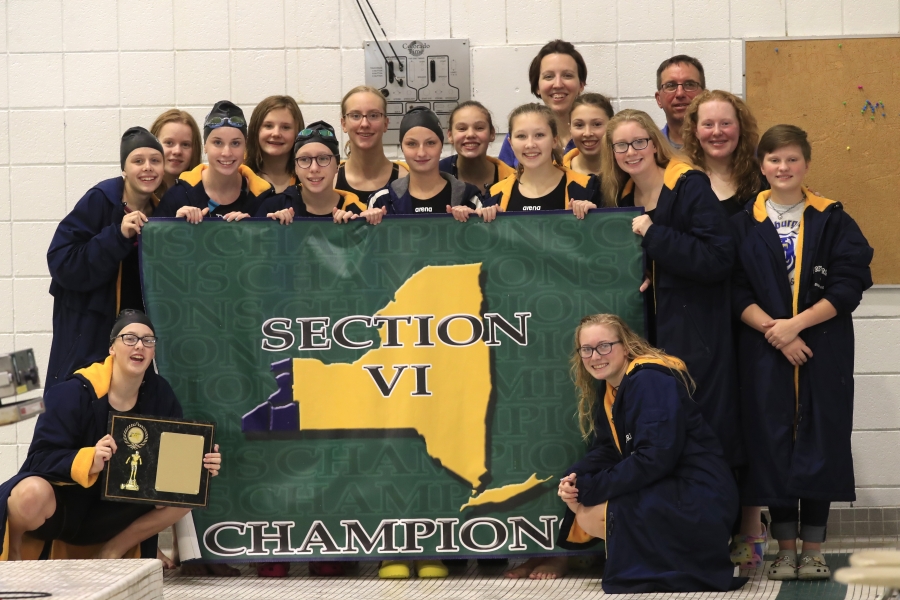