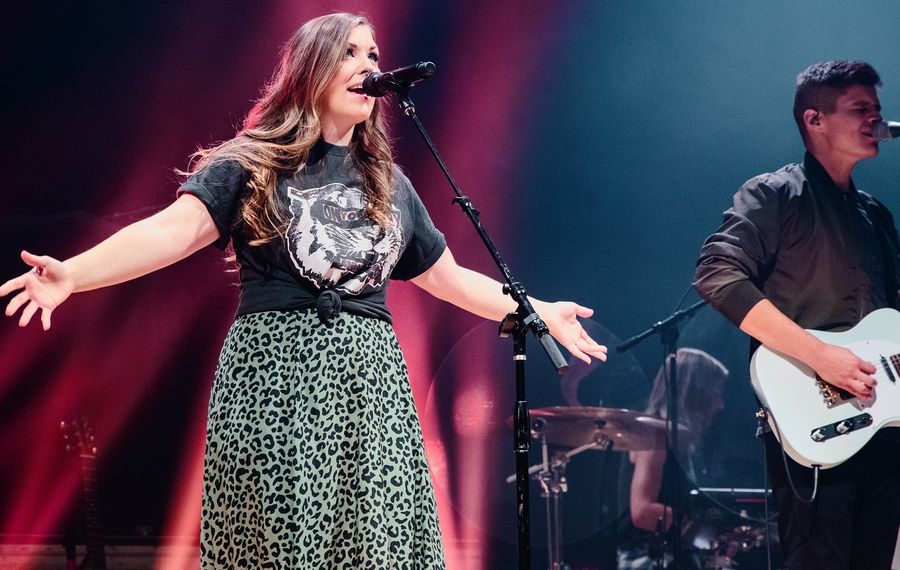 GRAND RAPIDS, Mich. — A dozen young women formed a loose line in front of Hannah Kerr’s merchandise stand. Some were flanked by their families. Some lingered alone. The show Kerr performed here at Cornerstone University, a small Christian college, had just ended. It was about 9:45 p.m., and many of these fans were hoping for more than a T-shirt or bracelet.

They wanted to talk with Kerr. This happens after almost every show. “Sometimes I’m in the lobby until midnight,” the 22-year-old Christian singer said. “It just depends on the night. Tonight I could be done by 10. You never know.”

This scene is likely to repeat when Kerr performs Nov. 10 at Eastern Hills Church in Williamsville. That show, which is headlined by Christian pop-rock singer Jordan Feliz and also features the band I Am They, will be a homecoming of sorts: Kerr spent the first two-thirds of her life living in Orchard Park. But right around the time Kerr was to begin high school, her aunt – who is Kim Pegula, co-owner of the Buffalo Bills and Sabres – asked Hannah’s father, Gordon Kerr, to consider moving to Nashville to run the Pegulas’ record label, Black River Entertainment.

That offer required deep reflection, consideration and prayer. The Kerrs had a full life in the Southtowns: Gordon was a school administrator in Hamburg. He and his wife, Kimberly, were worship leaders at Wesleyan Church of Hamburg (now called Watermark Wesleyan Church).

“It was such a happy childhood,” said Hannah, who learned French horn and piano from her grandfather, singing from her mother, and guitar from her father. “I thought my parents were rock stars, seeing them up there on Sundays.”

Hannah was sometimes up there, too. Her earliest singing memory – and one of the first memories of her life – was performing “Silent Night,” at her dad’s request, for a Christmas program. She was 5. “I remember not being nervous at all,” she said. “I was like, ‘This is what my dad asked me to do, and I’m doing it.’ From then on, I was excited to have any opportunity to lead worship or be involved in what my parents were doing.”

When Hannah was in middle school, her older brother Josh became youth worship leader and asked her to be a singer. Her middle brother Michael joined, too. Singing was Hannah’s greatest passion. “Any instrument I played,” she said, “I really was just playing so I could sing to accompany myself.”

Life in the Southtowns was comfortable for Hannah.

When Gordon Kerr decided to accept the offer to run Black River, which is owned by his sister Kim Pegula and her husband, Terry, it uprooted that comfort. The entire Kerr family, including Hannah and her two older brothers, relocated to Tennessee. While the move was clearly a career opportunity for Gordon, nobody involved suspected it would be for Hannah as well.

“The whole family is musically gifted, but I didn’t know at a young age that she would make this a career,” Kim Pegula told The News in an email. “But obviously I’m very proud of her.” 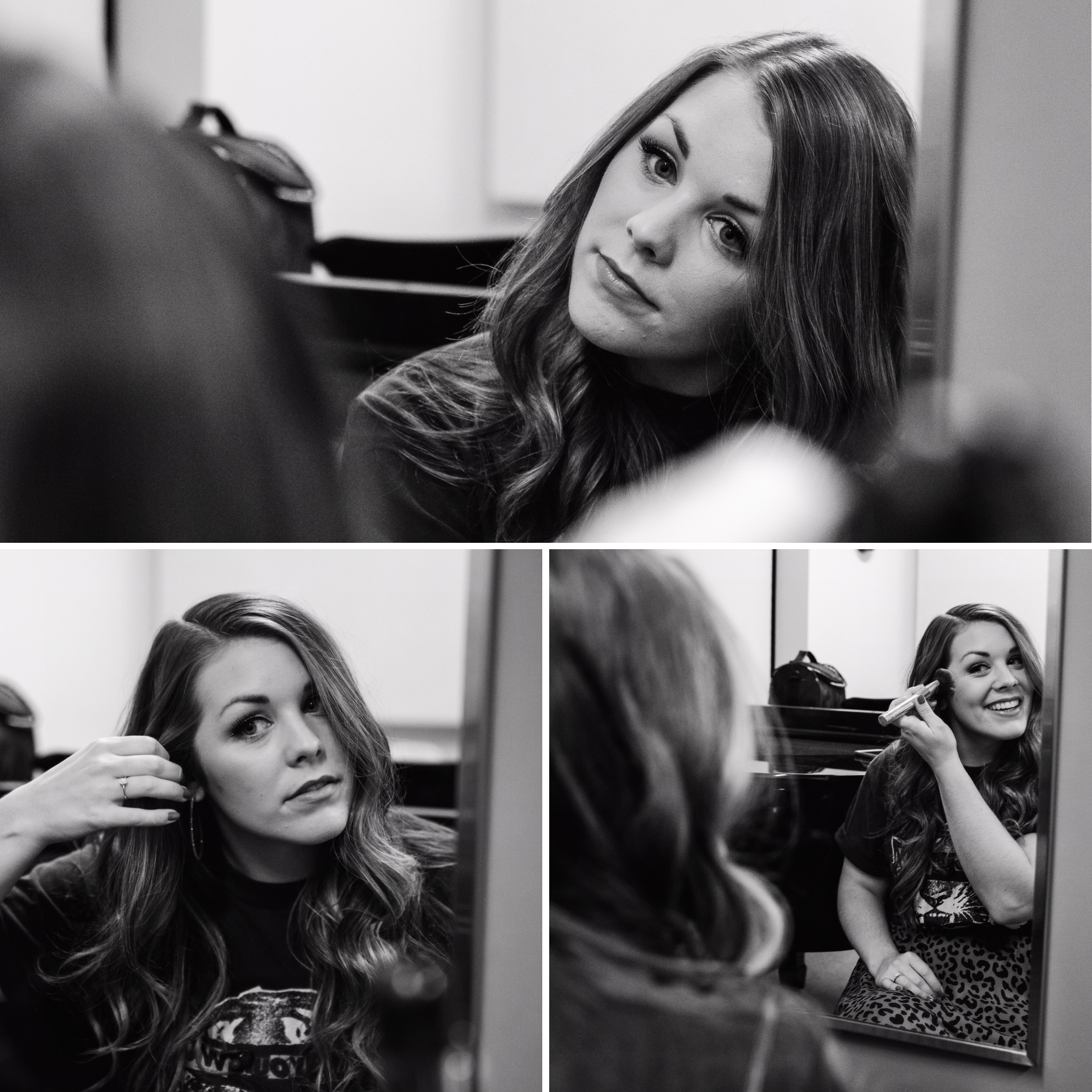 Kerr, shown here before taking the stage in Grand Rapids, Mich., listens to worship music and allows allows herself a few quiet minutes as she does her makeup. “Getting ready for the show is when my mind shifts into ‘focus mode,’” she said. (Photos by Jordan Lavagnino, courtesy of Black River Entertainment)

The magnitude of the move struck Hannah only once she settled into Nashville. “I was sad, for sure, to leave my friends,” she said. “Buffalo was all I knew. … We got to Nashville and I realized, ‘Oh, this is a huge deal. I have no friends. I have no family, except my parents.’ I didn’t really realize how big a deal it was.”

Kerr worked her way through the new-kid-in-town adjustment and found community in a local church music group. She began writing music, too, dipping into pages from her journal and transforming words and emotions into song with the help of her brother Josh, who today is a noted Nashville songwriter. But it was a different type of “big deal” that would transform her life and open an entirely new career pathway for Hannah, who had long planned on becoming a teacher.

One day about six years ago, Gordon Kerr was playing music for Mark Miller, a veteran Nashville producer who is also the frontman of the band Sawyer Brown. The main purpose of the meeting was for Miller to hear the work of a then-new country singer named Kelsea Ballerini, who today is a well-known, Grammy-nominated artist and one of Black River’s greatest success stories. As Kerr clicked through songs on his computer, one of Hannah’s compositions came up, too. He played some of the song, without revealing the artist.

Kerr didn’t reveal the name; he mostly wanted to see what Miller thought of the song and didn’t want to influence his reaction. “Oh, just listen,” said Kerr, who played some more of the song. He remembers Miller turning around and rolling up a sleeve to reveal goosebumps. “Whoever that is,” Miller said, “I’m in.”

Of course, Hannah Kerr had to buy into the idea of becoming a recording artist, and that wasn’t an easy sell. Though her music has a pop feel, she harbored no desire to become a pop artist. Only when she was assured that working in the Christian music realm would give her a chance to help people – to have a ministry – did she agree to do it. “I took the leap hesitantly,” she said.

The early days worked out well: Kerr’s first two singles in 2015 and 2016 hit the Billboard Christian charts. In 2017, her song “Warrior,” which tells a story of faith and resilience, climbed to No. 20 on the Hot Christian Songs chart and remains popular today. 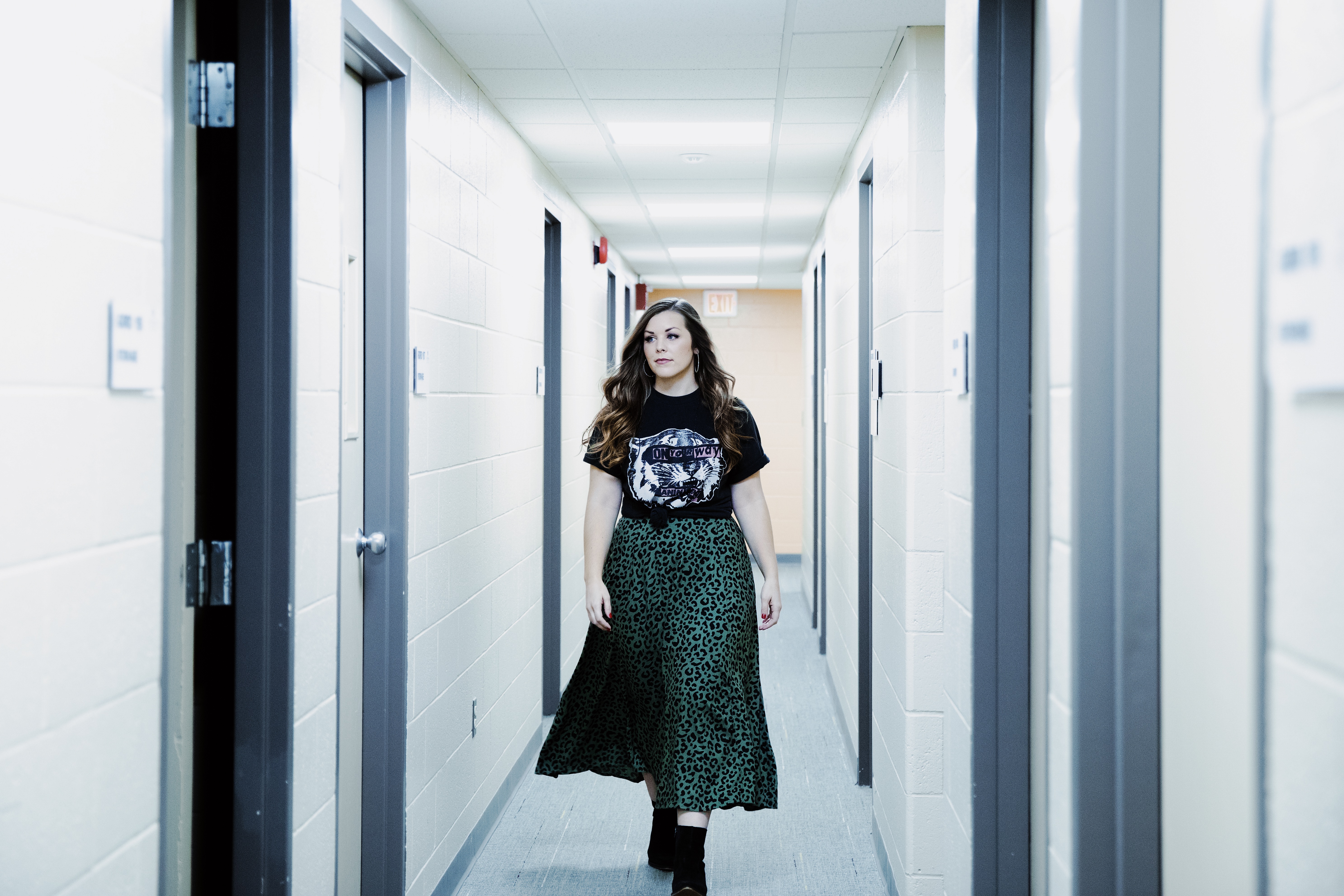 Hannah Kerr, moments before her performance in Michigan: “The walk to the stage is always filled with excitement and some nervous butterflies,” she said. “It's not lost on me that there are a lot of people out there, and this is a huge opportunity to minister to them!” (Photo by Jordan Lavagnino, courtesy of Black River Entertainment)

Staying off the road

As that commercial success was happening, Kerr was trying to balance a life of touring as a musician with being a full-time college student. It wasn’t working well. Midway through her college career, Kerr was experiencing what she describes as “health issues.”

She explained: “The doctors were like, ‘We have no idea what’s wrong with you. Everything’s wrong, but we just don’t know how to fix it, and you just have to wait it out. Maybe it’s because you’re stressed. Maybe there’s something else going on.’”

Kerr decided to spent most of the second half of her college career at home, staying off the road, sticking to Nashville and focusing on being a student at Belmont University.

“All of that at once was very hard, and kind of brought back that same feeling of when I first moved to Nashville of, ‘I’m lonely, I don’t have the friendships that I want, I feel lost, where am I going?’ ” she said. “Kind of that same season replicated in my time in college five years later. ...

“It’s kind of interesting, the cycle of life, like we keep meeting ourselves in the same seasons over and over again, and feeling still like a 13-year-old girl inside.”

As Kerr worked on herself while finishing her degree, she also dipped into that deep sense of introspectiveness to write music. Her new EP, “Listen More,” reflects those years of healing, strengthening, maturing and finding love: Her fiancé, Jason Earley, whom she met at Belmont, proposed to her last spring on the day of her graduation. Earley is traveling with Kerr and is her guitarist and tour manager, and they are getting married this spring.

One of the songs on the EP is “Glimpse,” which was written as a final project for a class at Belmont. Kerr describes it as exploring “love, mystery and knowledge and how that plays into our relationship with God.”

Today, she embraces all of those. 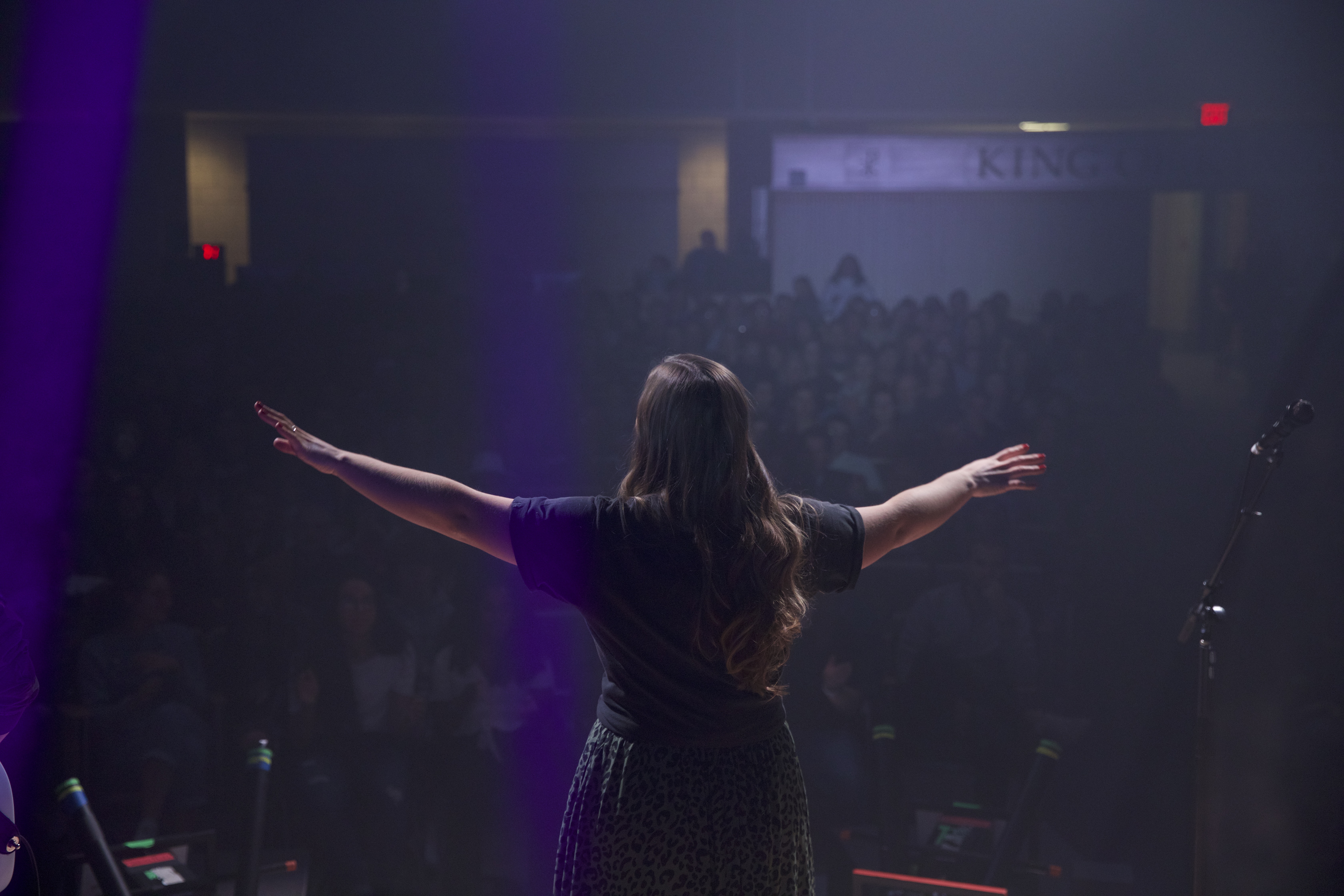 When Kerr steps onstage, she calls it “Go time.” She said, “I really try to put all of my emotions into my set each night. People can tell when someone is being real, and I want them to feel that I'm being authentic and true to myself through my songs.” (Photo by Jordan Lavagnino, courtesy of Black River Entertainment)

Kerr is healthier and stronger, though the source of her medical challenges in college remain a mystery. She is accepting of that. “We still didn’t know what was happening,” Kerr said. “But you can’t have it all together and have all the answers all the time. So I’m still living in that, and that’s OK.”

Kerr, who considers her performances not solely as entertainment, but also as ministry, alludes to this from the stage. She shares some of her story – though her set is just 20 minutes, so she is efficient with her words – and invites people in the audience to find her after the show and do the same. She’s intentional even in her fashion. Here in Michigan, she wore a long, flowing cheetah-print skirt and a dark T-shirt with the words “On Your Way” emblazoned over the image of a tiger. The imagery of the animal – strong and graceful – and the aspirational message were apropos for where Kerr stands in her career, and where she hopes her audience will be, too: always moving forward with faith. 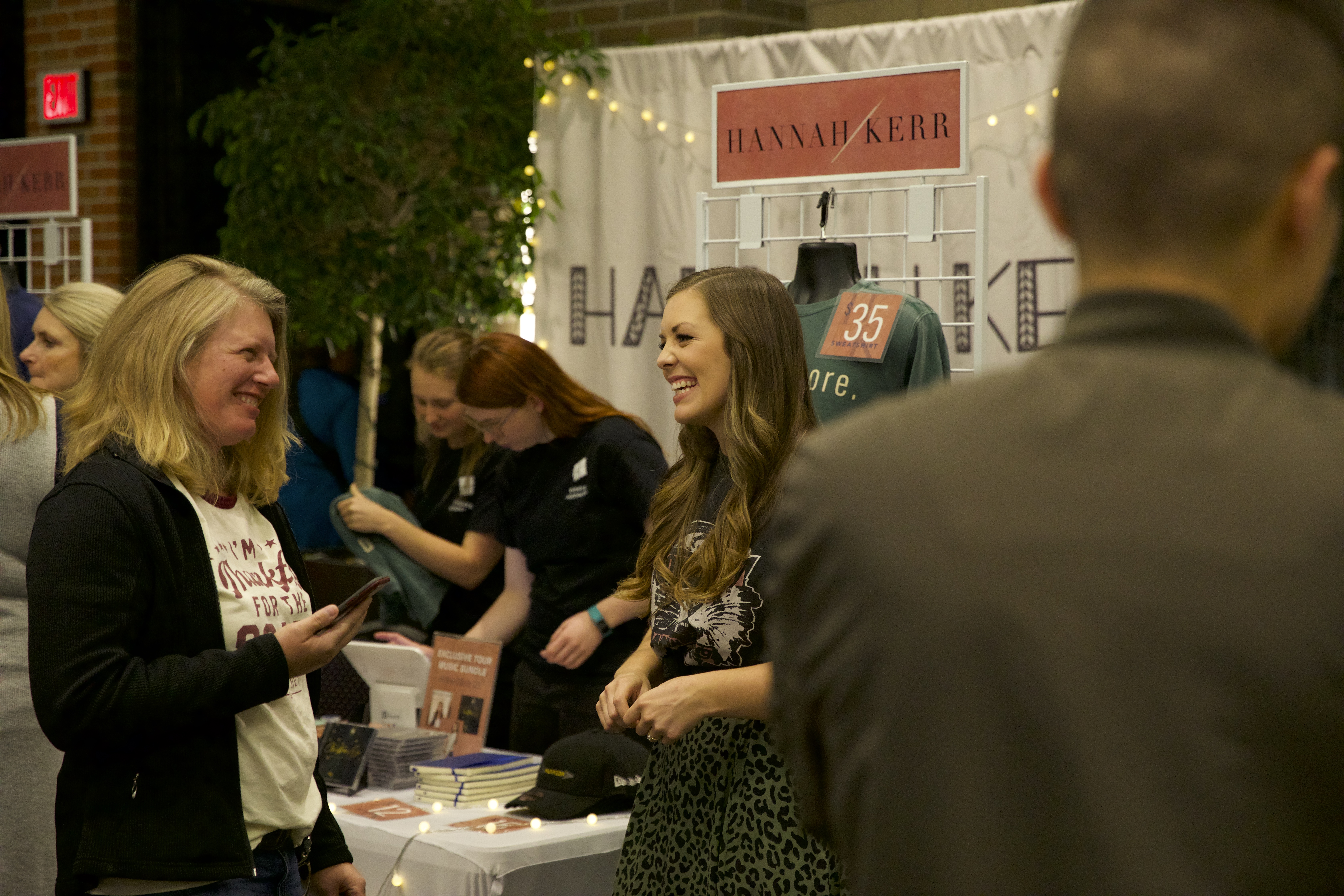 Kerr's favorite part of show nights is actually afterward, when she meets fans. They share stories, pray and take photos. "This is where so much of the ministry happens," she said, "and these moments put everything into perspective." (Photo by Jordan Lavagnino, courtesy of Black River Entertainment)

After the show, one of the girls in line confided to Kerr she had suffered a concussion and couldn’t dance for a long time. But she was doing better now, and said one of Kerr’s earliest songs “Warrior” was her favorite. She’s back to dance and chose “Warrior” as her competition piece.

Another spoke to Kerr quietly for about 10 minutes as an older fan noticed her fiance, Earley, standing nearby. Kerr had introduced him onstage with the band. “Congratulations on your engagement,” the fan said to Earley.

“Thank you,” Earley said, smiling sweetly and chatting for a moment as his soon-to-be wife kept talking, listening and posing for photos. The conversations kept on for another 20 minutes, one fan after another sharing a story that would be just between her and Kerr. The music was long over for the night, but the ministry kept going.