Move over, CBD, there's a new leaf in town – and this one is more controversial.

Buffalo just got its first retail store dedicated to the sale of kratom – a Southeast Asian plant that has been used for centuries as a painkiller, mood lifter and energy booster.

American consumers are increasingly using kratom for those same purported benefits, and it is rising in popularity as an alternative to addictive opiates, as well as a means to wean people away from opiate addictions without using synthetic substitutes such as methadone or suboxone.

Gabrielle Callea, a bank compliance officer from the Town of Tonawanda, has been using kratom for seven years to help with what she said was once "crippling" anxiety and depression.

"All I can tell you is it makes me feel better," Callea said. "I feel like a new person."

But critics, including the Food and Drug Administration, call kratom dangerous and addictive, and have sought to have it banned. They cite side effects ranging from increased heart rate and vomiting to seizure and overdose. The FDA has cracked down on companies making health claims about kratom, and instituted a mandatory recall of it in 2018 over salmonella concerns.

Kratom has been banned in six states. Legislation is pending in others to restrict or outlaw it. In 2016, the Drug Enforcement Administration announced plans to list kratom as a Schedule 1 controlled substance, but relented to public opposition. The DEA now lists kratom as a "Drug of Concern." A 2017 bill to ban kratom in New York died in committee.

"Kratom should not be used to treat medical conditions, nor should it be used as an alternative to prescription opioids," said FDA Commissioner Dr. Scott Gottlieb in a statement. "There is no evidence to indicate that kratom is safe or effective for any medical use."

Until now, Kratom (pronounced KRAY-tm, rhyming with "verbatim,") in Buffalo has been sold in head shops alongside marijuana pipes and other drug paraphernalia, since some users abuse it to induce euphoria. That has lead to a stigma the Kratom Shop hopes to bust.

A sign on the counter of the Elmwood Avenue shop reads: "If you're looking to get high, you're in the wrong store." 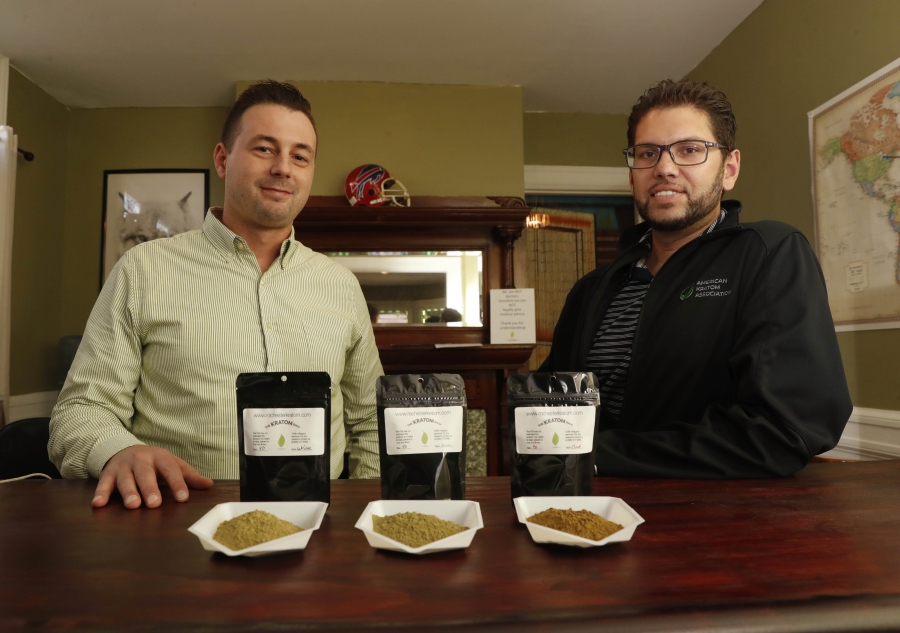 In fact, co-owner Dan Chianfoni, an accountant by day, insists his mission is to get people off drugs.

Chianfoni's introduction to kratom came seven years ago when he watched his brother, an opiate addict, use it to wean himself off drugs. Kratom works on the body's opiate receptors, and is increasingly being used to ease pain in place of prescription opiates, or to transition out of opiate addiction. (His brother has been clean for seven years, Chianfoni said.)

"We're not another vape shop trying to get your kids hooked on bubble gum-flavored nicotine," said Matt McNeil, a former pharmaceutical rep and co-owner of the Kratom Shop.

Chianfoni opened his first kratom store in Rochester in 2017, another in Brockport last year, and set up shop at 1007 Elmwood Ave. in September. Co-owner McNeil puts the bitter-tasting kratom in his coffee every morning.

Chianfoni, who had a heart transplant four years ago, uses kratom as needed to combat anxiety. Prices at the Kratom Shop range from 25 cents to 50 cents per gram, which is the average starting dose. Kratom takes 20 to 40 minutes to take effect and lasts an average of three to five hours.

But critics say there is no scientific evidence that kratom works. And they say kratom use can, in fact, be dangerous. There are reports of it causing seizures or death when mixed with other substances, worsening depression, causing psychosis and delusions. It has also been linked with liver damage and a host of scary side effects.

The FDA has declared kratom to be an opioid and has documented 44 cases where the substance was associated with the death of a user, often young, healthy people.

"As the scientific data and adverse event reports have clearly revealed, compounds in kratom make it so it isn't just a plant – it's an opioid," Gottlieb wrote. "There are also safer, non-opioid options to treat pain."

Kratom advocates, however, dismiss those concerns.

One of the Kratom Shop's customers is Mark Jamieson, a Native American healer from the Six Nations in Canada who now lives on Grand Island. He recently added kratom to his roster of natural remedies, such as dandelion, burdock and valerian root.

"A mother came to me and she begged me for something to help her son get away from the drugs he was doing, the opiates," Jamieson said. "He was taking money from her purse and stealing stuff from her to sell and go buy pills. It was really devastating to hear."

The 26-year-old had been taking "enough Lortab to kill a horse, three times a day," Jamieson said. Jamieson began bringing the man a jar of kratom tea every morning, and almost immediately, "he wanted nothing to do with the pills," Jamieson said.

"His mom called me and said, 'I can't believe it. You're sent from heaven above,' " he said. "I said no, it's not me. I'm a healer, a healer's helper really. Creator is the healer."

He said the man has "a little bit of a road to go," but he said the kratom – along with the man's resolve to quit opiates – has changed the man's life.

"As far as kratom goes, I believe in it. I believe it works. I believe it’s there to help us," Jamieson said. "It's the people who don't know what it is who say negative things about it." 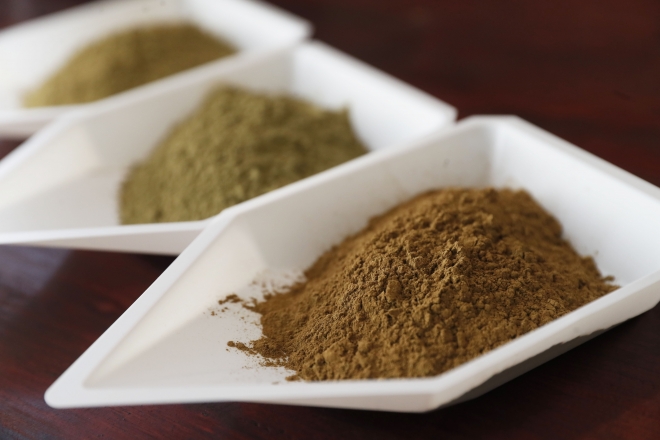 When Callea first experimented with kratom, she mistakenly took three times her current dose and ended up feeling queasy. Other than that, she has never experienced negative side effects, she said.

And though she tries to make sure she takes it regularly, she has gone long periods without it. While people she knows have reported feeling withdrawal symptoms similar to caffeine withdrawal, she has never experienced it, she said. When she told her doctor about her kratom use he "wasn't thrilled" about it, but he wasn't overly concerned, she said.

"I think it’s very important for people to remember that kratom is used for a lot of things besides addiction," Callea said. "I don't judge anybody, but there are many of us that have never struggled with addiction and we’re not looking to get high or anything like that. We’re just regular people drinking a tea and I think it’s our right to do that."

Like Jamieson's and Callea's experiences, most evidence about the purported benefits of kratom is anecdotal. Much like with CBD, there is a lack of kratom-specific research.

In September, the FDA warned consumers not to use kratom, saying it had received "concerning reports" about its safety.

"FDA is concerned that kratom, which affects the same opioid brain receptors as morphine, appears to have properties that expose users to the risks of addiction, abuse, and dependence," the FDA wrote in a public health bulletin.

The AKA, as well as the owners of the Kratom Shop, call for mandated oversight, regulation and quality control that they say would prevent unscrupulous vendors from mixing kratom with harmful ingredients, and make sure the kratom on the market is free from things such as toxic pesticides and heavy metals. The Kratom Shop's product is tested in a third-party lab.

The journal Clinical Toxicology noted 11 deaths between 2011 and 2017 where kratom was a contributing factor. All but two involved other drugs such as cocaine, fentanyl and alcohol. In contrast, there have been 34 known deaths attributed to high-caffeine energy drinks, according to the FDA. In 2017 alone, there were about 49,000 opioid deaths, according to the Centers for Disease Control and Prevention.

Dr. Praveen Chandrasekharan, an assistant professor of pediatrics at the University at Buffalo's Jacobs School of Medicine and Biomedical Sciences, authored a case report involving a baby born in Buffalo who exhibited signs associated with opiate withdrawal after exposure to maternal kratom use during pregnancy. The mother involved also used Gabapentin for fibromyalgia and was a chronic smoker, but Chandrasekharan found that the signs of withdrawal the baby showed didn't match the ones linked to those other substances.

When asked if he believes kratom is safe, he said, "I frankly do not know."

"I can only tell you that kratom needs more research to know its safety profile," Chandrasekharan said.