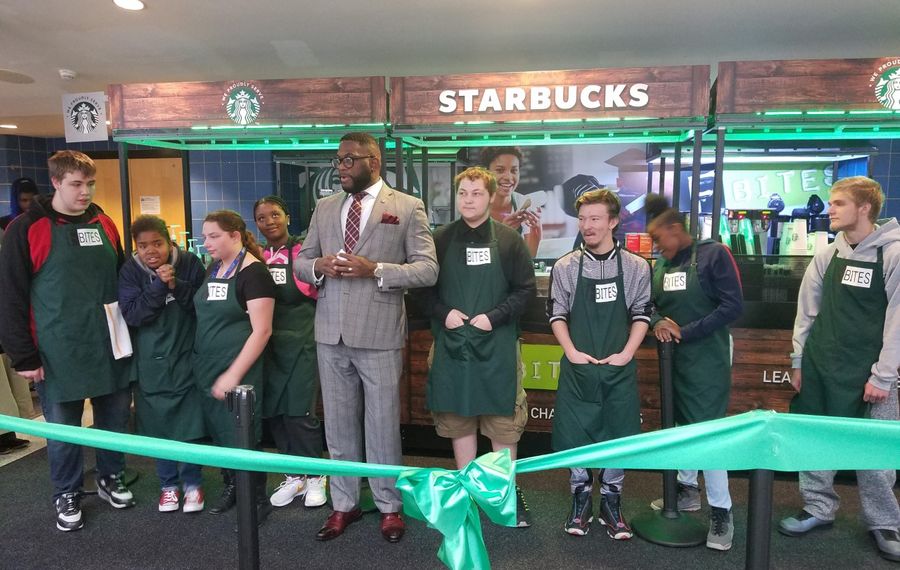 Last year, it was all Niagara Falls High School special education teacher Ricco Slaiman could do to get Hunter Andrzejewski to come to class.

Now, the 10th grader manages a Starbucks – and he didn't have to leave school to do it.

That's because Niagara Falls High is now home to the nation's first in-school Starbucks, and it's entirely student-run.

"Learning how to work in a business setting helps get you ready for doing it in the real world," Hunter said.

The ribbon was cut Friday on the coffee counter in the lobby of the school amphitheater.

It was the idea of a celebrity chef who wanted to help students at his alma mater learn job skills.

Forty students a year will work at the coffee counter, with a new group of 10 rotating in about every six weeks, according to chef Bobby Anderson, a Niagara Falls native and onetime contestant on the TV cooking show "Hell's Kitchen."

He founded F BITES, a nonprofit culinary education program that offers courses at the school.

"He had this idea, and we said, 'Let's do it,' " Superintendent Mark R. Laurrie said.

Because of federal regulations regarding the nutritional content of school food, students are barred from buying anything at the Starbucks during school hours, Laurrie said.

At present, the menu includes only coffee drinks. Laurrie said Starbucks' sweet items might be added later, depending on the success of the business, but students still won't be allowed to buy them.

The Starbucks will be open for teachers and administrators to patronize from 7:15 to 8:45 a.m., said Jamie Evan, executive director of F BITES.

It will serve as a concession stand at evening plays and concerts. Anderson said proceeds will be split between the district and reinvesting in the business.

D'Anna Elder, another 10th grader, said she has learned about "working hard, being a team player, working hard with other people to help them when they need help."

Anderson said the F BITES students earn safe-serve and barista certificates which will help them find work in the food service industry.

Sharon Belton-Cottman, president of the Buffalo Board of Education, has discussed with Anderson whether his program could come to Buffalo Public Schools.

"That's why I'm here, to see if we can mimic, because we don't believe in reinventing the wheel when it's already been done with perfection," Belton-Cottman said.