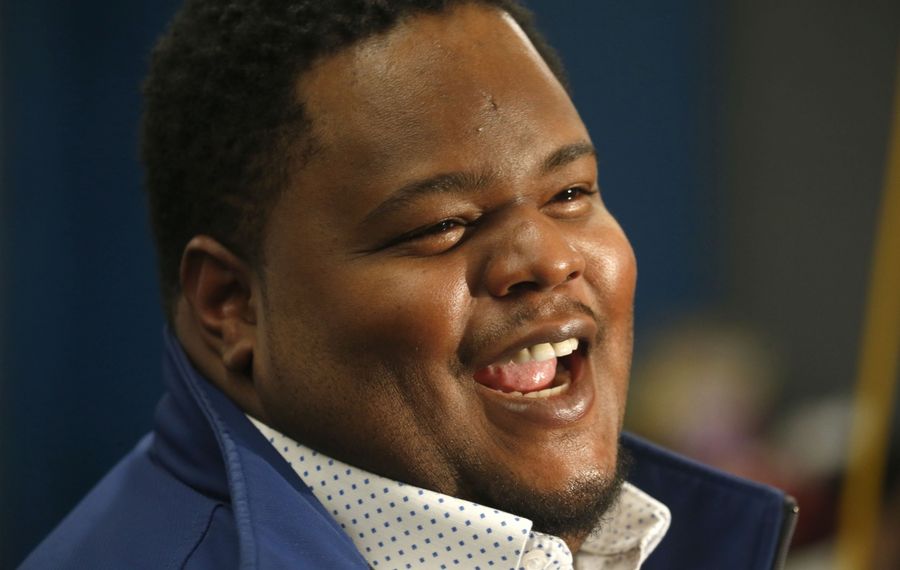 SparkCharge has signed a lease for space on the East Side.

Kickfurther has made local connections, including with an M&T Bank executive.

All three companies won prize money in last year's edition of the 43North business plan competition. As a newly minted class of winners prepares to move to Buffalo, some past prize winners credit 43North with helping them get acclimated and grow.

43North organizers and supporters hope these companies will stick with Buffalo beyond their one-year requirement, add jobs and bolster a startup community that had been lagging. The decision is ultimately up to the companies, but 43North aims to make Buffalo a viable long-term option, by supporting them with resources and helping them make business connections.

In essence, the $4.5 million handed out this year in the competition, which was created as part of Gov. Andrew Cuomo's Buffalo Billion, is a starting point in that process.

After six years of competition, 43North's breakout star is ACV Auctions. The homegrown tech company won the top prize in 2015 and now has 1,000 employees nationwide, including 400 here. A recent Reuters report said ACV intends to raise $150 million in a new funding round, which would make it Buffalo's first "unicorn" – a privately held startup with a market value of more than $1 billion.

Of course, prize money from 43North is no guarantee a company will succeed or stick around.

One of the 2018 prize winners, NaturAll Club, elected against moving to Buffalo, and thus didn't collect its $500,000 prize. Others have departed after their one-year obligation was up.

ASi, the original $1 million winner in 2014, wasn't able to build on its initial promise and its business, based around a machine its founders thought could punch out small parts quickly and cheaply, crumbled. Last year, ASi was declared delinquent on a $250,000 loan it had received from the Erie County Industrial Development Agency's loan arm.

43North says more than half – 23 of the 44 – portfolio companies from the first five years of competition still have a presence here, and that its award-winning companies have created more than 600 jobs in the region.

Since the third year of competition, 43North has refined its mentorship program and has targeted potential applicants that were further along in their development, with good alignment to Buffalo's talent, customers, investors and other resources, said Peter Burakowski, a 43North spokesman.

Since those adjustments, 43North has retained about three quarters of its prize winners, he said.

SparkCharge, which came from Syracuse, won the $1 million grand prize last year with its pitch for making portable charging stations for electric vehicles. The company has signed a three-year lease for space at the Northland manufacturing hub on the East Side.

SparkCharge's CEO, Joshua Aviv, said 43North has been supportive over the past year. "We've got a lot of mentorship. We've got a lot of guidance. They were really helpful in helping us grow our business," he said.

Carrying the title of 43North grand prize winner "helps get the foot in the door" with potential investors, Aviv said. "It was definitely something that allows you to kind of be validated: 'Hey, this is a great idea, this is something that has some merit behind it.' "

HiOperator, which provides customer service to its clients, was one of seven $500,000 prize winners last year. Elizabeth Tsai, the CEO, said 43North has helped her recruit employees since she relocated the San Francisco-born business here. 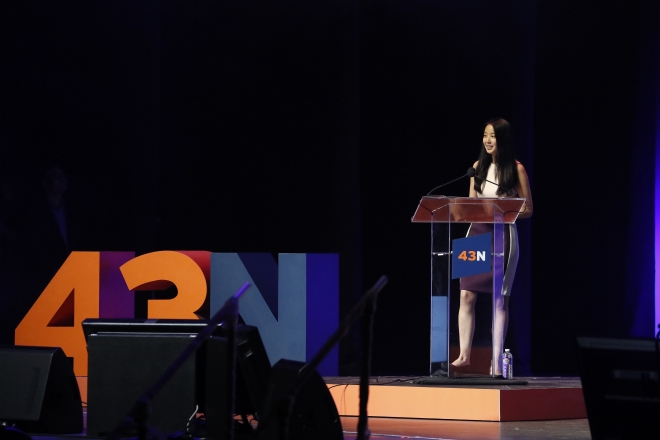 "I don't think we could have grown and hired and scaled faster anywhere else, partly because of Buffalo being what it is, but also because of 43North," Tsai said. "They have really been partners."

Tsai declined to disclose HiOperator's employee total. "We've hired over 30 people in the last couple of months, and we are on track to hire to another 15 to 20 before the end of the year," she said.

Kickfurther, another $500,000 winner, enables businesses to crowdfund to raise money to manufacture their inventory. Sean De Clercq, the CEO, moved the business here from Boulder, Colo. Today, seven of its employees are based here, and three are in Boulder.

De Clercq meets monthly with his company's lead mentor, Michael Wisler, who is chief information officer at M&T Bank. De Clerq cited that as an example of the doors 43North has opened up to him. "You can't really pay for access like that," he said.

De Clercq and other CEOs from the 2018 award winners get together monthly for sessions that he quips are "half strategy, half therapy." They share ideas and contacts with each other. 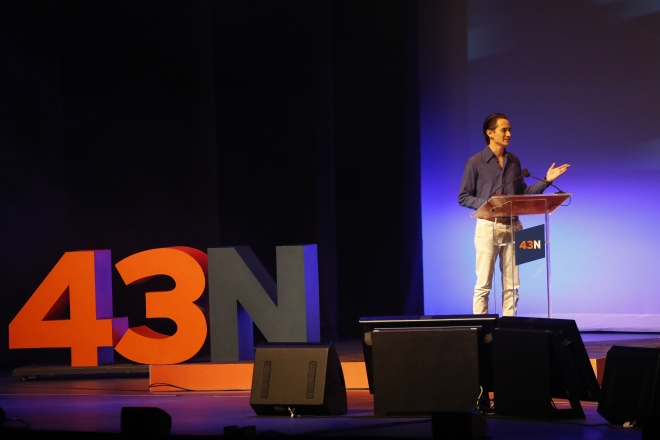 The New Jersey native didn't know much about Buffalo before moving here. But he said he has felt welcomed, experiencing "little unexpected elements of kindness all around," including from people he meets on the street. "I think Buffalo in all walks of life has really lived up to that City of Good Neighbors name," De Clercq said.

Only one of the eight prize winners from this year's class, Circuit Clinical, is from Buffalo. The challenge becomes to persuade the other seven, including champion Strayos, that Buffalo is such a good fit, they will stay for more than a year. (43North takes a 5% equity stake in each of the prize winners.)

The awards night has grown into an annual October draw at Shea's, packing the theater. Investors attend 43North Week from around the country, to serve as event judges and meet with area startups. 43North hopes the investors will develop a sense of Buffalo, get exposed to opportunities, and share their impressions within their own network.

Marissa Campise, who served as a 43North finals judge, raved about what she saw during her visit to Buffalo. She is founder of the venture firm Rucker Park.

Campise noticed the loud cheers hometown favorite Circuit Clinical received when its CEO took the stage. She took that as a positive sign of local interest in the startup community.

"I had no idea this was happening in Buffalo, so I think a lot more investment dollars are going to come from investors," Campise said. "Because innovation and the markets where there's lots of technology investing happening, they're so overpriced, they're so crowded, and it's all about finding opportunity elsewhere. So Buffalo has a real shot to be like the next big ecosystem."