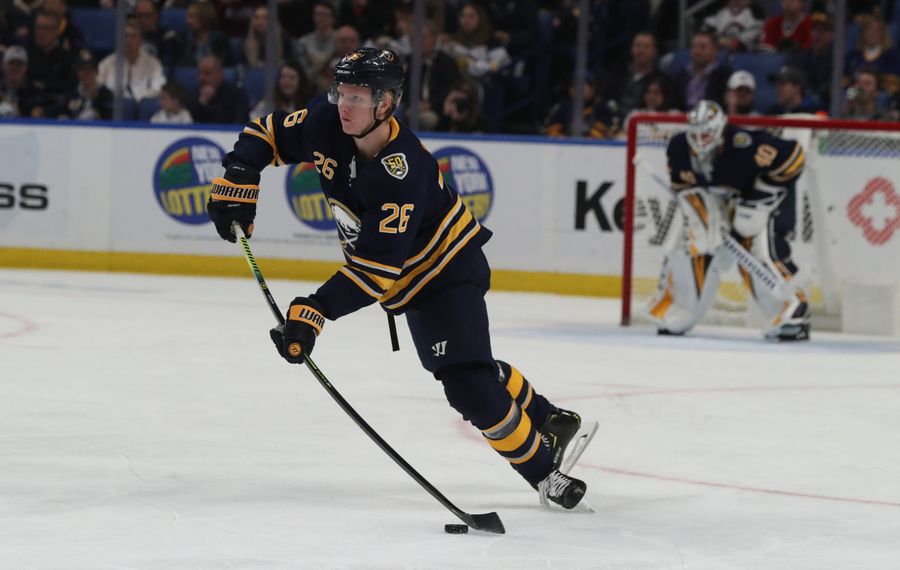 Ralph Krueger's reaction Monday night — "Ya-hoo!" — said it all when he brought up the fact he was going to get two whole practice days before the Buffalo Sabres' next game, a veritable luxury the team hasn't had before any of their games in October.

So it was a bit of a mini-Camp Krueger on Wednesday in KeyBank Center. Nary a word was mentioned of the Washington Capitals, Friday's opponent in Capital One Arena. This was all about his team.

The Sabres had Tuesday off, and the coach and his staff spent Wednesday morning chatting both pro and con about the club's 9-2-2 record.

Then it was time to hit the ice. And it looked a lot like September.

Passing. Skating. Pylons. No wasted energy. One drill to the next. It's never a bad time to refresh your skills and have a little training camp during the season.

"The free day allowed us to spend a lot of time thinking — which is dangerous in a coaches' room," Krueger joked after the 75-minute workout. "But we had a wonderful discussion this morning, and in practice today we definitely went back to some fundamentals and just put them through a day of on and off ice that went a little bit deeper into the physicality."

The Sabres played their first 13 games in 26 days, a compressed schedule necessitated by the travel time required to and from next week's two-game series in Stockholm, Sweden, against the Tampa Bay Lightning.

"Finally, some practice," said defenseman Rasmus Dahlin. "You can work on your stuff and not only on focusing on your body. You can focus to get better and practice hard. Recovery has not been super easy. You have focus on really taking care of your body, what you eat and how much you sleep. It's a grind that you have to work through it."

No major changes were unveiled in practice among the forwards, as the lines stayed the same as they've been most of the month. On defense, Brandon Montour took a regular spot alongside Dahlin and seems to be targeting his season debut for Friday night's game after being out more than a month with a hand injury suffered in the second preseason game at Columbus.

Krueger & Co. resisted the urge to do any tinkering. While he acknowledged he doesn't want to fix what isn't broken, the Sabres need to tighten up defensively. They've allowed 85 shots on goal in the last two games, including 44 in Monday's shootout loss to Arizona that saw Buffalo fritter away a 2-0 first-period lead.

"More than anything, it's improving what's happened," Krueger said. "I thought we got a little bit softer in our defensive game after the quick lead against Arizona. We went a little bit loose. ... We kind of drifted. We're not reinventing anything new anymore. We're just trying to stick with our plan right through 60 minutes."

Krueger said it's "definitely doubtful" that Montour would play both games this weekend, as the Sabres have a quick turnaround after Washington to host the New York Islanders here Saturday night.

"The first little bit here is going to be an adjustment," Montour said. "Skating by yourself is a little bit different than playing in a hockey game. That's just an adjustment I've got to work towards. If I play one, if I play both, it's up to these guys and we go from there."

"Today is the first practice he started to feel comfortable with all the traffic out there," Krueger said. "He's been doing a lot of solo figure skating. Skating, skating, skating with nobody else on the ice. You add all those other bodies and suddenly it becomes a different world."

The Sabres, of course, will be entering a different world when they leave Sunday for Sweden and Krueger acknowledged the team had a short planning meeting about the trip Wednesday. Dahlin, like fellow Swedes Linus Ullmark, Johan Larsson and Marcus Johansson, said his family has been dealing with a lot of ticket requests and chatter about the trip, so it's a battle to stay focused on the upcoming schedule.

What was Krueger's message to the team after finishing his chat about the trip?

"Now park it. Boom. Until Sunday," the coach said. "With sport science, we're looking at the processes of time change and so forth trying to nail that all correctly, but it's already parked. We need to be bang-on with the opponents coming at us. Very experienced teams. Strong through last season, playoff contenders, and teams we really can measure ourselves against.

"I think it will be quite easy when we get on the airplane on Thursday to shut all other distractions out when you know a team as strong as Washington is waiting for you in their own building."