Strayos will move its headquarters to Buffalo from St. Louis, Mo.

The business was likened to Google Maps for below the surface – using technology and imagery to create safer work sites where drilling or blasting is involved.

The founder, Ravi Sahu, said his company will apply the $1 million prize toward hiring more people, including geoscience engineers, to scale up sales and marketing and accelerate the company's growth around the country.

The company will relocate most of its eight employees here, and plans to hire 12 more people, he said.

"What it means personally and for my team is that what we are doing is impacting in not only in the current industry, but there is a future where this technology can lead to," Sahu said. The company has about 40 customers in eight countries, including civil engineering, mining, drilling and excavation companies.

One of the judges, Marissa Campise, said the judges were impressed with the technical solution Strayos presented – providing for safety on job sites – and the Buffalo tie-in he laid out.

"I loved that he recognized the University at Buffalo as having the most important hires and technical talent for his specific business, because that means he's going to grow his company here," Campise said. "For his particular business, the unfair advantage is having those kinds of engineers build the company. You can't just hire anyone." 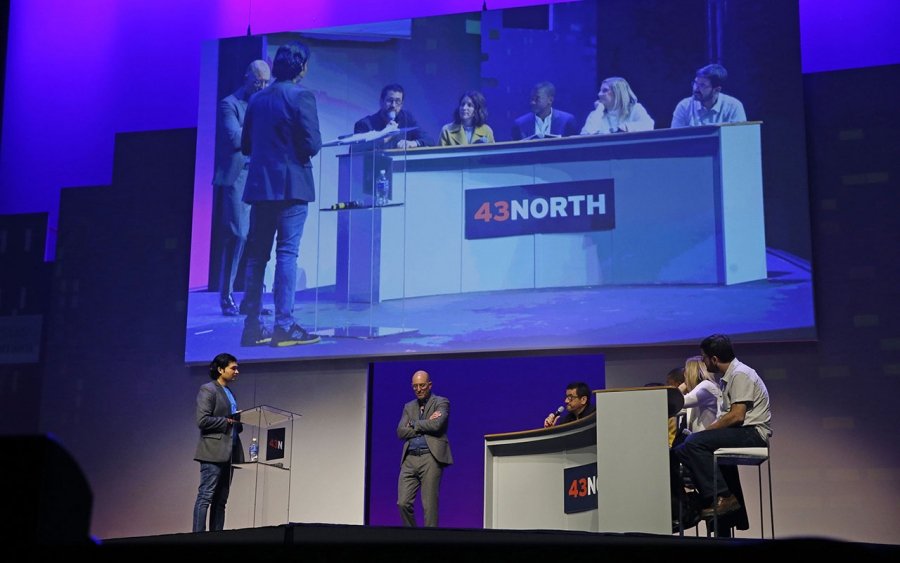 Strayos was among 10 finalists that competed for $4.5 million in prize money at the 43North business plan competition Wednesday.

While the $1 million prize is a major investment boost for Strayos, the hope is that the company – and the seven other prize winners – will grow roots in Buffalo, hire more people, and attract more investment.

Since its inception, the 43North competition has aimed to bolster the region’s start-up ecosystem, a segment of the local economy that was seen as lagging compared to some other parts of the country.

The 10 finalists advanced to the main event at Shea's Buffalo Theatre after judges reduced the field from 15 at a qualifying round Tuesday. A different set of five judges listened to the pitches and chose the winners of the competition at Shea's.

Before the pitches, Mary Wilson, wife of the late Buffalo Bills owner Ralph Wilson, appeared at Shea's to announce a $3 million gift to 43North from the Ralph C. Wilson Jr. Foundation.

Eight of the 10 finalists won prize money. The grand prizewinner claimed $1 million, while seven other companies were awarded $500,000 each. Two other companies did not win any prize money. An additional $500,000 will be set aside at the end of 2020 for the class of 2019 award-winners to contend for.

The eight award winners must base their operations in Buffalo for at least one year, and 43North takes a 5% equity stake in the companies.

Circuit Clinical, Buffalo: The Delaware Avenue-based company – the only local startup still in the competition – makes it easier for patients to enroll in clinical trials as a care option.

GroupRaise, Houston: Online system that allows restaurants to book dinners for big groups and donate a share of the profits to a nonprofit.

Peanut Butter, Chicago: The tech company with the quirky name offers student loan assistance to companies as a benefit.

Rally, New York City: Rally promotes itself as ride-hailing for luxury motorcoaches, allowing people to either create their own trips, or sign up for planned trips, to events like festivals and sporting events. The company has a partnership with Pegula Sports and Entertainment for trips to Bills games.

Whose Your Landlord, New York City: The company focuses on the rental housing market, with landlord reviews. The company founder's parents met as students at Niagara University.

BridgeCare, a workplace benefit administrator, and HotelsByDay, a company that offers booking hotel rooms for daytime hours only, did not win awards Wednesday.

Among the five companies eliminated in Tuesday's qualifying round were Glaze Prosthetics, based in Poland, and Capti, which recently moved its headquarters to Buffalo from Long Island.

This is the sixth edition of 43North, which was launched as part of Gov. Andrew Cuomo's Buffalo Billion program. The competition's standout past champion is ACV Auctions, a fast-growing tech firm based in Buffalo.

43North is preparing to move its home base to the Seneca One tower from the Innovation Center on the Buffalo Niagara Medical Campus.