Just eight years ago, the Chandler Street neighborhood was reeling.

The low point came in July 2011, when a massive, four-alarm chemical fire ravaged the Niagara Lubricants plant at 164 Chandler St., causing millions of dollars in damage and a host of environmental scares for the surrounding neighborhood.

Since then, a remarkable transformation has taken place on Chandler Street, led by developer Rocco Termini, that has turned a deteriorating Black Rock industrial area into a trendy stretch of renewed buildings with restaurants, offices and startup businesses. In all, Termini has invested about $50 million in the historic rehab efforts to rejuvenate the street, including extensive environmental remediation work on aging and neglected buildings.

Termini already has converted 155 and 166 Chandler into office and restaurant space for other businesses and startups, including Tappo Pizza, Thin Man Brewery and technology firm Utilant.

The latest projects to open – completed with economic development funding from National Grid – features a first-floor restaurant in one of the buildings, Waxlight Bar A Vin, plus 16 commercial kitchens, loading docks and production space for new or young businesses. 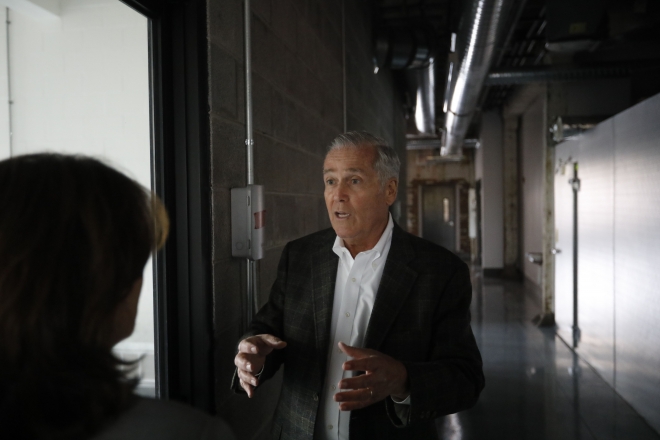 Flat No. 12 Mushrooms is one of them. For the last six years, Rob Gianadda and his partners have been growing mushrooms in a basement "farm" for their startup wholesale business, which primarily produces oyster and shitake mushrooms that are mostly sold to local restaurants, plus a few small grocers. It's pretty much been a shoestring operation, started on a whim and built on their own after Gianadda and his wife became interested in where their food comes from.

But he has ambitions to grow the firm. So when the opportunity arose to double his space and professionalize his operation as a major tenant in Termini's new business incubator hub on Chandler Street, Gianadda seized it.

"This opportunity came up, and it was too good to pass up, so we decided to jump on it," he said.

The 35,000-square-foot complex, located in a pair of former industrial warehouses at 27 and 37 Chandler in North Buffalo that are connected by a second-floor skybridge, are located in long-abandoned facilities that were converted into new work space for food-service companies. 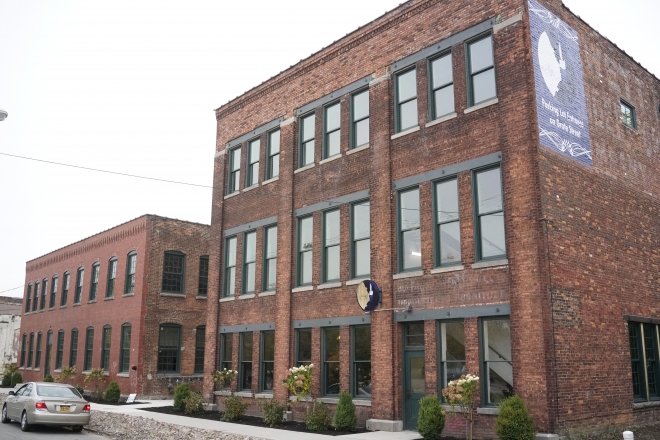 Termini said he is focusing on startups because he saw a need to help them grow, while helping the region retain its young people. He partnered with the state and SUNY Buffalo State, so some of the tenants in the four buildings are linked to the school's Student Inc.Ubator program, which helps students improve their business skills, and to Empire State Development Corp.'s Start-Up NY initiative, which provides tax incentives for new and expanding companies.

"We’re really trying to revive this whole street, and make it a live, work and play street," Termini said. "Over the last 20 years, we lost a ton of young kids, and they moved out of town. So what we were trying to do on this street is provide spaces that young people are attracted to."

"There’s nobody in this area, or in this country, that has taken on more ambitious and more challenging projects than Rocco Termini," said Rep. Brian Higgins, D-Buffalo. "He has been doing project after project that always challenge the limits of what is possible in a city that has learned to believe in itself again."

To do the renovations, Termini was able to tap into a wide range of financial incentives, including $14 million in state and federal historic tax credits, as well as state brownfield and federal New Markets tax credits.

National Grid approved four separate $300,000 brownfield redevelopment grants, for a total of $1.2 million, to fund abatement and electricity costs on all four projects.

"They've helped with programs for this whole block," said Assemblyman Sean Ryan, D-Buffalo. "Usually they provide the juice in the most common way, in electricity, but in this project, they provided some of the juice to capitalize the project."

Those grants came out of one of the 19 economic development programs that National Grid runs, designed both to support communities and draw in new customers. To date, Western New York – at $40 million – has received more money from those programs than any of the company's other geographic regions, said National Grid Regional Director Ken Kujawa.

"These economic development grants that we have provided Rocco signify our commitment to the City of Buffalo and to Western New York," Kujawa said. "Rocco Termini has earned a reputation as a visionary who sees a vacant building and the opportunities and possibilities that they present.”

Across the street, 155 Chandler is an 85,000-square-foot former Linde Air manufacturing plant, built in 1930. After an $11.5 million rehab, its new tenants include Utilant, ENrG Inc., Barrel + Brine Cafe and Taproom and Blackbird Cider Works, as well as a tax accounting firm and a call center. It also features two apartments and a courtyard for volleyball, bocce and other activities. 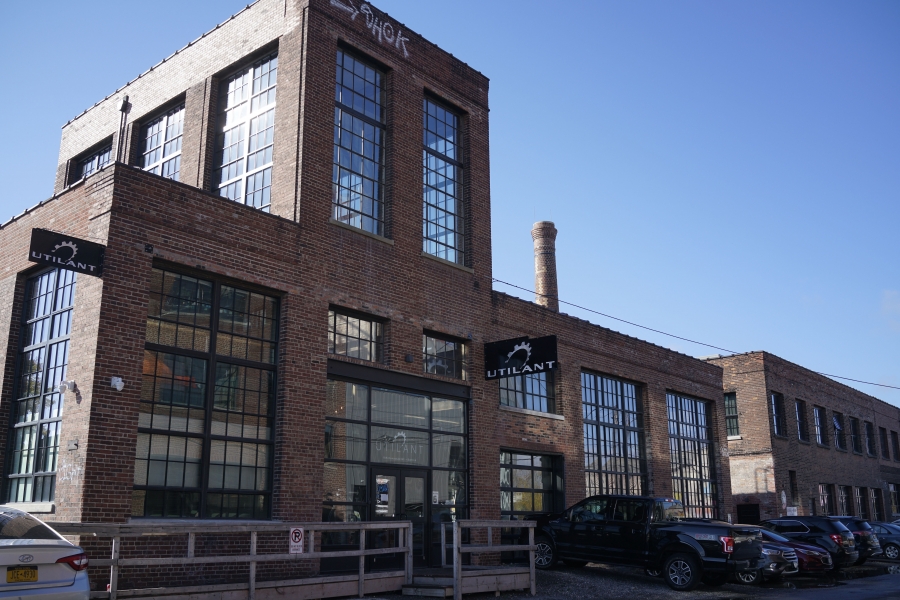 Finally, there are now 15 commercial kitchens and other incubator space on the upper two floors of 27 Chandler, a 21,000-square-foot former Jewett Refrigeration manufacturing facility that was built in 1905 and renovated for $6.7 million.

All but two of the new commercial kitchens are spoken for by new foodservice tenants – including for barbecue, fresh salmon, cake-makers, bakers, chocolatiers and ice cream makers. There's also a new Lloyd Taco test kitchen in the complex.

The company relocated from 2,000 square feet on Mason Street, and is creating an indoor urban farm in its new home, with cultivation and growing space, as well as a production area, kitchen and loading dock. There's even space for retail sales.

"That’s a big step up for us for quality, for dependability, for reliability of deliveries," Gianadda said. "Now we can go next door and ask some of the best chefs in Buffalo what they want or for help developing new products."

Flat No. 12 currently sells to restaurants, a couple of farmers markets and small grocers like Lexington Co-op, but Gianadda wants to add more customers and expand the company's product line to include "shelf-stable" items in addition to the fresh produce. That could include canned, pickled, fermented and dehydrated mushrooms, as well as sauces. Gianadda also wants to diversify the varieties to include chestnut and lion's mane mushrooms. 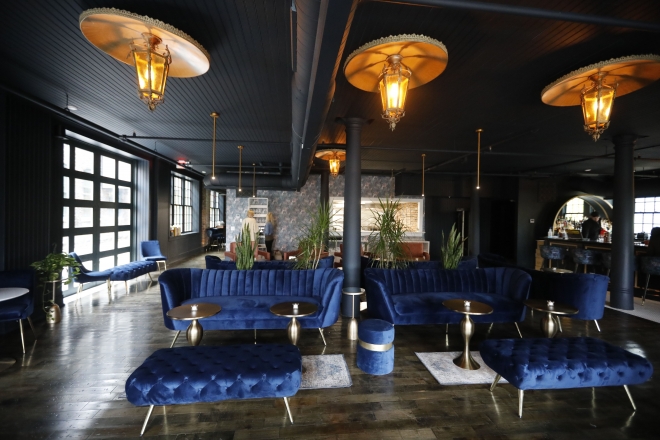 Waxlight Bar a Vin takes up the first floor of 27 Chandler St., a redeveloped building that features 14 commercial kitchens for professional food operations on the upper floors. (Derek Gee/Buffalo News)

"There are lots of ups and downs, and ins and outs, to packaging and shipping fresh produce, so we thought it would be wise business choice to expand our product line into something a little more shelf-stable, so we can put it on shelves for people not just in Western New York," he said. "This is going to allow us to do that."

Meanwhile, Termini says he's not done yet with Chandler Street. A new pool club is underway, and two additional restaurants will be constructed in the next 18 months, by restoring existing buildings that Termini also purchased at 145 Chandler and across the street. He said he is currently in negotiations with potential operator tenants for the eatery space.

There's also "lots of vacant land," and the developer is already formulating some ideas for those parcels. "You have to make this street a destination to get people here, and that’s what we’re trying to do," he said.