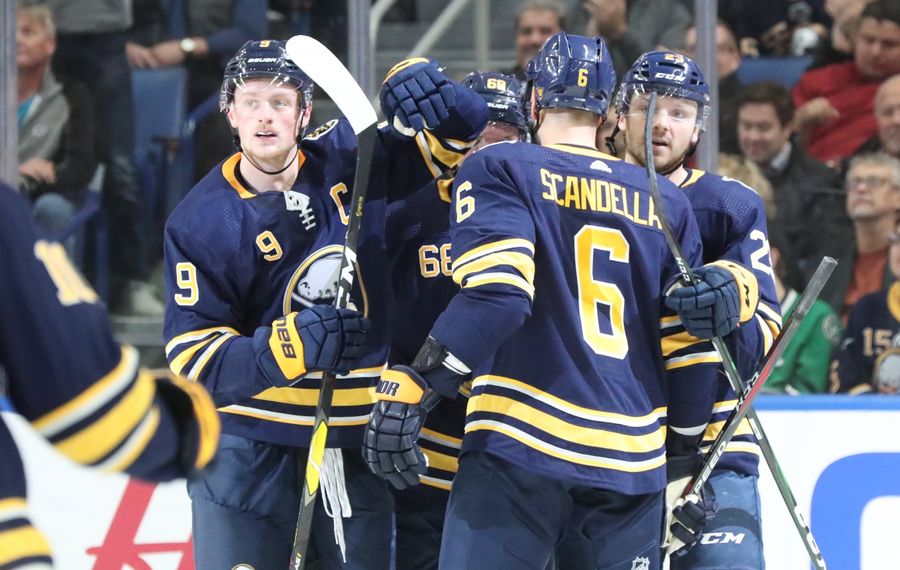 Jason Botterill does not intend to trade one of his defensemen. At least that's what the Buffalo Sabres' general manager has said publicly since the season began almost a month ago.

The Sabres' schedule following the trip to Sweden will test their depth and they've struggled to play well following injuries in the past. However, there could be a logjam once Brandon Montour and Marco Scandella return from injury.

Will Botterill pull off his first big trade of the season? Let's start there with my latest mailbag, which features questions from our readers.

The Real Radman: With Rasmus Ristolainen playing well and eating minutes, which defenseman gets traded when Brandon Montour returns?

Lance Lysowski: None of them will be traded. For now, at least. The Sabres don't have salary-cap restrictions after placing Zach Bogosian on long-term injured reserve. They will likely need to create room at some point, especially if Botterill intends to add to this roster before the trade deadline in February, but there won't be a rush to make a move.

We saw last week how quickly defensive depth can be tested. The Sabres almost lost Scandella and Jake McCabe to injury on consecutive nights. Scandella is out two-to-three weeks with a lower-body injury, while McCabe missed time against Detroit because he required stitches. Botterill told reporters last week the Sabres will need all these defensemen at some point because the schedule is condensed this season.

A trade will happen eventually. Scandella seems like the logical candidate to be moved since he'll be an unrestricted free agent following this season and is the type of veteran who contenders are looking to add at the deadline. The Sabres will have issues if/when Bogosian returns, but there are no signs that's going to happen anytime soon. Roster spots are the bigger concern right now.

Will Borgen was returned to Rochester on Tuesday, but the Sabres are going to need to bring up a forward for their trip to Sweden. They can’t risk having only 12 when traveling across the globe. They can't risk having only 12 when traveling across the globe. Scandella or Jimmy Vesey will need to be placed on injured reserve to create room, unless the latter is available to play during the trip. The Sabres will have no interest in trying to pass defenseman John Gilmour through waivers.

Adam Gosse: Would the Sabres be buyers at the trade deadline if they're still contending in February? If so, what do they need?

Lysowski: Absolutely. Botterill isn't afraid to make a significant move to add to his roster. Remember, he acquired Montour last February when the Sabres were fading out of playoff contention.

I'm sure Botterill would prefer to not trade draft picks since he lost three by acquiring Colin Miller and Vesey, but this organization finally has solid prospect depth. The Sabres could afford to use those assets to supplement the roster in Buffalo. Although I don't see them adding a player making $8 million a year, Botterill should be able to add some salary. Botterill is as good as anyone in the league at managing the salary cap, so he could find a way to make the right trade work.

That said, don't expect the Sabres to make a huge splash. They shouldn't have to as long as their core players stay healthy. I could see Botterill making subtle moves for a playoff push. Though the Sabres improved their forward depth over the offseason, I'm of the opinion it would be wise to add at least one more forward with playoff experience.

While Evan Rodrigues has proved capable of playing in the National Hockey League, the Sabres miss what Vesey provides defensively. Vesey's work without the puck helped create possession and scoring opportunities for Casey Mittelstadt. Curtis Lazar and Jean-Sebastien Dea could be serviceable fill-ins, but it wouldn't hurt to add more talent to that group.

Svoktish: At what point should the Sabres be considered a serious contender? The fans have been down this path before.

Lysowski: I understand the skepticism, especially after what happened last season. Players I've spoken with aren't taking this hot start for granted. They know how quickly a season can turn. So much can happen over the course of 82 games. Injuries can derail a team. We have yet to see how Ralph Krueger will manage his players during a difficult stretch. Sure, there have been a few minor bouts with adversity but nothing significant.

We won't know if this team is a serious contender until February. That's when the speed of the game increases and playoff teams begin to emerge. You can't win a playoff spot in October or November but you can lose one. They are amid one of their best starts in franchise history and sat atop the NHL standings entering play Monday, despite having a new coach with new systems and turnover on the roster.

Krueger has done an exceptional job coaxing more out of this group and there's no question this Sabres team is better than the one Phil Housley coached last season. Miller, Vesey, Marcus Johansson and Henri Jokiharju were significant additions. Plus, Victor Olofsson wasn't in Buffalo until March last season. They're playing the type of hockey that fans here have been clamoring for, but we're months away from knowing if that's going to translate to bringing playoff hockey back to Buffalo. Hockey in October is far different than January, February or March.

SStickshift: Who will the Sabres call up from Rochester when they send Evan Rodrigues down?

Lysowski: This doesn't seem like a possibility at the moment. You'd like to see Rodrigues generate more scoring chances and that line's production has dipped since Vesey was injured last Thursday in New York, but it's too early to pull the plug.

It's not easy for a player to sit that many games and be expected to contribute at a high level. He showed some improvement Monday against Arizona by drawing a penalty and playing better without the puck. Give him a few games to see if the group generates more time in the offensive zone. Rodrigues is still a valuable player since he can play center or wing. The Sabres will have no interest in bringing up Tage Thompson since that would require him to play alongside Casey Mittelstadt and Conor Sheary.

Mittelstadt is best served by playing with wingers who are strong defensively and on the forecheck. That will allow him more freedom to take chances in the offensive zone. The more likely promotion is Lazar because he can bring those elements on the ice. Rodrigues will be given every chance to show he can fit in Krueger's system. The Sabres' 5-on-5 Corsi For Percentage with Rodrigues on the ice is 48.94%, fourth among forwards with at least six games played.

Viktor: Will The Buffalo News have a reporter covering the Sabres' trip to Sweden?

Lysowski: Yes, Mike Harrington will be in Stockholm for the entire trip, beginning with the Sabres' practice Monday at Ericsson Globe and culminating with the second game against Tampa Bay on Saturday.