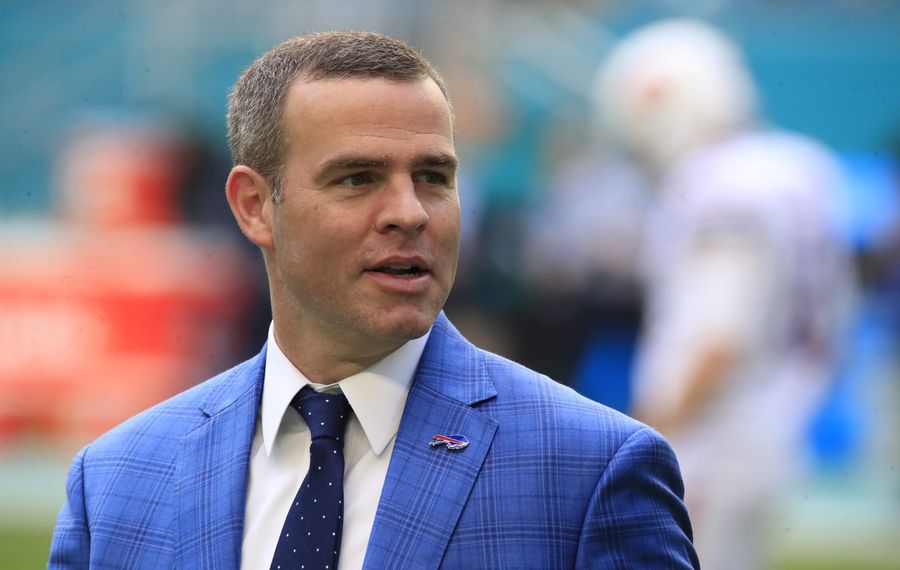 Social media predictably hurled a fair amount of sharp criticism – accompanied by the requisite sophomoric insults – at the Buffalo Bills for their inactivity before Tuesday's NFL trade deadline.

I'm fine with them doing nothing because, for all of the chatter about the need for instant offensive help, there was nothing for them to do.

Nothing sensible, that is.

The heightened anticipation of a likely move by the Bills was understandable. They have $24.726 million in salary cap space, more than enough to accommodate adding the contract of a big-name talent. They're 5-2 and have enough soft spots left on their schedule to make a strong playoff push, even after their not-ready-for-prime-time showing Sunday.

According to an NFL source, General Manager Brandon Beane and his player-personnel staff had "plenty of discussions" about making a deal of some sort. What they discovered, per the source, was what most of the rest of the league found out: There was far more hype about players supposedly being "available" than was actually the case.

There's no disputing the Bills are flawed. They have glaring issues in all phases that could very well become obstacles in their presumed path to the postseason. The interior defense needs to tighten up, and had the Bills landed a viable tackle – even for depth – I would have been all for it. Penalties need to be reduced, and fast, but that's something for Sean McDermott and his assistant coaches to address.

Of course, the area drawing the greatest attention is an offense that struggles to score. This, more than anything, prompted the loudest demands for the Bills to make a trade.

However, giving up a high draft pick or two for Cincinnati Bengals wide receiver A.J. Green – the most popular target of the social media crowd and who wound up going nowhere – would have been ludicrous.

For one thing, as weak as the AFC generally seems, the Bills are not one or even two dynamic pass-catchers away from reaching the Super Bowl. For another, as accomplished a career as Green has had, he wouldn't have suddenly transformed the Bills' offense into a scoring machine.

If the Bills' offense is to become explosive, it will mainly result from Josh Allen developing into the elite quarterback the team envisioned when it made him the seventh overall pick of last year's draft. He's not there yet. Some might argue he isn't close, especially with the misfires and poor reads he had in the loss against the Philadelphia Eagles on Sunday.

Allen remains a work in progress. But spending premium draft assets on other players on the assumption they would promptly elevate his play and enhance the Bills' chances for a playoff run is a fallacy. The Bills tried that in 2014 by trading up for Sammy Watkins in order to make EJ Manuel a better passer.

How did that work out?

Another name that was linked to the Bills, via ESPN, was Los Angeles Chargers running back Melvin Gordon, who also wasn't traded. The thought that the Bills' offense, which has yet to maximize the talented running backs it already has in Devin Singletary and Frank Gore, would benefit by the addition of another ball carrier was just silly.

The loss to the Eagles on a wind-swept day that should have minimized passing (something the visitors understood better than the home team) showed the shortcomings in the Bills' ground game can be easily fixed.

One, when you set out to get Singletary more involved in the offense, which offensive coordinator Brian Daboll said was the plan, hand the ball to him rather than look to throw it to him. Two, show a greater overall commitment to the run. You can count on the Bills' remaining opponents to follow such a script, especially after seeing the Eagles do it to the tune of 218 yards.

The Bills aren't great and are unlikely to get in the way of another New England Patriots AFC East crown. But the roster they have is sufficient to allow them to win enough games for a wild-card berth.

They have the draft capital to be significantly better in 2020, which was what drove them to do the sensible thing by standing pat Tuesday.