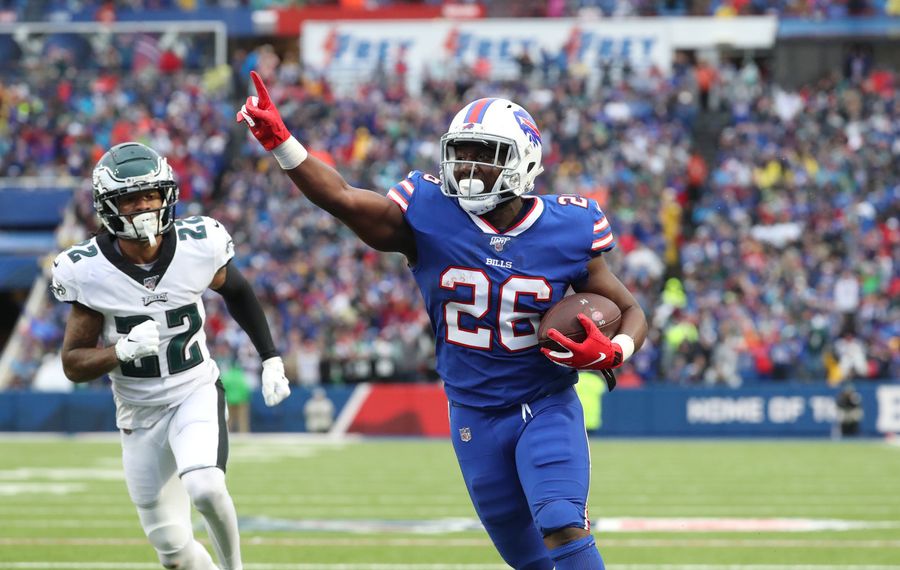 The Buffalo Bills’ offense is in need of a spark.

Perhaps that comes from outside the organization ahead of the NFL trade deadline, which arrives at 4 p.m. Tuesday. If not, though, it will have to come from within. That means it’s time to get Devin Singletary more involved.

The rookie running back inexcusably did not get a carry in the first half of Sunday’s 31-13 loss to the Philadelphia Eagles at New Era Field. His only touch before halftime came on a quick completion that lost a yard on the final play of the first quarter.

"Early in the game, we were trying to get him into a little bit of space in the passing game," Daboll said. "Some free releases there I'd say within the first 10 (plays). Ball didn't go his way, but definitely a guy, we'd like to have him touch the ball. ... We've got to keep working on that."

Perhaps sensing the need to get Singletary more involved, Daboll called his number right away in the third quarter. Singletary showed why it was a good idea, gaining 10 yards on a run off left tackle. Unfortunately, that play was wiped out by a holding penalty against tight end Lee Smith.

Quarterback Josh Allen then looked Singletary’s way on first and 20, but a pass to the flat was dropped. The offense was able to stay on the field, though, and Singletary capped the drive by taking a flare pass 28 yards for a touchdown on a third-and-13 play. That cut the Bills’ deficit to 17-13 with 9:44 left in the third quarter.

It also raised a fair question – shouldn’t more be done to get Singletary involved sooner?

"I mean, we want to get the ball in the hands of our playmakers," coach Sean McDermott said. "You saw what Devin can do early in the season."

The Bills rank 19th in total offense, averaging 345.7 yards per game. More importantly, they are just 24th in points per game, at 19.1. Sunday showed that relying on the defense to carry the load every week won’t work. Singletary has the type of big-play ability that requires more than the three carries he got against the Eagles. Those three carries, for what it’s worth, produced 19 yards, an average of 6.3 per rush. It's worth pointing out that 16 of those yards came on the game's final play, when the Eagles' defense didn't have much of an incentive to stop him. Nevertheless, on 20 carries this season, Singletary has gained 172 yards, an average of 8.6 per carry.

“His poise – he doesn’t act like he’s a rookie,” right tackle Ty Nsekhe said. “When his number’s called, he makes plays.”

"Were there plays that I want back and I'm sure Brian wants back? Absolutely," McDermott said. "That's why I was up late last night, up again early this morning, trying to evaluate all three phases. ... We've just got to continue to grow, continue to work out some of the kinks that are preventing us from scoring points, because at the end of the day, you've got to score points, and we haven't scored enough points."

That's something Singletary did better than anyone in college football over the past three seasons, when he reached the end zone 67 times for Florida Atlantic. The flashes he's shown in his four games with the Bills have led many to call for him to get more touches.

“I wouldn’t say I’m disappointed,” he said in the losing locker room of his usage. “Whenever my number is called, I’ve got to stay ready. I can’t sit around and pout. I’m a team player, so whatever the team needs, I’m going to be there.”

Singletary is generally reserved in media interviews. He doesn’t come across as the type of player who would ever go the Sammy Watkins route and say how many touches he needs in a game, but he doesn’t have to. The results speak for themselves.

“Not anxious,” Singletary insisted when asked about taking on an expanded role. “Just got to sit back and, like I said, whenever your number is called, you’ve got to be ready. That’s just staying cool, calm and collected.”

The Bills don't have Singletary on any kind of rep count after he missed three games earlier this season with a hamstring injury. He practiced fully leading up to Sunday’s game and led the Bills’ running backs in snaps with 42, which was 68% of the team’s offensive total and a good deal more than veteran Frank Gore’s 18 snaps.

Gore, however, had nine carries, meaning he had two more touches than Singletary, who added four catches for 30 yards to go with his three rushing attempts. Again, it's worth pointing out that Singletary had two drops, so he could have had more touches.

“We’ve got to just do whatever our coaches say," Gore said. "Whenever his number gets called, he's got to do something with it, like he did today."

Should his number get called more, Gore was asked.

"That's on the coaches," he said. "The coaches make that decision. I'm not a coach."

Someone has to get it. The Bills’ linebacker made 13 tackles in coming back from a hamstring injury. Three of those tackles went for losses, and eight of them were within 3 yards of the line of scrimmage.

The 5-2 Bills have a half-game lead on the 5-3 Texans for the first AFC wild-card spot. Buffalo is 1.5 games up on 4-4 Jacksonville and 4-4 Tennessee, but holds the head-to-head tiebreaker over the Titans. Still, it was a bad day in both Orchard Park and on the out-of-town scoreboard.

Quote of the day

“We were able to wear the defense down. You could tell at the end of the game they really didn’t want to tackle us.” -- Eagles running back Jordan Howard to NBC Sports Philadelphia after his team gained a whopping 218 yards on the ground. Howard ran 23 times for 96 yards, while Miles Sanders added 74 yards on just three carries, including a 65-yard touchdown.

"A good indication would be when they were trying to run the clock out," Frazier said. "Kevin Johnson comes off the edge and gets a tackle for loss on fourth and 1. We wanted to tackle. We wanted to finish the game, not with them kneeling to end the game. Our guys stood up in that situation."

1. The rotation at right tackle changed from Week 7, with veteran Ty Nsekhe seeing more work than rookie Cody Ford. Nsekhe took 36 snaps (58%), while Ford took 26 (42%). It was announced late in the fourth quarter that Ford had suffered an elbow injury, which may have factored into that usage.

3. Milano wasn’t on a rep count in his return from injury, playing all 73 defensive snaps. As a result, veteran Lorenzo Alexander’s usage dropped from 70 snaps in Week 7 to 31 in Week 8 (42%).

4. Cornerback Kevin Johnson played a season-high 35 snaps (48%). His workload was bigger than normal because starter Levi Wallace suffered an unspecified injury that limited him to 45 snaps (62%). Nickel cornerback Taron Johnson played 27 snaps (37%) as the Bills continued to rotate at that position. Safety Dean Marlowe played 19 snaps (26%).

"Some of it was because of where he is in coming back from the injury, but also some of it was the strategy with their personnel as well," Frazier said of continuing the nickel rotation.

5. Running back Senorise Perry has quickly become a key part of special teams. He was one of six players to play 19 snaps on special teams (73%). He was joined by Siran Neal, Julian Stanford, Jaquan Johnson, Darryl Johnson Jr. and Maurice Alexander.

The Bills conclude a three-game homestand when they welcome Washington to New Era Field at 1 p.m. Sunday. Here are three things to know about the Redskins …

1. They’re coming off extra rest. Washington played on Thursday Night Football in Week 7, losing at Minnesota, 19-9. The loss dropped the Redskins to 1-7 and continued what has been a disastrous season. Washington has already fired head coach Jay Gruden, replacing him with Bill Callahan on an interim basis.

"I know what their record suggests, but this is a good football team," McDermott said Monday of the Redskins. "You saw how they played the Vikings, who are a good football team, so we expect a good game this week. They're well coached by coach Callahan. I have a lot of respect for him and his staff so we've got to make sure that we have a good week of preparation here."

2. They might have a new starting quarterback. Case Keenum entered the NFL’s concussion protocol at halftime of the game against the Vikings, with rookie Dwayne Haskins replacing him. Callahan said that Keenum will start if healthy. Haskins has struggled mightily in two relief appearances, throwing four interceptions on 22 pass attempts.

3. Rookie wide receiver Terry McLaurin is off to a great start to his NFL career. McLaurin leads all rookie receivers in catches, yards and touchdown receptions with a 28-458-5 line.