Timothy Leboeuf is learning some valuable lessons in how not to handle development in a historic, low-income neighborhood like Buffalo's Fruit Belt.

First rule: The fear of gentrification is real, it's strong, and it's not to be taken lightly.

Leboeuf is facing opposition from Fruit Belt residents and citywide community activists to his $25 million proposal for a 131-unit apartment building at Michigan and Maple avenues near the edge of the Buffalo Niagara Medical Campus.

Critics denounced the proposal by Leboeuf's Symphony Property Management as being out of scale with the neighborhood of single-family homes dating back a century, and also harmful to a community where they say current residents couldn't afford to live in the new building.

"It’s not being built for our community. It’s being built on our community, for the Medical Campus," said Dennice Barr, president of the Fruit Belt Advisory Council. "We’re not going to be able to afford to live there."

That will damage the neighborhood's historic character, by focusing more on renting to outsiders than homeownership, and by eventually driving out longtime families – some who have lived there for generations, they said.

The five-story apartment building, aimed at medical professionals, students and service workers, is the first that would extend spinoff development from the nearby Medical Campus into the Fruit Belt. Residents for years have worried about the impact of land speculation and crowded street parking as the number of employees on the Medical Campus has grown to more than 17,000.

Development on the Medical Campus has helped drive the city's nascent rebound, concentrating jobs in the center of the city and bringing new buildings to Main Street and nearby blocks. But it has also touched off concern of some longtime residents worried that they will be outpriced as development spreads.

"The Fruit Belt is a community that has been gentrified, and we need to challenge this assumption that gentrification benefits," said John Washington, a community organizer with PUSH Buffalo. "Right now, what is being respected is the developer’s right to profit and not the community’s right to exist."

Neighbors say development will lead to higher taxes and make it even harder to find parking in the neighborhood. They say the water and gas lines aren't adequate to handle such a large influx of new people.

"What are you going to offer the community?" asked Veronica Hemphill-Nichols, founder and head of the Fruit Belt/McCarley Gardens Housing Task Force. "Will it cater to the community, or just the Medical Campus?"

They criticized the developer for failing to consider the impact on them and for not reaching out to them until a community meeting in September.

"How can developers come into the community and draw up schematics and plans without community awareness?" asked Terrance Hurd, who grew up in the Fruit Belt. "They should have the decency to come to them and explain how this is going to affect them in their neighborhood." 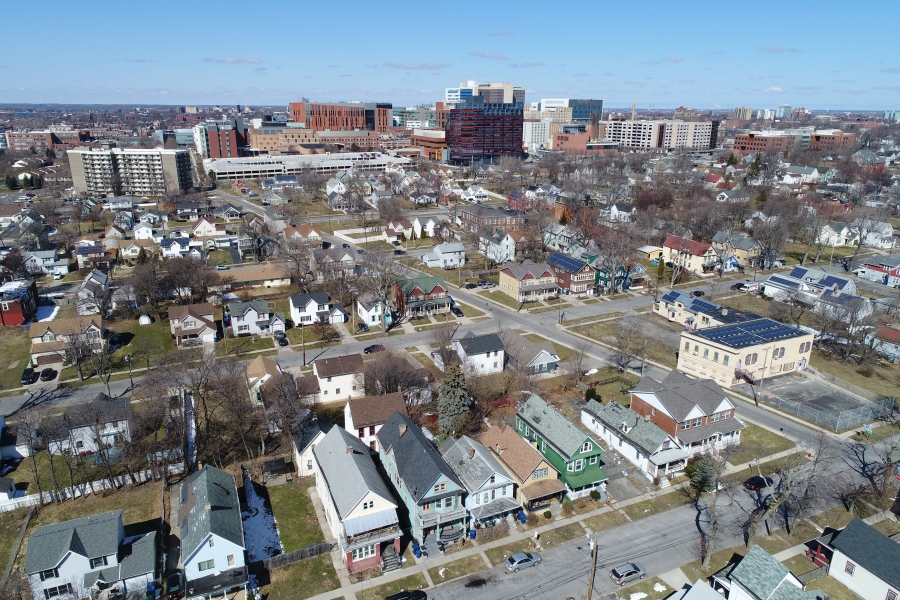 As a result, both the city Planning and Zoning Board of Appeals tabled the project at 983 Michigan, sending the developer back to the drawing board for at least a month or two, so he can take the criticism into consideration and make changes to the project, called the Lawrence.

"These are things we’re looking at," project attorney Marc Romanowski said. "I fully expect that we’ll be coming back with further revisions to the design."

Leboeuf said he intends to continue his efforts to develop the 1-acre site, which actually consists of 15 parcels, located across Michigan Avenue from Roswell Park Comprehensive Cancer Center. He said he hopes to break ground next year.

"We have a lot to think about," he said. "I wouldn't say that our project is locked in stone by any means. We're going to continue to push to get the Lawrence built, but we recognize we have to modify our approach."

Symphony's project marks one of the first big efforts to bring new development into the Fruit Belt, the historic neighborhood of century-old, single-family homes on streets named for trees. The neighborhood is predominantly lower-income and minority, but has faced encroachment because of its proximity to both downtown Buffalo and the Buffalo Niagara Medical Campus.

"You have to really be considerate with this kind of development," Hurd said. "It’s a slap in the face of people who are being pushed out. When you push people out, that’s not diversity. That’s an invasion."

The Medical Campus has experienced significant growth in recent years, with construction of the new Oishei Children's Hospital, the Jacobs School of Medicine and Biomedical Sciences, Conventus and the Scott R. Bieler Clinical Sciences Center at Roswell Park Comprehensive Cancer Center. That growth has brought more employees to the campus, along with patients and visitors, and has driven new development of housing, retail and medical office space in surrounding neighborhoods.

In particular, new projects have been completed, are in process or have been proposed along Main Street, in the Allentown neighborhood and both north and south of the Medical Campus. But there hasn't been much to the east until now.

Symphony's five-story project – named for prominent Harlem Renaissance artist Jacob Lawrence – would consist of three linked buildings with 44,000 square feet in all – one on Michigan, one along Maple, and a smaller connector in between. 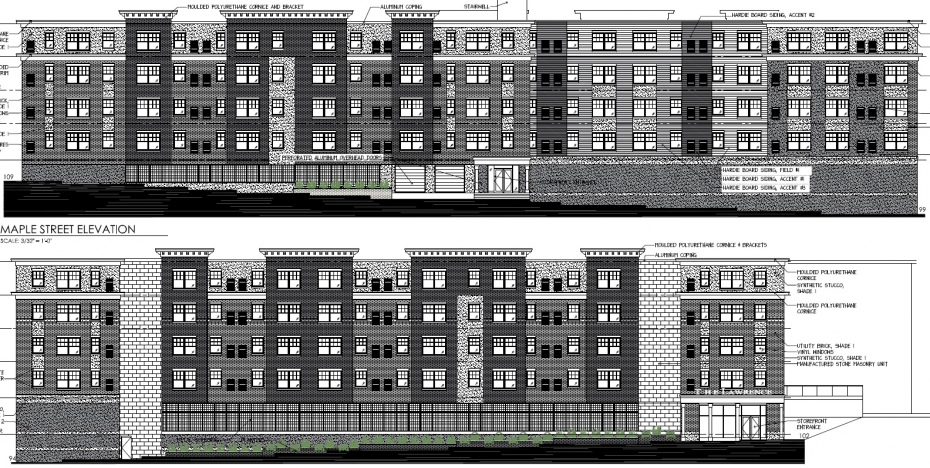 Architectural designs for the Lawrence. (Images courtesy of the Buffalo Planning Board)

Plans by Stieglitz Snyder Architecture would feature a mix of market-rate and affordable apartments, including 36 studios, 52 one-bedroom units and 42 two-bedroom apartments. A fitness center is also planned. Second-floor residents will also have private rooftop patios above the center section.

The design features synthetic stucco, brick, stone masonry and Hardie board siding of various shades, jutting in and out to break up the facade, with painted wood and synthetic cornices along the roofline.

The sloped property includes a 12-foot difference in elevation from the northwest corner on Michigan to the southeast corner on Maple. So the developer plans to use that to incorporate 74 covered parking spaces on the bottom level. That's more parking than recommended by a transportation demand management plan, but the developer agreed to look at adding additional spaces where possible.

"One of the things we’ve tried to do is address off-street parking," said architect Philip Snyder. "We know it’s a congested area and that’s been difficult for the neighbors, so we didn’t want to add to that."

The project straddles two zoning districts, and Symphony has asked for 10 variances from the Green Code for density, height, lot width, lot coverage, setback and other factors.

"The project is totally out of scale with the neighborhood. Please deny this request," said Lorna Peterson, who lives on Delaware Avenue. "The Fruit Belt is a residential neighborhood, and its historic character is to be protected."

Romanowski acknowledged that the height would be a concern, but said that's driven by the economics of the project. Prices of land near the Medical Campus "are exceeding $1.5 million or $2 million an acre," he said, so density is required to make it feasible.

But so is the parking. "It's a no-brainer that this is going to add to the congestion we already have in our community with parking," Barr said. 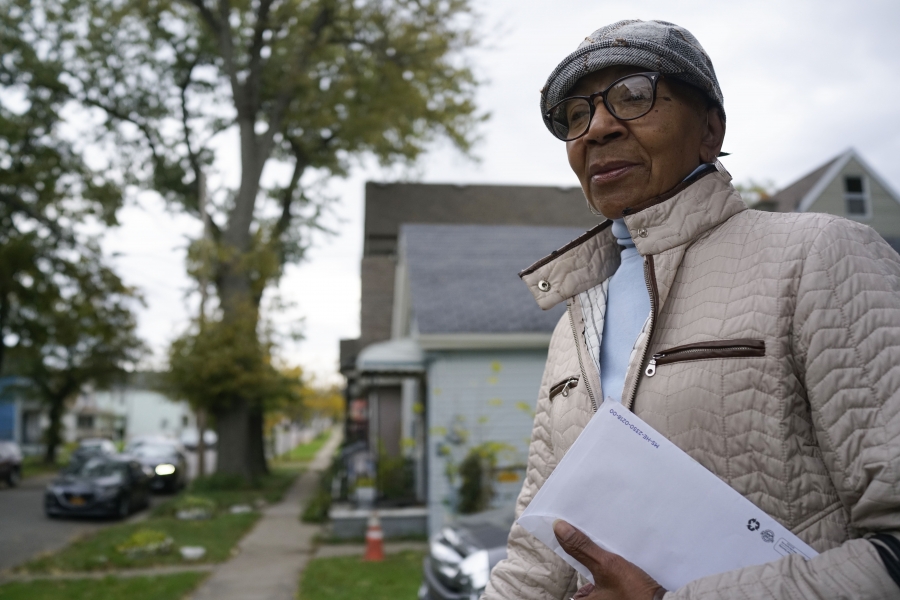 Annette Lott stands on the steps of the home on Mulberry Street that her parents bought more than 70 years ago. (Derek Gee/Buffalo News)

Annette Lott, president of Fruit Belt United, who lives on Mulberry Street and receives oxygen deliveries to her home, said she has to get a parking permit to park in front of her house. She also has to get permission from the city each time a delivery worker comes to her house.

"This is a home that my parents purchased over 60 years ago, and today, I have to ask if I can park in front of it," she said. "And I know none of you are doing that."

Planning Board members raised concerns, particularly with the larger of the buildings located on Maple.

"I have a lot of problems with this. It's not at all respectful of the neighborhood scale," said Vice Chair Cynthia Schwartz, who works for Roswell Park. "For me, the big issue is the Maple Street building. And I share the concern about parking."

Finally, the worries about gentrification persist. Noah Barr, one of five PUSH members who attended the meeting, said his mother lives in the Fruit Belt, in a home that's been in his family for more than 100 years. She's asked him to retain it, but he's not sure he can, and the Symphony project only adds to the pressure, he said.

"It's going to make me feel like I don't even deserve to live there," Barr said. "I grew up in the Fruit Belt. I simply don't think it's right."

Washington, of PUSH Buffalo, agreed. "This project is for white millennials," he said. "I just want you all to think about this day, 30 years from now, and that neighborhood 30 years from now. Will you see a black face in it?"