In the early 1990s, while attending college and working at a nursing home, Michael Kelly moved in with his elderly grandfather, Patrick Crotty, on Cumberland Avenue in Buffalo. It was a move that made sense. They enjoyed each other’s company, and Michael did not expect anything to feel like a big surprise.

That was before he looked with awe on what amounted to a quiet family shrine, in the back room.

The space was crowded with photos and memorabilia involving Lt. Thomas “Jimmy” Crotty, Michael’s great-uncle and a Coast Guard officer whose remains were never returned after he died in a Japanese prison camp during World War II.

Michael had never fully realized how Jimmy assumed such iconic meaning to the Coast Guard. Yet Michael's grandfather deflected any talk about his youngest brother, whom he helped to raise after their father died while the seven Crotty children still were young.

“You could tell how much he’d been hurt by it,” Michael said of the elder Crotty, who died in 1997. He simply wishes his grandfather could be around this week for Jimmy's homecoming, 77 years after the death of Patrick Crotty's younger brother.

The news has deep meaning not only in Buffalo, but throughout the Coast Guard. Jimmy Crotty is one of the most revered figures in Coast Guard history. An ordnance specialist, he is remembered for acts of stunning courage in World War II during the siege of Corregidor, and as the first member of the Coast Guard taken prisoner in wartime since the War of 1812.

His remains were positively identified over the summer. According to accounts of fellow prisoners in 1942, Crotty died of diphtheria while being held in the Cabanataun prisoner of war camp, one of 2,500 Americans lost behind those walls in the Philippines. He was buried there, in a mass grave known as No. 312.

Following the war, American forces exhumed the remains but lacked the technology for positive identifications. They were interred in a common grave at the Manila American Cemetery until 2018, when they were removed by the Defense POW/MIA Accounting Agency, which started testing for DNA matches. 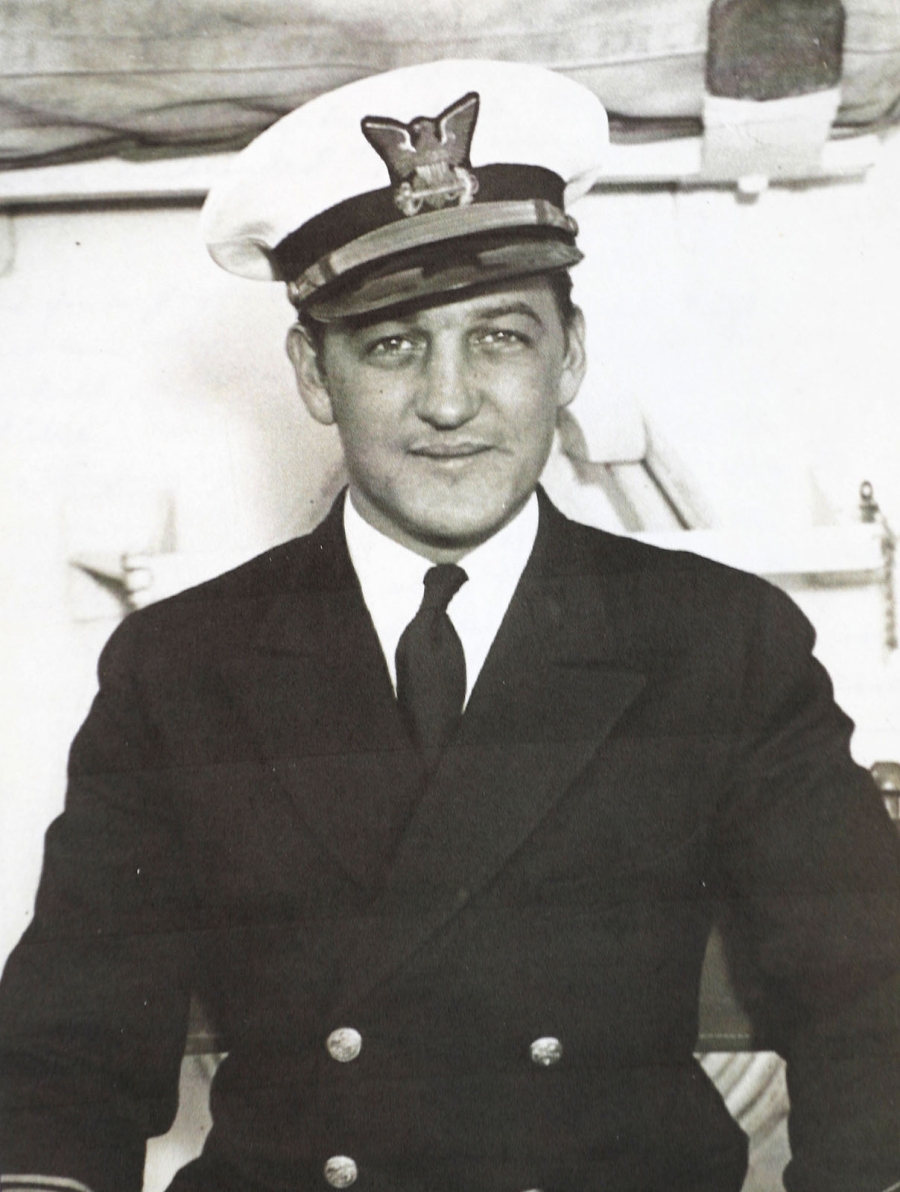 That technology has offered new hope to families that despaired long ago of solving these mysteries. Last weekend, in Dunkirk, Kareen Briggs Simmons spoke of “miraculous closure” at a memorial service for her brother, Sgt. Gerald Raeymacker, whose remains had been identified and returned from North Korea almost 70 years after Raeymacker was killed.

A similar call happened in September, when Pat Crotty – Patrick's 77-year-old son in Orchard Park – received notice that his uncle had been identified, a finding later officially confirmed when Coast Guard officers paid a visit to his house.

“We didn’t expect to see this happen during our lifetimes,” said Peggy Crotty Kelly, Michael’s mother and Jimmy’s niece.

For the Crottys, the discovery has an aching and intimate quality. That power is magnified by what it means to the Coast Guard, expected to send senior officials to the services.

Jimmy's family still has many of his letters, written in a warm and almost formal style. A note to Patrick is signed, "your loving brother." He offered this wish in a final note home to his mother, Helen Crotty, in February 1942, a month before his 30th birthday:

"The one thought forever kept in mind is for a joyful return to the homeland, so that we can enjoy fully the sincere happiness which is only to be found amidst family tides."

The son of Irish immigrants, Jimmy Crotty was a star athlete at South Park High School, a guy who coached and managed an American Legion junior baseball team to a 1929 national championship. The late Peter Crotty, who became Erie County Democratic chairman, was a first cousin.

Jimmy went on to play basketball and serve as captain of the football team at the Coast Guard Academy, before beginning active Coast Guard duty that would lead to an assignment with the Navy in 1941, amid the looming threat of war with Japan.

He trained extensively in mine warfare, to the point that Thiesen described him as the Coast Guard’s leading expert on explosives. Jimmy paid a final visit to his family in Buffalo on Sept. 2, 1941, before he left for duty with the Navy in the Philippines.

In December, after the Japanese bombed Pearl Harbor and launched an assault on American forces at the Cavite Naval Yard, Jimmy was among the Americans who took shelter in a fortress at Corregidor. Once there, he began the high-risk duties – often in the darkness – that lifted him into legend. 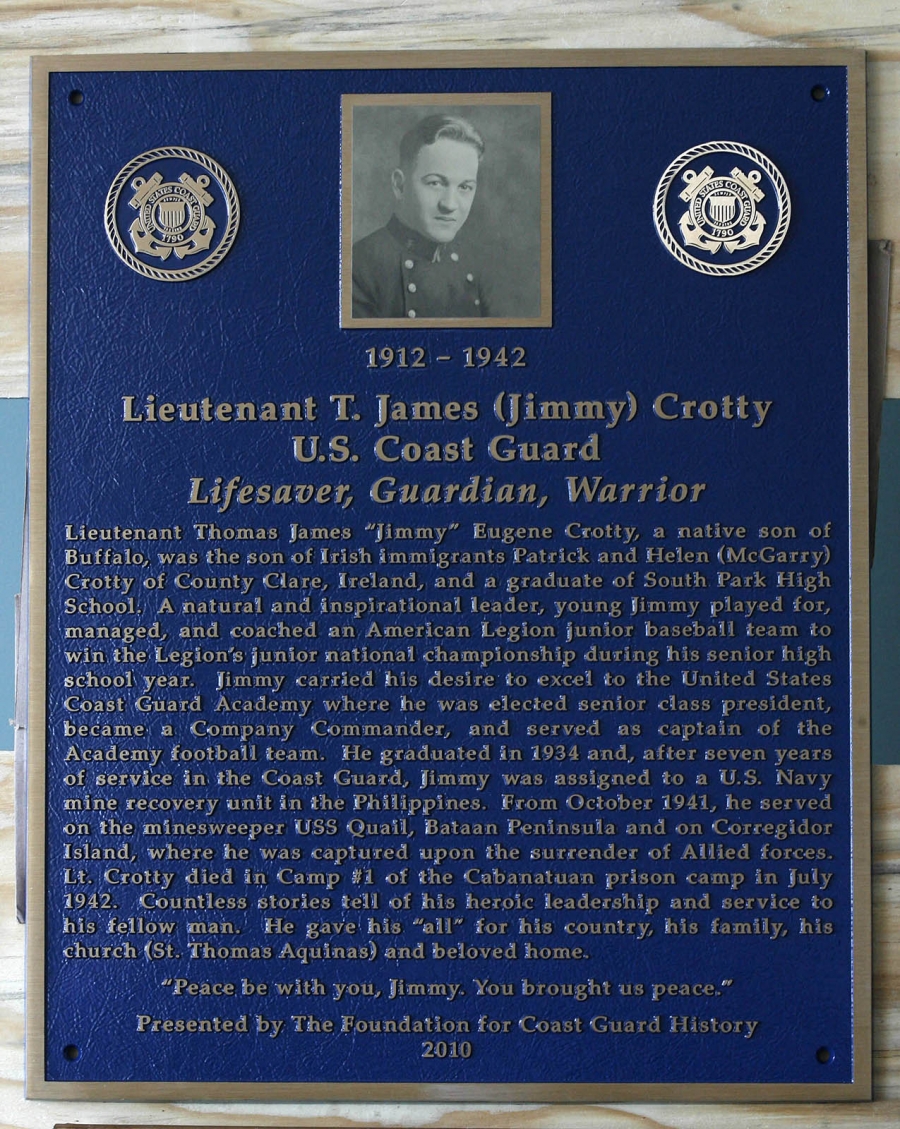 Jimmy led a secret effort to strip and detonate the USS Sea Lion, a damaged American submarine, thus keeping it out of Japanese hands. He was second-in-command on the Quail, a minesweeper that coordinated the bombardment of Japanese forces hidden on the island.

Thiesen said Jimmy also took part in duty of almost indescribably high risk. He would command one of two small  motor boats that went into the bay at night, drawing a chain between them. In this way, they would discover hidden mines, bring them to the surface and their crews would shoot at them until they sank, thus clearing a path for American submarines.

The siege finally ended in an American surrender on May 5, 1942, which led to Crotty’s journey to the prison camp – and his death, in a diphtheria epidemic, in July.

Within the U.S. military, a branch or unit typically receives a wartime Battle Streamer for taking on a significant part in a pivotal campaign or battle. Part of the reason for Crotty's legend is that his singular courage and resilience amid the siege was enough by itself to give the Coast Guard a Philippines Defense Battle Streamer.

Peggy Crotty Kelly, Pat's sister, is Michael's mother. Even before her son came to the same realization, she witnessed how the sadness of Jimmy’s death in the Pacific never left her father. 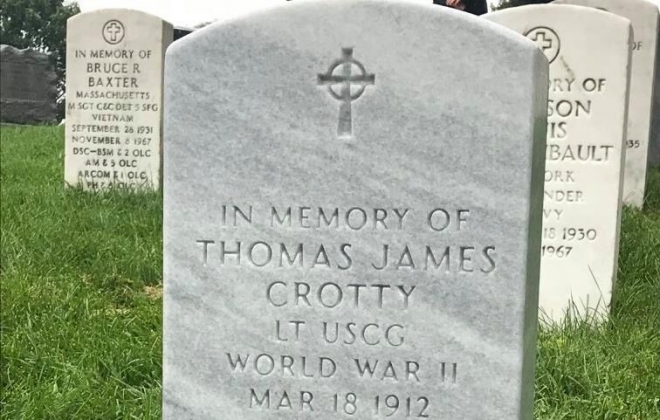 “He would sit there at night and be thinking,” she said of her dad, and she knew his youngest brother was on his mind.

Jimmy’s remains are expected to be flown into the Niagara Falls Air Reserve Station next Friday. A memorial Mass will be offered Saturday at St. Thomas Aquinas Church, followed by burial in a family plot, with full military honors, at Lackawanna's Holy Cross Cemetery.

To Michael Kelly, it is the final step in a process he helped begin more than a decade ago. Michael's time with his grandfather convinced him that Jimmy Crotty ought to be prominently remembered. Michael and his uncle Pat spoke to Coast Guard officers, who erected a plaque in his honor at the Buffalo & Erie County Naval and Military Park and also helped the family receive a complete set of Jimmy's medals.

While Jimmy has a marker at Arlington National Cemetery that went up in 2017, his family wants his grave close to Buffalo. More than 77 years after his death in a faraway camp, Sunday's Buffalo News will finally carry his formal obituary, and the Crottys will gather next weekend to say farewell.

Michael Kelly, for his part, will think about a quiet back room in South Buffalo and a guy who kept his little brother’s photos on the wall.

“The only thing that could make this better,” Michael said, “is if my grandfather could be here to see it.”