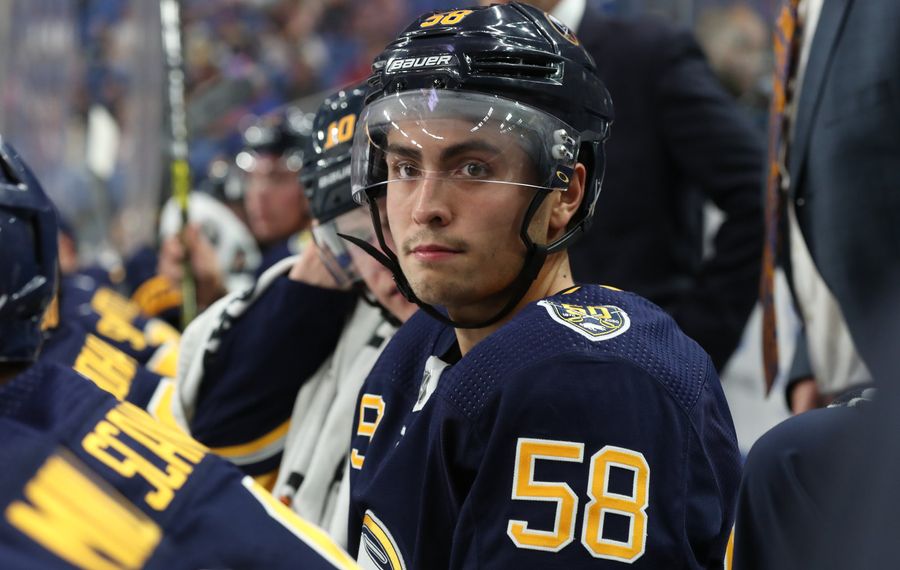 John Gilmour's 11-game wait ended Friday night in Detroit. There was no rust in his game whatsoever. It was as if Gilmour was back in the preseason, freely skating the puck up ice and getting it out of his zone.

If Gilmour is the Buffalo Sabres' seventh defenseman, they've quickly developed some strong depth on the back end.

"I felt confidence. I've been with this club day to day and I just felt really good," Gilmour said after making his Buffalo debut during the 2-0 win over the Red Wings in Little Caesars Arena. "I was confident jumping in."

The Sabres used the same six defenders in going 8-2-1 to open the season, so Gilmour was relegated to extra work after practice and to taking morning skates, when most of his teammates now skip them.

He finally got in Friday in place of Marco Scandella, who missed the game with a lower-body injury. The Sabres said Scandella is day to day so it's uncertain if Gilmour will return to the press box or stay in the lineup for Monday's visit by the Arizona Coyotes to KeyBank Center.

Gilmour played 17:28 Friday while paired with Colin Miller. He had three shot attempts, two on goal, and a 53% Corsi rating at 5-on-5. There were no spectacular plays, no hideous gaffes. It would be easy to say it was a good thing that his game was not noticeable.

But that wasn't really the case. Coach Ralph Krueger brought up Gilmour's play unprompted during his postgame meeting with reporters.

"Often the players without points go lost and missing," Krueger said. "But if you look at Johnny Gilmour coming in after multiple weeks of not playing and playing at that level and that pace, we're really happy with the 'D' group today."

With Scandella out, the Sabres seized the opportunity to shuffle their defense pairs some in the wake of Thursday's 6-2 loss in New York, which saw Miller and Rasmus Dahlin struggle mightily. Dahlin was minus-3 in that game for just the third time in his NHL career.

Dahlin took Scandella's spot alongside Henri Jokiharju and, after one rough turnover in the first period, had a strong bounce-back game. He posted a 61% Corsi rating while playing 18:25.

Krueger used the term "world class" to describe the work of his first pair. Rasmus Ristolainen played 26:01 with five hits and three blocks while Jake McCabe played 18:15 and scored Buffalo's first goal after missing 10 minutes of the first period to get stitches in his chin and above his eye.

Gilmour, meanwhile, isn't taking his NHL time for granted. After all, the New York Rangers gave him only five games last year even though he had scored 20 goals and was an AHL All-Star at Hartford.

"When the team is doing so well, it still feels good even if I'm not in the lineup," he said. "I'm still rooting for the squad. We're real hot and that's good.

"It's been a great experience, learning every day being around such high-caliber people. I"m just growing with it and having a lot of fun with it at the same time."

Linus Ullmark made 41 saves to earn the shutout Friday. It was Buffalo's third shutout of the season in 12 games – already one more than it had all of last season.

The Sabres were off Saturday and will return to practice Sunday morning. Defenseman Will Borgen, who joined the team in Detroit as an extra in case of an injury in the pregame warmups, was returned to Rochester Saturday so he could play in the Amerks' game Saturday night at Syracuse.