Early voting will be more convenient in Erie County than just about anywhere else in New York State this year.

That’s because local officials will open twice as many early voting sites here than there will be in any of the other 61 counties.

For the first time New Yorkers can vote early across the state, beginning Saturday.

More early voting polling sites will mean bigger bills to pay, including the cost of staffing all the sites for nine days and buying new equipment. But Erie County will get $2.1 million from the state, which officials say will cover the costs for early voting.

“We looked at the number that was required by the law, and it would leave large sections of the county not being able to participate in early voting,” said Ralph Mohr, Erie County’s Republican elections commissioner. “So we didn’t want to do that.”

The new law requires counties to operate one early voting site for every 50,000 residents. The number that’s required of any county is capped at seven, but counties may add more.

Although Erie County was required to have only seven sites, its elections commissioners decided to have 37 – one in each town and one in each Common Council district in Buffalo, plus one at the Board of Elections downtown.

That’s an average of four times as many polling sites on a per capita basis, based on the number of voters, than all but five very small counties in the state.

The sites in Erie County will also be open for a total of 69 hours – nine hours more than state law requires.

How early voting will work

Early voting sites across the state will be open from Saturday, Oct. 26 to Sunday, Nov. 3.

Early voting will introduce a few significant changes this year along with the nine additional days to vote.

Until now, local voters have had to report to their assigned polling place. (And this year, on Election Day, residents will still need to go to their designated polling place.) During early voting, though, voters will be able to go to any polling place in their county, if they live in Erie or Niagara counties.

The two counties were among 18 counties in the state who opted to give voters the ability to cast ballots at any polling place in their county.

That makes voting more convenient for residents but introduces the logistical challenge of ensuring that people aren’t voting in multiple places or on multiple days. So Erie County, along with some other counties, will be using electronic polling books during early voting.

They are tablets similar to iPads that are linked into a live central database. Instead of signing in to vote in one of the big paper voting books, voters will now use a stylus to sign their name on a tablet.

As soon as someone votes, the Board of Elections’ database is updated and poll workers at every location will be able to see that that person has already cast a ballot.

Because people can vote at any early voting site, the Board of Elections bought printers that will be able to print a ballot for any town or district in the county.

“If you’re a resident of Lancaster, it will print you a Lancaster ballot no matter where you vote in the county,” Mohr said.

The state is reimbursing counties for much of those initial capital costs for early voting, as well as much of the cost of paying poll workers. Local governments are covering the remainder.

In total, the state is reimbursing counties $24 million for early voting this year. That money will be dispersed based on voter enrollment and the number of polling sites in each county. 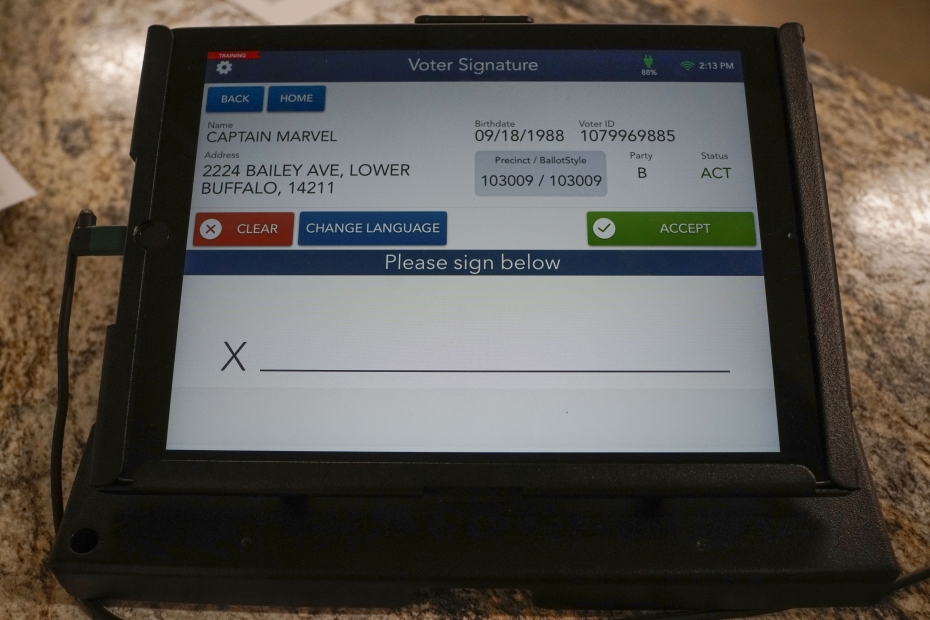 Election inspectors will use this tablet system to sign in voters at polls for early voting. The system will enable county boards of elections to determine if a voter has already voted and prevent a voter from voting twice. (Derek Gee/Buffalo News)

Early voting has proven to be popular throughout much of the country. Thirty-eight other states already have implemented it. And a majority of voters last year opted to cast their ballots early, rather than waiting until Election Day, in six of those states: Arkansas, Nevada, New Mexico, North Carolina, Tennessee and Texas.

But does early voting increase turnout?

Early voting by itself does not increase turnout in the long term, most studies have found. Some studies have even found that it decreases turnout, with the theory being that it dampens the traditional hype around Election Day.

What can increase voter turnout, though, is increasing the number of polling places that are open during early voting, according to Elliott B. Fullmer, a political scientist who has analyzed early voting in every midterm and presidential election since 2008.

“In general, early voting site density does predict more turnout, but the effects are somewhat modest,” said Fullmer, an associate professor at Randolph-Macon College in Ashland, Va. “While they can make a meaningful difference, early voting sites alone cannot solve the problem of low turnout in U.S. elections.”

The policy that the most studies have found to increase voter turnout: same-day registration, according to the U.S. Government Accountability Office. New York is not among the 21 states where people can register to vote on Election Day. Here, residents must have registered by Oct. 11 to be eligible to vote in the Nov. 5 general election.

Last year, New York's voter turnout was the ninth-lowest in the country at 45.2%, compared with a national turnout of 50.3%.

Get answers to questions about early voting