On Friday, dozens of construction workers crawled over 24 acres in a Town of Tonawanda industrial park, preparing to pour foundations and install structural supports for a $25 million warehouse and distribution center.

By the end of 2020, hundreds of part- and full-time workers should fill Amazon's 117,000-square-foot delivery station, where packages will arrive, get sorted into delivery routes and loaded onto vans for the final leg of their journey from shelf to customer.

It's the latest investment by the global online retailer in the Buffalo Niagara region, where Amazon operates a large sorting center in Lancaster and a Whole Foods Market in Amherst.

The town approved the development over the summer under the code name "Project Bruno," but The Buffalo News in May reported the prospective tenant at TM Montante's Riverview Solar Technology Park was Amazon. Thursday brought the first official confirmation it's an Amazon delivery station.

"They're just adding these like wildfire right now," said Marc Wulfraat, president of MWPVL International Inc., a distribution consulting firm based in Montreal.

Officials from Montante and Invest Buffalo Niagara say it's another sign the area can successfully compete to win investment from major international companies and a stamp of approval for Montante's growing Tonawanda industrial park. In fact, Amazon isn't expected to seek tax breaks for the project, a top local economic development official said. 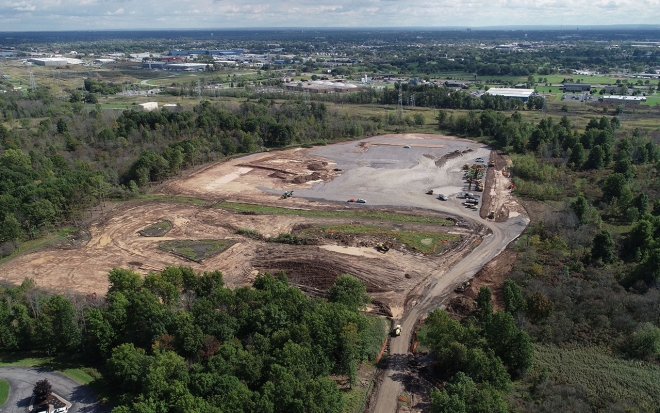 An overview of what is now known to be the Amazon site as seen Sept. 24. (Derek Gee/Buffalo News)

Labor leaders say they support anyone bringing new jobs to the area but they noted Amazon's anti-union track record and its reputation for creating a difficult work environment. Further, many positions connected to this facility are contract delivery jobs.

Industry experts say it's tied to Amazon's effort to expand next-day delivery service to more of its customers, and this region may get another such delivery station in the future. Amazon also apparently is eyeing the Syracuse and Albany markets for further growth.

Amazon customers, especially its Prime members, benefit from faster delivery of the items they order from the company. But this puts more pressure on brick-and-mortar retailers to keep up.

“Customers love the transition of Prime from two days to one day — they’ve already ordered billions of items with free one-day delivery this year," Amazon founder Jeff Bezos said in a statement Thursday as the company announced its latest earnings. "It’s a big investment, and it’s the right long-term decision for customers."

Amazon in the spring reached out to Invest Buffalo Niagara and to commercial property owners in the area to help in its search for a potential new location here.

Christian Campos, president of TM Montante Development, said Amazon needed a shovel-ready site because of its aggressive timeline to get the project open by the end of next year. Alan Rosenhoch, Invest Buffalo Niagara's director of business development, said most of Amazon's delivery stations are retrofits of existing buildings.

"Riverview Solar Park we feel is really well-positioned for this type of company," Campos said, noting Montante's good working relationship with town leaders and the site's location between Niagara Falls and Buffalo near the I-190. 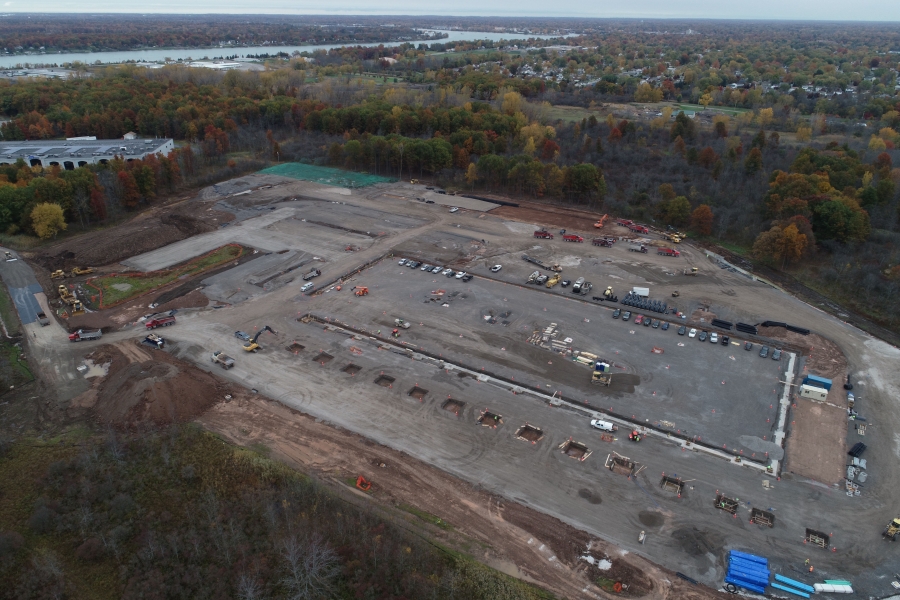 The progress made on the Amazon site as of Oct. 25. (Derek Gee/Buffalo News)

Officials from Montante and Invest Buffalo Niagara were sworn to secrecy by Amazon during the site-selection and approval process. The application to the Town of Tonawanda's Planning Board on behalf of a "Fortune 100" company referred to the development as "Project Bruno."

Amazon declined to comment on its plans before Thursday, when it finally confirmed its role in the project. Amazon intends to purchase the property from Montante.

Rosenhoch said the company indicated it would not seek any tax breaks. Amazon did not pursue incentives for its sortation facility in Lancaster, either.

Crews cleared and graded the vacant, wooded property and laid down thousands of tons of stone as fill.

Workers now are digging holes where the structural supports and a water collection system will go and are getting ready to put down the building foundation.

Wheeler said they hope to have the building shell finished by the end of the year and the roof in place in early 2020. 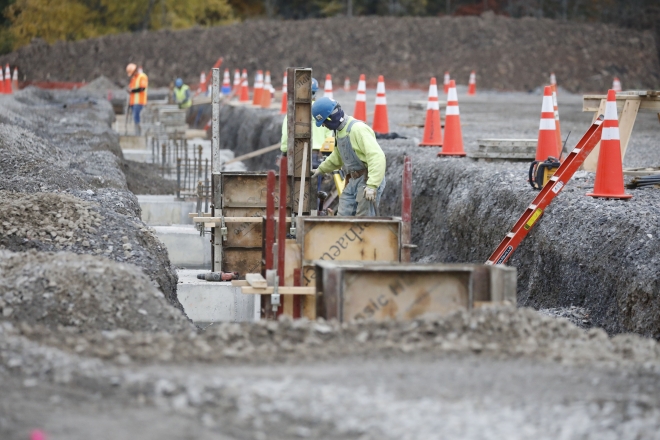 Amazon isn't just looking at the Buffalo area to expand. A developer working on behalf of the online retailer recently broke ground on a 1 million-square-foot distribution center outside Albany. And Amazon is rumored to be the tenant behind a massive, 3.7 million-square-foot facility proposed for a former golf course in a Syracuse suburb.

The Buffalo News in May also reported Amazon is interested in a larger, 100-plus acre property on Grand Island. but the company isn't close to deciding whether to build on the island, sources told The News.

Amazon had 70 delivery stations at the end of 2017 and has 152 now, with 10 more including the one in Tonawanda underway, said Wulfraat, the industry consultant.

Orders start at the company's fulfillment centers, where employees pick items off the shelves and pack them into boxes for shipping to large regional sorting centers, like the one in Lancaster that serves a good portion of Upstate New York.

Most packages there are organized by ZIP code for delivery through the Post Office, or by UPS. But Amazon in recent years has bulked up its network of delivery stations, where packages are reorganized for direct delivery by van in loads of up to 200 packages.

Amazon is building the delivery stations in well-populated areas, and based on its size the Buffalo market could get another station. Fleets of vans, most operated by private contractors working exclusively for the company as part of its Amazon Flex program, handle the challenging, costly last mile of delivery to the customer's door, Wulfraat said.

This is a boon for Prime members – about 51% of American households have a membership – as more and more Amazon products are available for free one-day shipping, said Charles Lindsey, a marketing professor at the University at Buffalo.

It also forces Walmart, Target and other retailers big and small to step up their delivery game.

"It's really all about, nowadays, convenience and quick delivery," Lindsey said, and Amazon has a competitive advantage with its logistics experience.

But critics say local retailers can't compete with the online giant and the company's wealth hasn't trickled down to its employees.

The company raised its starting wage to $15 per hour last year but stories abound of warehouse employees working under significant stress and unpleasant conditions, with no union protections.

The problem includes Uber, Lyft and other companies in the "gig economy" that are eroding stable, full-time jobs that pay a living wage, said Richard Lipsitz, president of the Western New York Area Labor Federation.

"If it wasn't Amazon, it's some other company," Lipsitz said.

In the end, is Amazon's growth good news for the Buffalo Niagara region?

"We look at it as how do we position the Buffalo Niagara region to capture as much economic impact and opportunities for people to have new jobs to grow our tax base?" Invest Buffalo Niagara's Rosenhoch said. "And in that case, with this project today, that's accomplishing both of those."