The memories are still vivid in Yousif Kowa's mind.

The sun would slowly set on the ragged soccer field at Front Park, where his dad would break down the parts of his game that could be corrected from that day's performance, whether it was with Hutch-Tech, Global Premier Soccer or the Western New York Flash Academy.

Sometimes the training – just a few blocks from their Seventh Street home – felt like nitpicking, especially after an arduous game. But Yousif grew to appreciate the father-son bonding time. It was a chance to cherish a shared love for the sport of football and the family bond.

After all, Mohammad Kowa had given his family – his wife, Asmhane Kafe, and eventually his four children, including Yousif – new hope in moving from the unrest in Sudan to Buffalo.

Those warm evenings linger in Kowa's mind, even after the sting of his father's death just three weeks ago.

Yousif Kowa didn't know why his father was in and out of the hospital. It was late July 2019, days before Yousif would begin preseason before his freshman year at Niagara University.

He had a lot on his own plate: moving from Buffalo, where he was born, to a dorm in Niagara Falls; adjusting to a new, competitive environment; and enduring the physical rigors of camp.

Kowa was decently prepared for the transition, at least from a footballing standpoint. Yousif had starred as a senior at Hutch Tech, earning All-D'Youville Cup honors and then improving immensely, under the tutelage of Flash Academy coach Regan Steele, against top competition in the Elite Clubs National League. 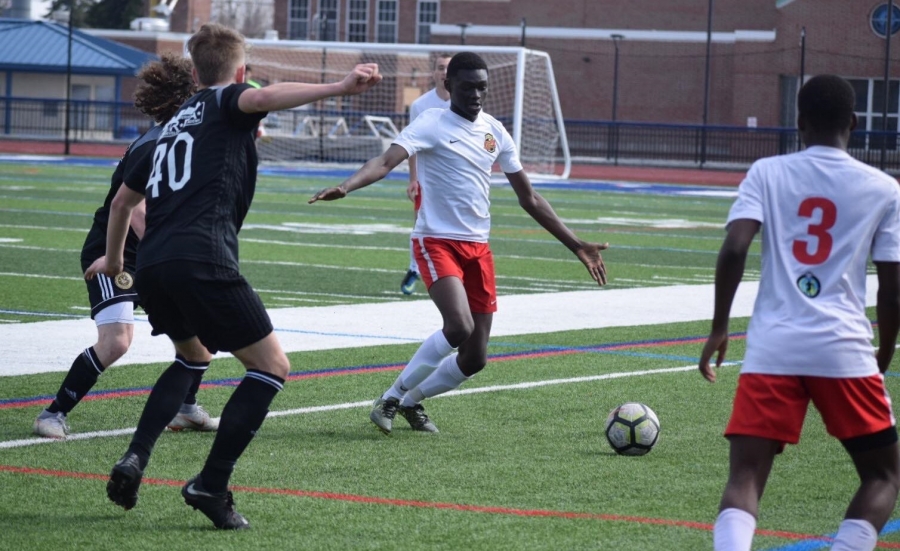 Yousif Kowa, with the ball, played one year for the WNY Flash Academy. (via Brittany Heist)

When an Italian center back Niagara recruited wound up not coming to campus, there was an opening for Yousif – a strong, 6-foot-2 athlete – to start against Syracuse in the preseason. The raw freshman held his own against high-level Division I competition, but surprisingly approached head coach Bill Boyle after the match, asking to be excused from a team event in order to see his father in the hospital.

The question caught Boyle by surprise. When Yousif and Mohammad had visited during the spring, the elder Kowa appeared healthy and energetic to the Niagara head coach, as if nothing was wrong.

As preseason matches turned into regular season games, though, Mohammad's condition worsened. But Yousif continued to downplay the severity, at least publicly. The Hutch Tech alum traveled with the Purple Eagles to Michigan, playing a full 90 minutes against Detroit Mercy, a 2-0 loss on Aug. 30, then saw 41 minutes a few days later against Western Michigan.

After the team returned to Niagara Falls, though, Yousif asked to be excused more frequently. He still traveled with the team for a clash against Dartmouth on Sept. 21, but his head wasn't right. Boyle remembers seeing him sitting alone by the pool of a fancy hotel in New Hampshire, visibly hurting. 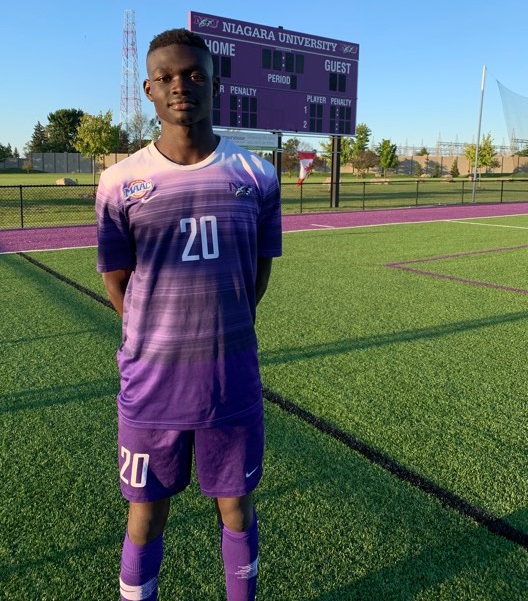 Yousif Kowa, pictured at an early season match for Niagara. (via Brittany Heist)

Considering even he didn't know the severity or even why his father was in the hospital initially, it was clear Mohammad "didn't want people to know." That made the doctors' diagnosis – late-stage pancreatic cancer – even more stunning.

Mohammad's entire family was present for the end. Yousif spent several nights sleeping in chairs by his father's bed at the Buffalo General ICU. His sister, a student at Akron University, took time off from school to be by her father's side. Both of Yousif's younger brothers live and attend school in Buffalo.

In his final days, the cancer had spread to the point where Mohammad could not speak. Boyle and his staff visited the hospital to check in on Mohammad; it was a stark contrast from when the coach had seen him in the spring. Thankfully for Yousif, he'd been able to have a conversation with his father days prior – even if all parties knew the future was grave.

Mohammad Kowa died on Oct. 2. Yousif clung to the father-son memories, which could in a way revive Mohammad and help the freshman persevere through difficult moments.

"He told me that he would never die," Yousif remembers.

An especially difficult day for Kowa was his father's funeral, on Oct. 5. The feeling of loss sunk in sharply as he watched the casket lowered into the ground.

Standing solemnly nearby were Niagara teammates Josh Tufino, Mick Keilen, Luca Pacheco, Anton Mullen and Rich Francisco, among others who weren't part of the Purple Eagles team that traveled to New Jersey, where Niagara took on Monmouth.

While grateful for the support, Yousif naturally grappled with grief and the raw pain that accompanies the death of a family member. There was unexpected solace, however, on a social media platform often condemned for its superficiality.

"I saw it right when I opened Instagram," recollected Yousif, who saw the other 17 of his Niagara teammates holding up his No. 30 jersey after a 2-0 win. "It meant a lot to know the boys were there to support me. It was a really bad day ... but I could forget everything for a minute."

The caption, too, was meaningful.

"Special one today; family means a little extra in moments like these as we play with @yousif_kowa and his family in mind. Onward to victory!"

Big road win at Monmouth today and big week for the boys in MAAC play. Special one today; family means a little extra in moments like these as we play with @yousif_kowa and his family in mind. Onward to victory! 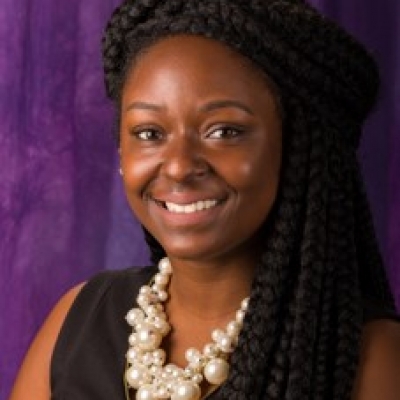 Kara Oliver, who works with NUOP students at Niagara University. (via Niagara)

While on campus, Kowa had met regularly with Kara Oliver, assistant director of NUOP, the Niagara University Opportunity Program that accepts students who are academically underprepared and economically disadvantaged. Kowa was recruited to the school as part of NUOP.

Oliver proved a valuable support system for Kowa; their weekly meetings kept him steady and focused even as his life became a blur, a whirlwind of busyness and grief.

Niagara Athletics' mental health counselor, Michelle Granieri, was a pivotal influence, too. With his second family of teammates, plus coaches Bill Boyle and Dave Hesch, Kowa found the strength to remain in school.

The university has been accommodating in other ways, too. The coaching staff filed for a hardship waiver that, should it be accepted, will grant him an extra year of eligibility. Kowa has been offered a soccer scholarship to offset a loan, which will help fund his year of school. As a tribute, the Niagara men will wear warm-ups with the initials "MK" – for Mohammad Kowa – written on the right arm.

The athletics department will donate proceeds from Youth Night, at 7 p.m. Saturday, Oct. 26, to the Kowa family. Free pizza and candy will be handed out to kids in costume.

For Boyle, these two months have been a window into Kowa's character. The fourth-year coach has considerable praise for Kowa's toughness and resilience; the Buffalo native hasn't become withdrawn, but rather quickly endeared himself to teammates.

"He's so respectful, he looks you in the eye, he listens, he takes in everything," Boyle said, rattling off Kowa's qualities. "He's humble and appreciative – he's doing things the right way." 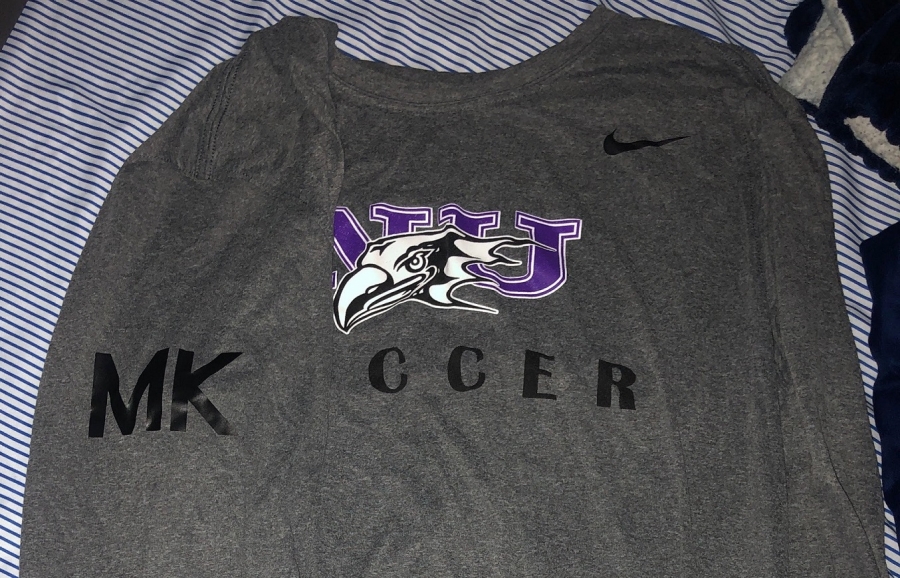 The Niagara men's soccer warm-up with Mohammad Kowa's initials on the sleeve. (via Niagara)

In truth, Kowa has a lot more to carry with him than those soccer memories from Buffalo. Culture, something hard to put in a box in terms of how it's expressed, remains firmly part of one's identity regardless.

The memories are a little faint, but Kowa remembers traveling with his dad to his native Sudan, a two or three-month trip when he was 5 years old. They saw Omdurman, Mohammad's former home, the second-largest city in the country, then Khartoum, the capital, where his mother was born. The poverty and living standard struck him – and stayed with him – as did the sense of gratitude the Sudanese felt for the necessities.

"The things that we don't value, they value a lot," Kowa said. "I learned that I should be thankful for what I have."

Mohammad, a devout Muslim, connected with African culture in other ways, finding meaning in Nubian traditions shared by the indigenous people group in Sudan.

In a 2002 Buffalo News article, Mohammad – in Buffalo for only two years at that point – talked to reporter Jay Rey about his acclimation to Buffalo, leaving one memorable quote on the climate: " 'People walk on ice?' Kowa would think to himself. 'I don't believe it.' "

The story mentions how the refugee, who worked as a police officer in Sudan before fleeing for refuge in Lebanon with his wife, was taking English classes during the day and working as a mechanic at night, hoping one day to attend college for mechanical engineering.

"In America, it's not easy," Mohammad told Rey. "You must be busy all the time. You must work hard."

Mohammad didn't abandon his African roots, even after starting a new life for his family. He traveled to other states for Nubian festivals, often dressing up and leading the culture's bull dance. In his early teens, Yousif would tag along, reading poems at the events simply as a way to participate in a tradition dear to his father. 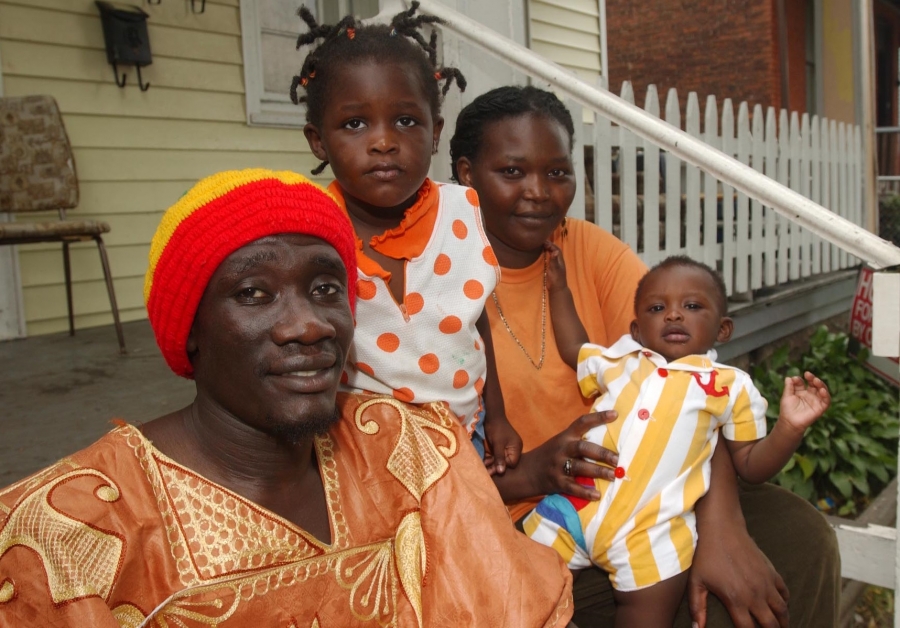 Mohammad Kowa, left, pictured in 2002. To his left, in order, are his daughter Paradise, his wife Asmhane and Yousif, who's 8 months old. The family moved to Buffalo in 1999. (News file photo)

Yousif and his sister are the first two college students from the Kowa family, a point of pride and additional motivation for the Niagara freshman.

Even though his father won't be there to see Yousif graduate, he'll know how proud Mohammad would have been. As the oldest male in a Muslim family, Yousif will shoulder a lot of responsibility in the future, but his father was a pillar of strength, a role model.

"He was the strongest man I knew," Yousif said. "I never saw him make a big mistake. He was charismatic, courageous and wise."

For now, though, Yousif won't take anything for granted.

"I'm blessed to be here," he says. "I'm anxious for what the future holds."