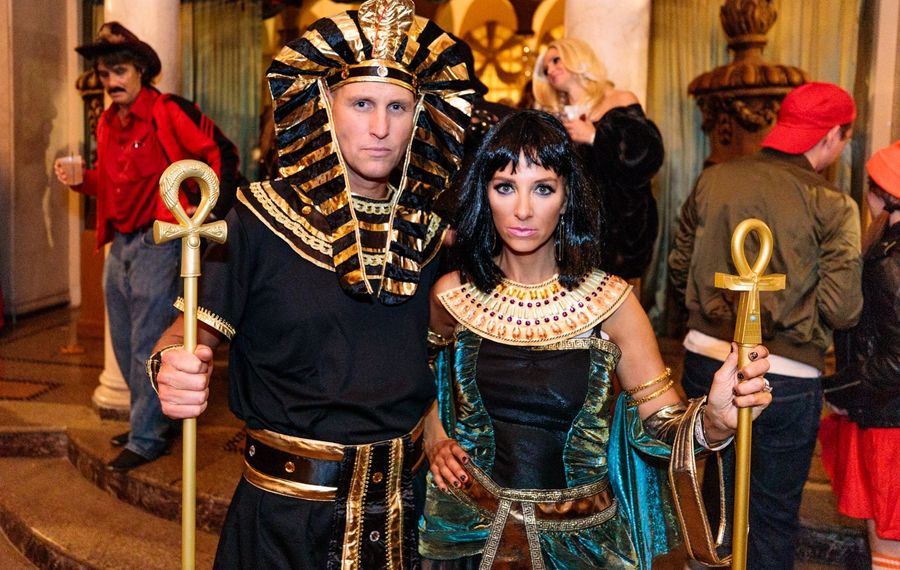 Buffalo's Biggest Halloween Bash set the mood for spooky season, serving as a fantastic source for costume ideas and reminding how creepy/bizarre this tradition can be. We're only getting started.

The schedule hits full bore this weekend, with a bevy of annual Halloween events - from ultra creepy to ultra heavy to ultra '90s - lined up for Buffalo-area haunts (get it?).

Whether you're a scantily-clad goblin or this awkward adult praying mantis, there's something for you.

The Witches Ball - presented by Buffalo Rising - spares no expense in its spookiness (and paradoxical event titles, apparently). Dubbed a "high-fashion horror event," the scene in the Statler weaves together more than 200 local artists and six stages of live music, including dance parties prompted by Nerds Gone Wild, XOXO Pop Band, DJ Crespo, Jillian Eliza, Leroy Townes and more (it could not be more of a musical melting pot).

Also be on the lookout for burlesque dancers, magicians, stilt walkers and all sorts of characters that fit the occasion. The VIP, while pricey, is heavy on exclusives, features four hours of open bar, a carving station (not sure what's being carved) and an exceptional overlook of the party, just exquisite for Insta.

Instead of following the spooky, creepy trend, local brand-builder/publisher Rise Collaborative continues its '90s-themed tradition - this time in a new venue, at the sizable space on Chandler Street that houses both Thin Man and Tappo Pizza.

Admission includes open bar and pizza, live music by veteran performers Kurt & the Loders on one floor and Silent Disco on another, plus cash prizes for best costumes. Look back at Smiles from 2017, especially for costume ideas.

Doom N Boom is an apt name for this heavy-metal-meets-bassy-EDM party, presented by RiverWorks, After Dark and MNM Presents. The creepy factor is high, too; entertainers include Los Angeles-based Sullivan King - who takes being scary quite seriously, intentionally haunting Swarm, AC/DC and Metallica tribute bands, a Keith Buckley (ETID) DJ set, carnival rides such as a Ferris Wheel and bumper cars, as well as fire spinners and illusionists. It promises to be a spectacle.

And you thought Food Truck Tuesday was done! (Well, it is, for the season, but this is similar). This annual Halloween party brings famished freaks and grazing goblins to Larkinville for frightening fare.

Larkin Square brass just released the lineup of trucks - many of which will be decked out for the season - while rising local band Mom Said No. plays the heated boardwalk. Costumes are encouraged.

Halloween on Hertel, 11 a.m. to 1 p.m. Saturday, Oct. 26 along Hertel Avenue. Free to attend. Participating businesses on Hertel will be giving out candy to kids in costume.

Elmwood Village Trick-or-Treat, 1:30 to 3 p.m. Sunday, Oct. 27 in the Elmwood Village. Free to attend, geared toward ages 10 and younger. Indoor activities in the Lafayette Presbyterian Church.

Halloween Masquerade, 7 to 11 p.m. Friday, Oct. 25 at Hotel Henry (corner of Rockwell Road and Cleveland Circle). Tickets are $75 apiece in advance, will be available at the door, too.

The Bairs Foundation, a Buffalo-based not-for-profit that provides financial assistance to plaintiffs for living or medical expenses during the litigation period, presents a Halloween masquerade at Hotel Henry - an elite venue for the season - on Friday night.

A three-hour premium open bar, food stations, a gourmet popcorn bar, live music and dancing led by Total Eclipse, and prizes for best mask and best costume are all on the agenda.

Crawling Dead: Step Out Buffalo's Halloween bar crawl, 7 p.m. Saturday, Oct. 26 on 17 bars and restaurants along Hertel Avenue. Cost is $10 in advance, $15 at the event.

Seventeen bars will take part in Step Out Boo-ffalo's annual Halloween Bar Crawl on Hertel Avenue, with the headquarters - where you snag a wristband and a map - at Mac's on Hertel.

Find deals for each participant - with presenting sponsor Southern Tier Brewing and its Pumking virtually everywhere - and remember that free slice of pizza from Bob & John's, between 8 and 11:45 p.m., awaits.

A Halloween costume contest at Mac's, a haunted photo booth and a shuttle that floats attendees up and down Hertel all night are also worth knowing. A portion of the proceeds benefits the Leukemia & Lymphoma Society.

Thriller in the Burg, event begins at 6 p.m., dance performances at 7 and 8 p.m. on Saturday, Oct. 26 in the Hamburg Community Playground parking lot (107 Prospect Ave.). Free to attend.

Spooky costumes are encouraged for the community hangout, which will feature the Coyote Cafe and Main Street Ice Cream food trucks. Kids dance contests and limbo challenges will run around the official performances.

Toss on a Halloween costume and enjoy the 3.1-mile jaunt or dash to a personal record at the seasonal race by YellowJacket Racing (Rochester) and Fleet Feet. Cash prices for top finishers, post-race treats and pleasing endorphins are more reasons to take part. See the top finishers from last year's race.

Talk about a cool job: Windborne Music arranger-conductor Brent Havens tailors music from legendary classic rock bands - Led Zeppelin, the Who and the Doors, for example - to fit orchestral accompaniment. Think of it as a rock show with a classical bent.

The blended approach has been popular in Buffalo so far, and Friday's could be the biggest yet. Windborne vocalist Brody Dolyniuk tackles the challenge of mimicking Freddy Mercury - the unparalleled rangy voice of Queen - but he'll have the trusty Buffalo Philharmonic behind him in support.

Benny the Butcher, 7 to 11:30 p.m. Saturday, Oct. 26 at Showplace Theater (1065 Grant St.). Limited number of general admission tickets will be available at the door for $35. Online presale sold out.

Few rappers have experienced the rapid rise to prominence of Benny the Butcher, who's seen his own profile (143,000 Instagram followers) take off alongside Griselda Records, which also touts founder Westside Gunn and Conway. Benny, who headlined Beau Fleuve two years ago but has sold out venues across the country, is one of the first high-profile shows to grace Showplace Theater since its rebirth.

Benny's EP, "Statue of Limitations," released a week ago with Smoke DZA, peaked at No. 21 on the iTunes charts, trailed only G-Eazy, Gucci Mane and Post Malone in the hip-hop/rap category.

5 more events for this weekend

Note: The bar crawl above is presented by Student Body, a Rochester-based brand that organizes regional bar crawls.