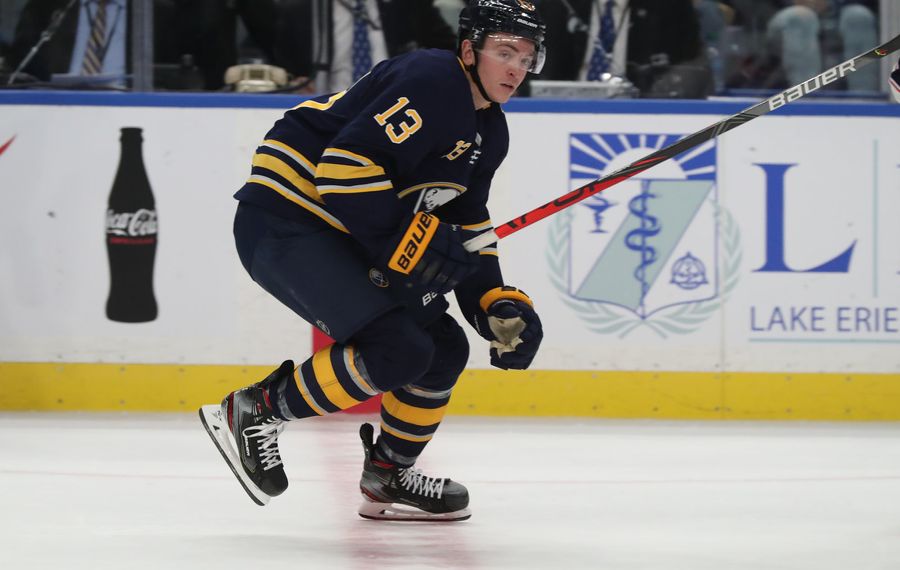 NEW YORK -- Jimmy Vesey has spent the last two days back in the Big Apple. The Sabres winger is comfortable here after playing the last three seasons for the New York Rangers and is getting more comfortable with his new team, even though he entered Thursday without a goal in the first 10 games.

"Even for the last 4-5 games, I've felt better and better," Vesey said prior to the game in Madison Square Garden. "It feels like our line is starting to click. It seems like in California and on Tuesday (at home against San Jose), we're in the offensive zone every time we're out there. It's good for me to hold on to some pucks and make some plays. I feel like I'm knocking on the door to get one to go in for me."

As Vesey said, he had assists in two of the three games out West, had three shots on goal in the opener at Anaheim and also had three in Tuesday's game.

Buffalo coach Ralph Krueger gave it up to Vesey by putting him on the ice for the opening faceoff Thursday against his old team with Jack Eichel and Sam Reinhart. Vesey had an uneventful 37-second shift and then returned to his normal line with Casey Mittelstadt and Conor Sheary.

"We know Jimmy would like to be producing more but we're not upset with him in any way, shape or form," Krueger said. "We like the way he's come in here, taken on his role and become an important penalty killer for us. ... He's working hard in both directions and we like the way he's embraced that style of play and the offense is going to come."

"It was good to see those guys. I was close with them and obviously we're all excited for this game," Vesey said. "It's all a little weird. I've never entered the building this way. Couldn't find where the sticks were. Everything is a little different but it's always good to be back in New York. You have to look at it as just another game once you get past the first couple of shifts."

Vesey said he's noted how Mittelstadt has kicked some offense into his game in recent starts and hopes he can follow the same plan. Krueger said putting a player on a special teams role even when he's not producing offensively is a way a coach can kick-start some confidence.

"It's good for the mindset," Krueger said. "He's definitely somebody that can help our power play too if need be. We had him there a lot in preseason and know what we can do."

"It's a lot of fun," Vesey said of his PK work. "I got a chance to be on it last year and this year I'm getting more time. It's a real challenge that's fun and a big part of today's game. (Vladimir Sobotka) and I are still figuring out reads off each other since we're not together 5-on-5 but we've been good so far."

Rangers winger Kaapo Kakko, the No. 2 overall pick in the June draft, got a chance on his team's top line for the first time this season Thursday night playing with Chris Kreider and center Mika Zibanejad.

Kakko entered the game with just one goal and one assist and told a Finnish reporter here Sunday he's disturbed by his start. He's averaging just over 14 1/2 minutes per game and played only 9:31 on Tuesday in an overtime loss to Arizona.

“Hockey isn’t very much fun for me right now,” Kakko told Eastside Media. “Things haven’t been working out, and sometimes I feel like I could be on the ice a bit more. It would be cool to get a chance on the first line at some point. I understand that it hasn’t been realistic so far, since I haven’t really showed much.”

Kakko doubled down on that interview in English with reporters here Wednesday.

"I’m playing bad hockey. Of course [it’s not fun] because we are not winning the games right now,” he said. “But, hopefully it’s getting better. Like, next game, maybe I feel better.”

What's it like for the Rangers coach David Quinn to see his former Boston University star Jack Eichel continue on the road to stardom with the Sabres? "I won't like it tonight," said a smiling Quinn. "Listen, I'm not surprised. This is a guy who's got world-class talent and a world-class work ethic. He's off to an incredible start."