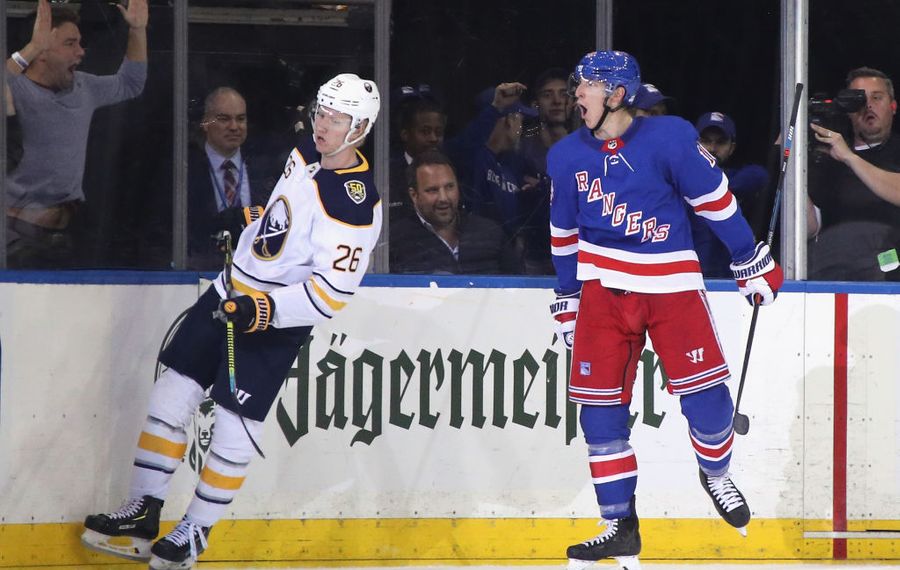 NEW YORK -- Start spreadin' the news: Duds happen to every NHL team over the course of an 82-game season. Did you forget that in the midst of the joyride that was the Buffalo Sabres' 8-1-1 start?

The Sabres took some cold water to the face Thursday night in a 6-2 loss to the New York Rangers in Madison Square Garden. It wasn't a standard blowout by any means as Buffalo outshot the Rangers, 33-24, and had 27 more shot attempts in the game.

But the Sabres made some big mistakes with the puck that turned into goals and couldn't convert on many good chances. The Rangers took the ice with a 2-4-1 record and on a five-game losing streak, but they took it to a Buffalo team that entered the night atop the NHL's overall standing. It was 3-0 after one period and the Sabres never caught up.

"It was a very strange game," said coach Ralph Krueger. "First of all, we put ourselves in the hole for sure with the puck management or lack of. But there were so many moments where you felt you were getting back into it."

It was a particularly tough night for Rasmus Dahlin, who was on the ice for four New York goals and posted a minus-3 rating for just the third time in his 93-game career over the last two seasons.

Dahlin got pickpocketed in the neutral zone by Artemi Panarin in the first period and the Rangers' big-ticket free agent evaded a Carter Hutton pokecheck and calmly slid the puck into an empty net to give New York a 1-0 lead it would not relinquish. On New York's second goal, Dahlin couldn't block a pass across the crease to Brett Howden, who got an easy tap-in on Hutton.

"I got the puck a little far from my body and I should just play it easy," Dahlin said of the Panarin goal. "I tried to make a pass, but it didn't work and they scored. That's a learning (thing) for me."

"I thought he was going to have a little more pressure so I got aggressive with a pokecheck and Panarin made me look pretty silly on that one," Hutton said. "But that's what good players do. They take advantage of mistakes."

As a 33-year-old veteran, Hutton could only smile sheepishly when asked about Panarin's poise with the puck. Hutton isn't the first goalie to get toasted by the $81.5 million player nicknamed "The Bread Man."

"I think my stick is a lot slower than an NHL defenseman's and he walks around and makes me look pretty silly," Hutton said. "It's one of those ones you live and die by it. I live by my reads and he made me pay."

Dahlin has 10 points in 11 games but is now minus-2 on the season. His sophomore year has seen more prominent struggles with the puck in the defensive zone at times than during his rookie season.

So Dahlin said he was quite happy the Sabres have a game Friday in Detroit, rather than having to sit on this effort for a few days.

"Obviously I didn't have my best game today but I have to refocus for tomorrow too," he said. "Stuff happens on the ice and you can't think about it too much. ... I'm learning every day. I've got a lot to improve in the D-zone. I'm working on it, so hopefully it can get better for tomorrow."

Dahlin, of course, was hardly the only player to endure a faux pas in this one.

Casey Mittelstadt didn't tie up Ryan Strome's stick and the Rangers center deflected home a point shot with 38 seconds left in the first period for New York's third goal. And Jack Eichel's blind back pass at the New York line was intercepted and Strome scored on the ensuing 2-on-1 to put the Rangers ahead, 5-2, midway through the third.

"I don't think it was a 6-2 game," Hutton said. "Quite a few breaks and bounces but we gave up a lot of East-West plays and they made us pay."

"The growth process doesn't change depending on a score of a game," Krueger said. "We are still making mistakes. We made mistakes in past games and we were able to find ways to win. Today, we just couldn't recover from the hole we dug ourselves into."