That our climate is warming is undeniable. 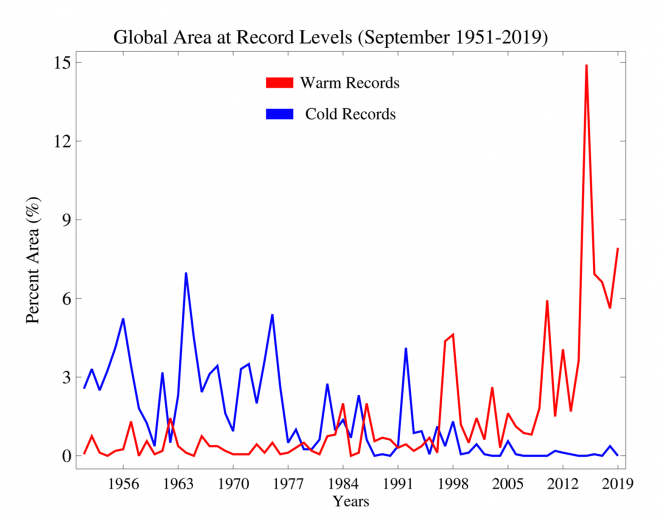 This graphic, a new product from a branch of NOAA, shows the percentage of the globe experiencing record-high temperatures compared to the percentage having record lows. The enormous disparities that have opened up in recent decades are firsthand evidence the climate change we speak of is essentially warming and is a mark of an unstable climate.

In a more stable climate, the ratio of record highs to record lows would be about 1:1, as was the case earlier in large parts of the 20th century. On Oct. 4, I wrote of the near certainty warming would not be occurring at this time in the earth’s history without human activity and that, indeed, the world would be cooling instead of warming.

The fact that there is a shrinking but still substantial number among the public who won’t even agree the world is warming is concerning. Let’s examine some more evidence.

From Climate.nasa.gov, a terrific site written by distinguished experts for laypeople, this graphic shows the increase in land-ocean temperatures index since 1880, with a clear acceleration in warming since around 1980:

Eighteen of the 19 warmest recorded years since 1880 have occurred since 2001.

On NASA's page, you can animate the next graphic time lapse below by clicking on the lower left arrow. The change to the warm color scale in recent decades is startling, with the greatest large-scale warming occurring at high latitudes, just as was forecast in climate models nearly 40 years ago.

We know the oceans have absorbed 80 to 90% of the excess warmth thus far, acting as what is called a “heat sink.” Ocean temperatures are constantly measured by instrumentation on buoys, other sensors and by satellite.

Ice mass loss from melting glaciers and icecaps on Greenland and Antarctica is adding to rising sea levels, and the ocean’s heating is also contributing to the rises because warmer water expands in volume. Until a few years ago, it was thought much of Antarctica’s accelerating peripheral ice mass loss was occurring due to ice calving. Now, it’s known the majority of increasing ice loss from this continent is due to warmer ocean waters melting ice underneath Antarctica’s outer ice cap.

These ice losses are not derived by eyeballing and approximations.

A large number of nations conducting Antarctic research are working together to compile precise measurements: 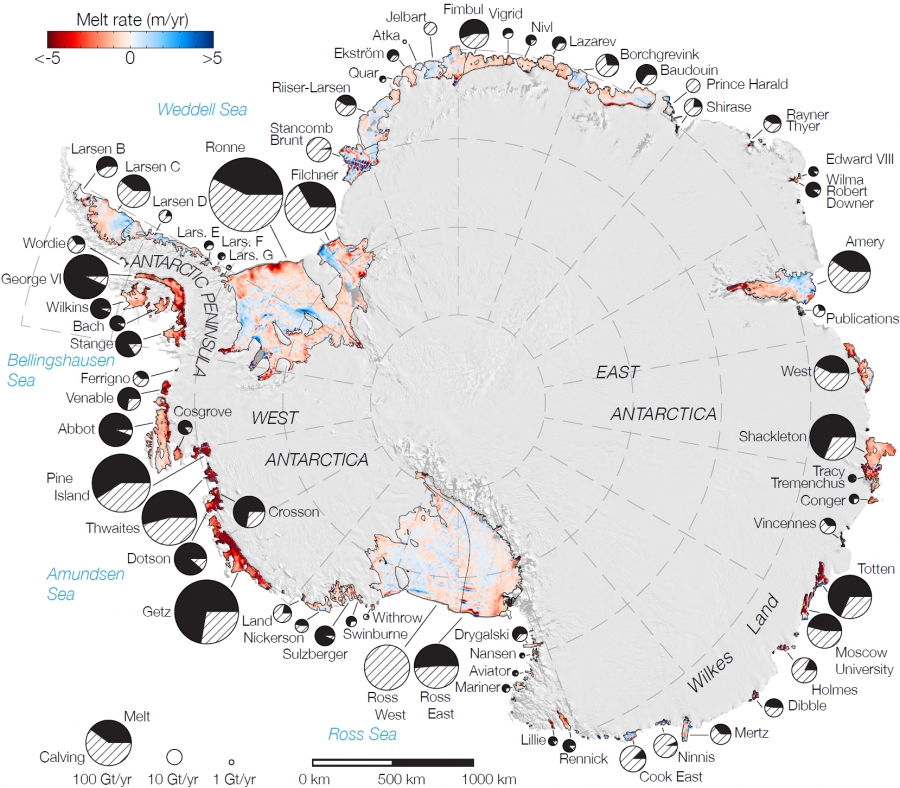 (NASA)Again, the evidence on ice mass loss on both Greenland and Antarctica is nothing short of proven and confirmed.
Similar efforts are undertaken on glacier fields around the globe.

I’ve written in past articles that sea level rises are not uniform around the globe. Some regions have greater rises and a few have smaller. The global mean sea level rise is, again, irrefutable.

For the most part, most of what I’ve written here is based on quality-controlled, peer-reviewed data. It pertains more to the existence of the effects from our mean warming climate, rather than a debate on the human activity issue that I touched upon only briefly.

For those hopefully few readers who refuse come to grips with the undeniable warming that is occurring — APART from social, economic and political connections with the causes underlying the warming — you may not realize you are not getting your information from reputable sources, if you actually believe warming is a hoax.

It is a hopeful development that more people are at least recognizing the warming and the threats posed by the acceleration of the warming. How much humanity can slow down and mitigate the worst effects of additional warming remains quite uncertain. But the majority of scientists in the relevant disciplines believe there is still time to make a meaningful pullback from the worst-case scenarios.

To start with, don’t expect a repeat performance of last Sunday’s perfect weather, which brought high temps in the mid-60s with abundant sunshine and light winds. This Sunday will be preceded by widespread showers moving in from the south Saturday night.

For tailgaters, wet conditions still appear likely in the morning, as seen here in the American GFS model (as well as in the European model.

The potentially better news in both the GFS and European models is that rainfall coverage would markedly decrease for the afternoon, as the depicted area of low pressure to the north would be moving out to the east.

If these current model trends hold, much of the afternoon could become rain-free, with slightly above-average temps closing in on 57-60. A fairly brisk southwest breeze during the wetter morning would veer to the west, then northwest, during the game and lighten up to 10-15 mph.