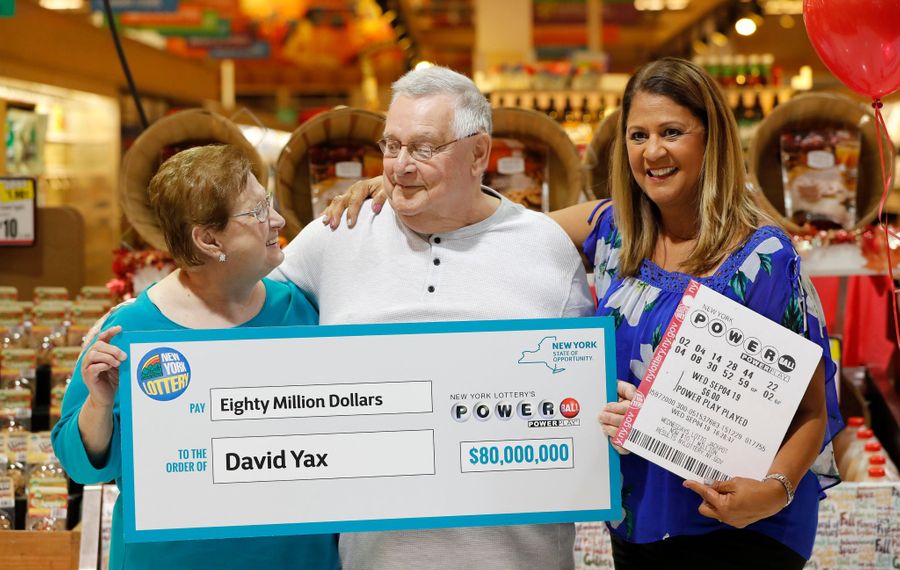 David Yax of North Evans went to bed Sept. 4, unaware that he was the winner of a Powerball jackpot drawing.

When restlessness awakened him hours later, he found out he was a winner.

But he still didn't know just how much of a winner he was.

"I had no idea how many people had won, or if I was the only one," he said Tuesday.

As it turned out, the 75-year-old, retired union carpenter is Erie County’s newest multimillionaire. He returned Tuesday to the same Tops Market on Erie Road in Derby where he brought his winning ticket, and was presented with an $80 million ceremonial prize check by New York Lottery spokeswoman Yolanda Vega as the sole winner from the Powerball drawing – the largest such prize in Western New York history, according to the New York Lottery.

After checking his numbers and learning that his life was about to change dramatically, Yax said he woke up his wife, Claudia, and told her the good news.

Before she fell asleep the night before, Claudia Yax said she had seen what she thought was a good sign.

Instead of collecting his winnings in installments over several years, Yax elected to receive a lump sum payout of $57.3 million, which is reduced by taxes to about $38.5 million, New York Lottery officials said.

In addition to using his newfound wealth on trips to Hawaii and Alaska, Yax said he plans to invest some of his winnings and, perhaps, splurge on a new woodworking shop or pole barn.

“Winning this amount of money is fantastic, but a little overwhelming," Yax said. "Our lives have changed 100%.”

Yax's winnings were nowhere near the biggest of all Powerball jackpots.The top five largest were all over $500 million each.

A Powerball prize – regardless of the amount won – may be claimed up to one year from the date of the drawing.

The winning Sept. 4 Powerball jackpot purchase marked the first in Western New York since the state joined the Multi-State Lottery Association in 2010, according to New York Lottery officials. The previous lottery jackpot record winner in Western New York was Joseph Cotton of Alden, who won a $33.3 million Lotto jackpot in 1991.

The Tops where Yax purchased his ticket will receive a $10,000 commission.