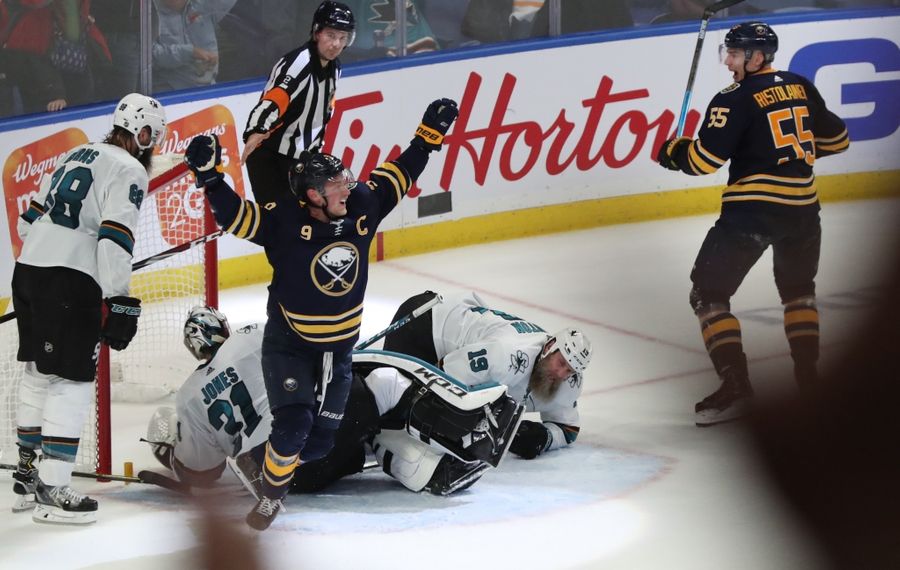 It was just two years ago when the Buffalo Sabres won only 11 home games all season. It equaled a franchise low and was the fewest by any NHL team since 2007. It was an embarrassment, an affront to the fans who have given their hearts -- and their dollars -- to this franchise.

It was the year of General Manager Jason Botterill's infamous press box door slam during an ugly matinee against Los Angeles, and the year of a 7-1 loss to Dallas during a similar Kids Day special. Suzy and Johnny weren't badgering Mommy and Daddy to bring them back.

But the kiddies and everyone else in the 716 might want to head downtown now because there's plenty of fun to be had at the rink.

Tuesday's 4-3 overtime thriller over San Jose was a wild slapstick affair filled with frustration and fun. No one experienced more emotion than captain Jack Eichel.

It was less than 20 seconds into the game when a turnover in the Sharks' zone gave Eichel the puck all alone in front of goaltender Martin Jones. He tried to pass. There was more of that in the second period with the Sabres in a 2-0 hole. The crowd was on Eichel, a rarity in his five seasons.

When he finally blew a one-timer past Jones at 7:21 of the second period, Eichel raised his arms and looked to the rafters. Relief.

"A little frustrated with myself more than anything," Eichel said before breaking into a smile. "I just thought I had a couple opportunities to shoot the puck. Obviously the fans were letting me know that I had a few opportunities to shoot the puck. You guys have watched me long enough. I've obviously passed up a lot of shots in my career trying to make plays. I just have to try to find that shooter's mentality a little bit more."

He does. But in the end, Eichel had eight shot attempts in the game with six on goal. He scored the overtime winner and finished with four points, giving him the NHL lead in scoring at home with 13 points (5-8) in five games this season. (He needs to get going on the road, where tougher matchups have left him with only one point in five games).

"I'm definitely enjoying playing at home in front of this crowd. It's been fun," Eichel said. "We use the home ice to our advantage. I definitely enjoy playing here. It's comfortable. You're able to get in your routine every day being in this rink and it's been a lot of fun so far."

There aren't enough people in the stands for this team's record but the season ticket base is clearly down and the scars of last year understandably run deep. And there's no doubt a good number of folks are saying, "I'll check in after Bills season."

The announced crowd of 15,876 marked the third time in five games the 16,000 figure wasn't cracked. There are wide swaths of empty seats in the 300 level and too many no-shows and/or no-buys in the prime seats. There's lots of room on the bandwagon but folks are properly skeptical.

Fair enough. The ones who have been coming have been terrific. The rink isn't a library like it's been far too often in this decade. There's a buzz, anticipation for big moments in a game and appreciation of plays that are made.

There's a lot to cheer for. The Sabres are entertaining. They press all over the ice. They can skate and, finally, they can actually pass the puck.

"We're trying to play that same style, no matter the building," said Sam Reinhart. "But it seems like all our lines can play the same way and when we are, the crowd certainly helps us out. That's been important to us from the start of the season to make this a difficult place."

When Eichel gets his game going, he's hard to stop. He's a quintessential power forward with the hands to match. Sure, he had two goals in this one, but my favorite play was the curl he made with the puck to get it across the blue line to Rasmus Ristolainen for the slapshot that Reinhart tipped home with 31 seconds left in the second period.

"He's a dominant player who can take over plays. That's why he is who he is," said Jeff Skinner, who banged home an Eichel feed 45 seconds into the third period to put the Sabres into a 3-2 lead. "He made some big plays in some big moments and did a great job tonight."

Because of the team's upcoming trip to Sweden, you've only got two chances to see the Sabres at home over the next three weeks. They come Monday against Arizona and Nov. 2 against the New York Islanders.

Botterill was musing about his home ice during an informal chit-chat with reporters Tuesday morning. You could see how happy the GM was when he was asked about how quickly his team is taking charge at home. Like it did during the 4-0 win eight days previously over Dallas, a far cry from the pounding his team took from the Stars here 21 months earlier.

"We were very excited about our home opener, just having the captains back, having the excitement in the building," Botterill recalled of the trouncing of New Jersey that kicked off the 50th anniversary season. "And now it’s up to us to keep that going. It’s something Ralph has talked a lot about, the results aren’t always going to be there but the effort has to be there.

"I must say I enjoyed our kids game against Dallas a little bit more last Monday and I thought that was a great game of our entire team playing well. ... We have to have an opportunity to capitalize on winning our games at home and I know our players feed off the energy from our fans and hopefully we’ll continue to give them that same effort."