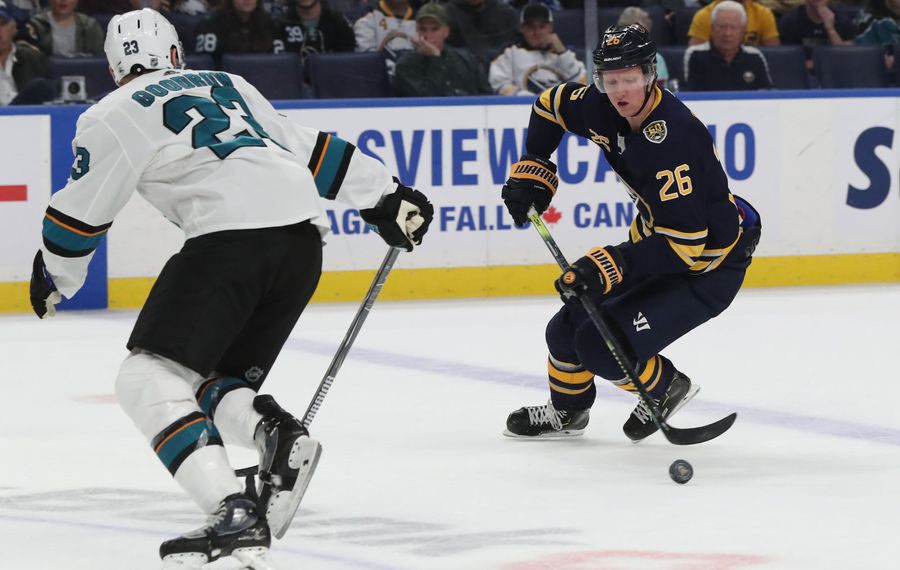 Rasmus Ristolainen did not know the game was over until the goal horn blew and the crowd roared inside KeyBank Center.

Ristolainen propped himself up from the ice and hugged Jack Eichel as the rest of the Buffalo Sabres converged to celebrate a 4-3 overtime win Tuesday night over the San Jose Sharks. Eichel, the Sabres' 22-year-old captain, scored two goals, including the game-winner 3:13 into overtime, and added two assists to give him 14 points through 10 games.

Eichel poking the puck across the goal line pushed the Sabres' record to 8-1-1, first in the National Hockey League with 17 points. The man standing beside Eichel, along with the rest of the Sabres' defensemen, has helped spark the impressive start under coach Ralph Krueger.

Ristolainen accounted for two of the four assists by Sabres defensemen -- including the tying goal and game-winner -- and helped prevent the type of high-danger scoring chances that plagued them last season.

"I really feel everyone doesn't to do anything wrong out there," Rasmus Dahlin, who has 10 points in 10 games this season, said of the Sabres' defensemen. "Everyone wants to do the right things for each other. We’re working really hard with video and stuff after games because last year wasn’t our best in the D-zone. All the guys who were here last year, we want to be solid in the D zone."

That wasn't the case for the entire game Tuesday night. There were a few notable breakdowns around their net, particularly early in the game. However, none of the six defensemen were directly responsible for a goal against.

Dylan Gambrell scored the game's opening goal by tipping a shot from Erik Karlsson and the Sharks pushed their lead to 2-0 at 15:23 into the first period when Marc-Edouard Vlasic snuck behind Vladimir Sobotka to one-time a cross-ice pass from Patrick Marleau.

After the Sabres roared back to take the lead, Karlsson tied the score, 3-3, with a shot from the right-wing circle that trickled between Carter Hutton's leg pads with 8:33 remaining in regulation.

Dahlin failed to clear the puck moments before Gambrell scored and Marco Scandella's turnover resulted in the Sharks' best scoring chance of the first period.

The Sabres weren't as sloppy with puck management during their two-goal second period. Dahlin, who quarterbacks the team's top power play from the point, set up Eichel's first goal with a pass across the high slot.

Additionally, the Sabres tied the score, 2-2, with 31 seconds left in the second period when Sam Reinhart deflected Ristolainen's shot from the right circle. Henri Jokiharju, a 20-year-old acquired from Chicago for Alexander Nylander in July, chipped the puck behind San Jose's net on a shift that resulted in Jeff Skinner's go-ahead goal 45 seconds into the third period.

"They're really stepping up and I thought they played an excellent game today," Krueger said of his defensemen. "I thought we were a little bit off on some of our defensive coverage, but the D solved a lot of things as we've always spoken about. You try to maintain that possession under all that pressure, and I think they've, more often than not, found solutions that get us going in the other direction with control."

Buffalo's defensemen illustrated the impact of Krueger's changes to their structure. Rather than being limited in a man-to-man scheme, the Sabres' defensemen are able to support one another along the wall in certain situations. Dahlin and Colin Miller battled for a puck to regain possession on a shift that resulted in a scoring chance for Jimmy Vesey.

Ristolainen and Jake McCabe also made a similar play in the third period, working together to regain possession on a shift that ended with a scoring chance for Skinner. The Sabres have a plus-14 goal differential and helped Hutton earn back-to-back shutouts last week, a goalless streak that lasted 134:22 over a span of four games.

"It’s easy to be confident when your record is what we have, but it started with camp," Ristolainen said. "Ralph brought the confidence. He brought a great game plan and system. That’s what we have played out there. We’re all on the same page and we’re seeing it’s working when we’re doing what the coaches say and we’re working hard both ways."

That game plan also has helped the Sabres' defensemen contributed offensively, combining for 29 points in 10 games. Miller created a scoring chance by skating with the puck behind the goal line and firing a centering pass to Sheary, though the attempt was cleared by a Sharks defender. McCabe also made an impressive backhanded pass between the circles to create a chance in the first period.

There are still growing pains, especially with Dahlin and Jokiharju. The latter took a tripping penalty in the second period after his blown defensive coverage nearly resulted in a Sharks goal. However, both responded with an outstanding overtime in which San Jose (3-5-1) barely possessed the puck.

"It is confidence," Scandella said. "We’re using each other, using our feet. Everyone is mobile out here and can make plays. We’re talking out there and making it easy on ourselves."

The group has benefited from continuity. Krueger has used the same defensemen and pairings for each of the first 10 games, allowing each group to develop chemistry in the new system. That's unlikely to last long, though.

Brandon Montour, who the Sabres acquired from Anaheim last February, is listed on the team's injury report as "week to week" with a hand injury. Additionally, General Manager Jason Botterill told the media Tuesday morning that Zach Bogosian has resumed skating following a setback in his recovery from hip surgery.

Though Bogosian is still listed as out "indefinitely," Montour's return would bump one of the Sabres' six defensemen out of the lineup, unless an injury occurs. That surplus has made the early-season rumor mill turn, as a number of teams around the National Hockey League are reportedly in search of help on the blue line.

Botterill doesn't seem eager to part with any of them, though.

"It’s a great problem that hopefully we have because there was talk a lot during the summer that we have too many defensemen," Botterill said. "You saw before games even started we ran into injury issues and I think as an organization we’re ecstatic about going over to Sweden. I think with so many Europeans on our team, the opportunity to be in front of family and friends over there, just being in that sort of environment for the league, we’re really excited about it. But it really condenses our schedule when we come back.

"That’s where we’re going to need all these defensemen. We’re happy the step some of our defensemen have taken, especially I think Henri on the back end has come in and played even beyond our expectations so far."