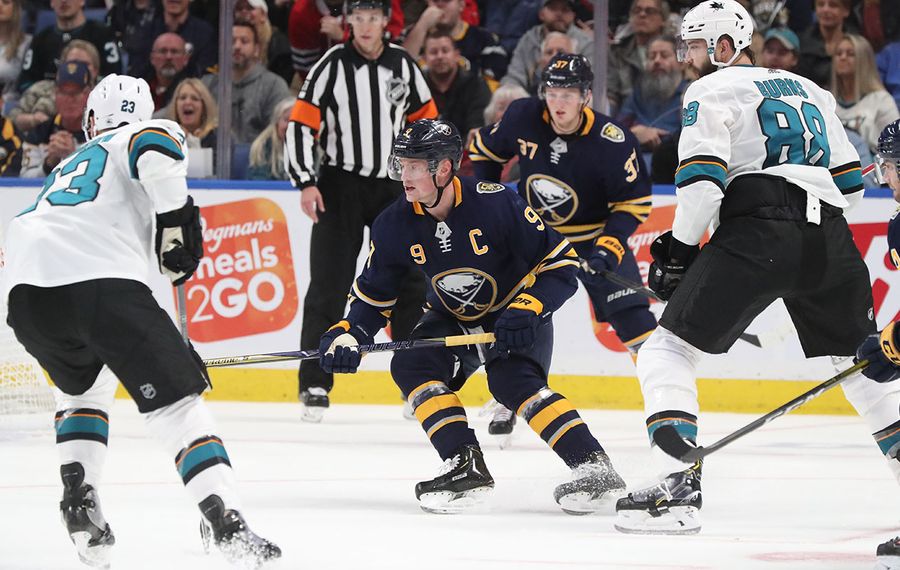 Jeff Skinner and Jack Eichel, separated at 5 on 5 by new coach Ralph Krueger, connected on the Buffalo Sabres' go-ahead goal 45 seconds into the third period to complete a two-goal rally, yet Skinner's sixth goal of the season was merely a footnote.

Eichel added the game-winning goal at 3:13 into overtime to send the Sabres to a 4-3 victory over the San Jose Sharks. Buffalo (8-1-1) has won three consecutive games and its 17 points are first in the National Hockey League. San Jose (3-5-1), meanwhile, blew a two-goal lead in the first period but tied the game when Erik Karlsson scored with 8:33 remaining in regulation.

Eichel had two goals among four points, Carter Hutton made 25 saves and Sam Reinhart also scored for the Sabres.

134:22: Hutton, who was named the NHL's third star of the week, managed to surpass his previous career-high shutout streak by not allowing a goal until 5:46 into the first period. The Sharks took a 1-0 lead when Karlsson's shot from the point was tipped by three players.

Dylan Gambrell touched the puck last to earn his first career goal. It was only the second game this season the Sabres did not score the first goal.

Backdoor: The Sabres only allowed two quality scoring chances in the first period, the first of which occurred when Marco Scandella turned the puck over in the defensive zone. San Jose scored on its second opportunity, a centering pass from Patrick Marleau to Marc-Edouard Vlasic, who beat Vladimir Sobotka to the net before one-timing a shot for a 2-0 lead at 15:23.

The Sabres outshot the Sharks, 14-10, in the first period but struggled to break the puck out of their own zone and over-passed on scoring opportunities near San Jose's net. Buffalo's best scoring chance in the first period occurred less than a minute into regulation. Skinner retrieved the puck off a faceoff and his shot from the slot was stopped by Martin Jones.

Momentum shift: The Sabres controlled play during the second period, outshooting the Sharks, 10-5, during the 20-minute span. The momentum shift began with a power play at 6:10. Following a difficult shift, Eichel proceeded to have one of his best periods of the season.

Eichel scored on the power play with a shot from the left-wing circle at 7:21 to cut the deficit to one. It was only the third power-play goal allowed by San Jose this season.

The Sabres had two excellent scoring chances during the next power play, including a one-timer by Victor Olofsson, but failed to score. They managed to not allow a shot on goal during a penalty kill later in the period.

Walk the line: Eichel appeared to be headed offside when he pulled off another remarkable play late in the second period, firing a cross-ice pass from one side of the blue line to the other. Rasmus Ristolainen retrieved the puck and unleashed a shot that was tipped by Sam Reinhart into the back of the net to tie the score, 2-2, with 31 seconds remaining.

The Sabres have a plus-11 goal differential in the second period of games this season, and Reinhart is one of five players on the team with at least four goals.

Reunited: Eichel wasn't done. His first shift in the third period resulted in the go-ahead goal, when he made a centering pass from behind the goal line to Skinner, who scored at 45 seconds. With a secondary assist on the goal, Rasmus Dahlin became the seventh defenseman in franchise history to record at least 10 points in the team's first 10 games of the season.

Tied again: The Sharks tied the score, 3-3, with 8:33 remaining in the third period when Karlsson's shot from the right-wing circle went between Hutton's leg pads.

Next: The Sabres will practice Wednesday in preparation for their game Thursday night against the New York Rangers in Madison Square Garden.