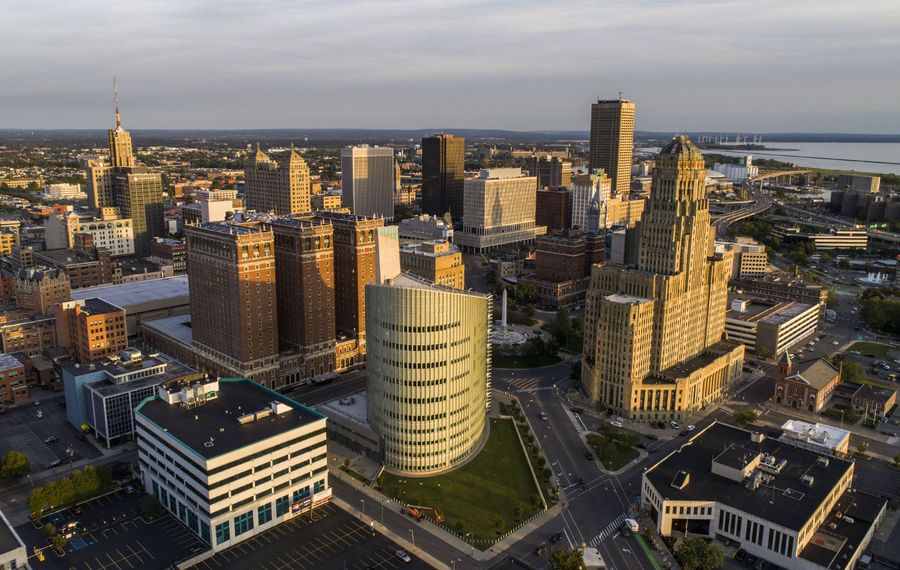 For years, the weak point in Buffalo Niagara's so-called "renaissance" has been its sluggish job growth.

Now, there are signs that the pace of hiring is becoming even more anemic.

The big question is why it's happening. And that's not so easy to answer.

It could be that the economy is finally starting to slow after a decade of slow, but steady, growth. But it also could be that more benign factors are at play, like the difficulty that companies are having finding qualified workers at a time when the pool of available workers has shrunk to its lowest level in nearly 30 years and our population is stagnant.

"If we are slowing down, it's because it's too hard for employers to find people," said Timothy Glass, the regional economist for the State Labor Department.

In fact, Glass isn't even convinced that we're slowing down at all.

Let's start off by looking at the numbers. New data from the State Labor Department on Thursday showed that the pace of job growth here slowed last month to an annualized rate of just 0.5%. Nationally, hiring is almost three times faster.

What was concerning about the latest local numbers is that September's hiring was the slowest monthly increase since February and the third straight month that the pace of hiring had slowed from the month before.

"That trend is not a positive sign," said Julie Anna Golebiewski, a Canisius College economist. "It's half the growth rate we saw in June."

That's worrisome, but those monthly job numbers come with a big caveat: While they are the most timely employment indicator that we have, they also can be quite volatile – and in recent years, they also have been subject to some major revisions as more detailed job data becomes available. But we have to wait until next year for those revisions.

A second set of more detailed job data paints a similarly subdued picture of the local job market. But while those numbers are considered to be highly accurate, they also are much less timely. The latest numbers from that series run only through March, but they also peg job growth during the first three months of this year at a sluggish 0.6% – less than half of the nationwide gain.

Another indicator – the local unemployment rate – also has ticked up slightly, rising to 4.2% in August from 4% in July.

Then there's the recent flurry of concerning employment news this month. Catholic Health Systems is offering buyouts to older workers in a bid to cut costs. DeGraff Hospital is scaling back its operations in a move that affects 50 jobs. Synacor Inc. is cutting 14 jobs after losing a key contract. Edwards Vacuum is eliminating 65 jobs at its Wheatfield factory.

After years of relatively stability, those cutbacks could be a sign of rising instability within the local job market.

Glass isn't so sure. He doesn't think there's enough data in place to discern a downward trend.

"We have steady, good growth," he said.

At least by Buffalo standards, that is.

Our job growth last year averaged 0.6%. Through the first nine months of this year, it's averaged 0.7%. Glass thinks that's a good way to sift out much of the month-to-month volatility.

And Canisius economists George Palumbo and Mark Zaporowski point out that the Buffalo Niagara economy has lagged badly behind the rest of the country in job growth for more than 30 years, creating one local job for every eight that were added nationally.

Over the last 10 years – during the so-called renaissance – our job growth has trailed the U.S. gains to a lesser, but still substantial, margin. During that time, the gap has narrowed to about two local jobs for every five created nationally, and that trend hasn't changed this year, either.

"Neither of them is good," Palumbo said.

There are other indicators that also are reassuring about the health of the local job market. The August uptick in unemployment was too small to be statistically significant. Jobless rates still are at 19-year lows, and they're close to a level that economists consider to be at full employment.

You also don't have to go far to find a "help wanted" sign outside local businesses, which continue to struggle to find qualified workers. That's because the pool of people who don't have jobs but are actively looking for one is at its lowest level in three decades.

The makeup of our population has a lot to do with that. Our population skews older, and that means we have an outsized share of baby boomers heading into retirement, while our stagnant population also means we're not replenishing our labor pool with younger workers at the same rate as is happening nationally.

"With the unemployment rate continuing to go down, it's just getting harder and harder for companies to find people," Glass said.

"There are still people out there looking for jobs," he said. "If you want a job right now, you can get one, unless you have a barrier, like needing transportation."

That's a problem for many companies, especially those in the far-off suburbs, where public transportation is spotty. And that is forcing some companies to get creative. Fisher-Price offers transportation services to its East Aurora campus. Servotronics Inc., which has dozens of openings at its Elma factory, is advertising for workers on billboards.

Those are all signs of a tight job market.

And the pace of hiring is slowing nationally, too. "It might be that we're just following the trend," Golebiewski, of Canisius College, said.

Other indicators continue to flash healthy signs for the local economy. Home sales are robust and prices have been rising faster than the rest of the country each year since 2016. New home construction is robust in the suburbs. Companies such as Moog Inc. and TMP Technologies are expanding locally. M&T Bank is opening a technology hub downtown that eventually could host 1,500 jobs. The flurry of investment by developers to transform old buildings continues in Buffalo.

So the outlook is far from gloomy. There just might be a few more clouds on the horizon.