The next step in giving LaSalle Park the Canalside treatment will be to replace the Hudson Street pedestrian bridge over Interstate 190 and create a water-capturing lagoon, according to Gov. Andrew M. Cuomo, who made the announcement at the Col. Ward Pumping Station on Porter Avenue on Sunday.

Rediscovery and redevelopment of Buffalo's waterfront have been key to Buffalo's turnaround, and the new bridge will give the West Side better access to Lake Erie, helping spread the renaissance to other parts of Buffalo, he said, alluding to the success of Canalside. The Hudson Street bridge connects the neighborhood to LaSalle Park, Buffalo's largest public space along the waterfront, where Lake Erie joins the mouth of the Niagara River.

"That success, that magic should be shared with everyone," said Cuomo, who also attended Sunday's Buffalo Bills game in Orchard Park and met with team co-owner Terry Pegula, though neither side would say if lease negotiations or a new stadium were discussed.

The bridge and lagoon will be "two signature features" of the park, which will be renamed Ralph C. Wilson Jr. Centennial Park once it's completed, the governor said.

Cuomo committed $10 million toward the project, the Ralph C. Wilson Jr. Foundation pledged $5 million and the City of Buffalo will contribute $3 million.

"The bridge will be a symbol of the momentum and the progress and the connectedness that we have going on here in Buffalo," said Mary Wilson, wife of the late Buffalo Bills owner Ralph C. Wilson Jr. and the foundation's life trustee. She added later, "Ralph really believed in connecting communities."

Four concepts have been drawn up, designed with safety and access in mind. The current bridge has "dangerous sightlines," officials said, and is not accessible to those with mobility impairments. The new bridge would be located slightly north and originate at a park on 4th Street. It will split into two directions in the park. One will lead toward the lake, the other toward the park and new soccer fields.

"We've talked for years across the state about the 190 separating communities from the waterfront and just blocking them off, creating a wall," Cuomo said. "So, part of the reimagining of LaSalle is that reconnection."

The lagoon will soften the shoreline and create a natural habitat for wildlife, using vegetation native to Western New York. It also will capture water through green infrastructure and keep the shoreline resilient to climate change, officials said. Renderings call for terraced stones, which would allow pedestrians to walk and sit on the water's edge. A kayak launch is also planned. The design and construction of the lagoon has been led by Buffalo Niagara Waterkeeper, with input from the City of Buffalo, the U.S. Army Corps of Engineers and the New York State Department of Environmental Conservation.

"It's a major project and it will bring many people back," Cuomo said. 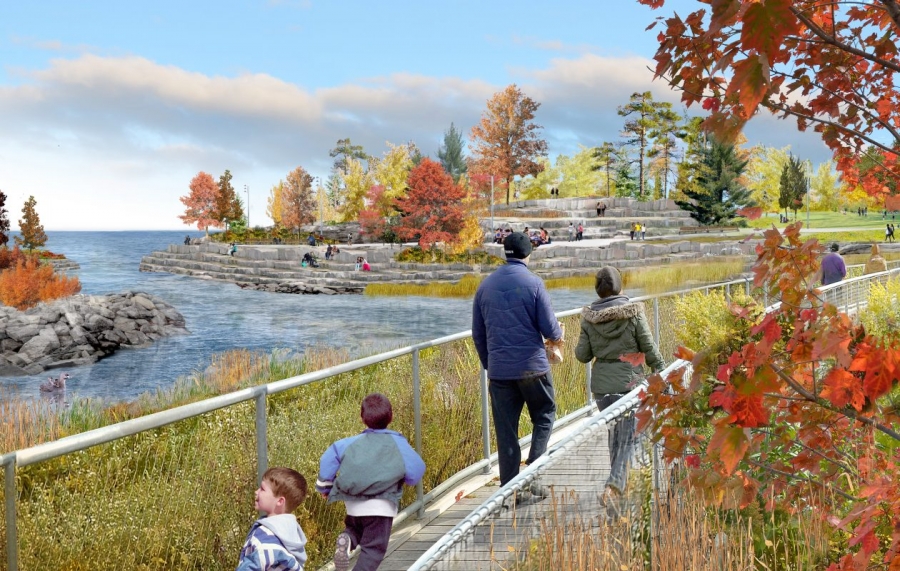 Last year, the Wilson Foundation announced a $50 million commitment to the park, which will have improved waterfront access, better ball fields, bike paths, an athletic loop and an enhanced dog run, in addition to the lagoon. The foundation pledged another $50 million to develop a comprehensive regional trail system. The $100 million investment is the largest philanthropic gift in Western New York history.

Developers will build changes into the park's elevation because it is currently too flat to be interesting or fully functional, they said. A planned 25-foot slope will create an ideal setting for an amphitheater-type concert area, where a temporary stage and electrical service could support outdoor concerts. The hill will also be ideal for watching sunsets and sledding in the winter, officials said.

The park's greenery will get an extreme makeover. Many shade trees will be planted, along with plants that bloom in early April and May, such as apple and cherry blossoms.

A creative playground will be added to the center of the park, near the sports parks, so children can explore while siblings are busy playing team sports nearby. A planned wall on the park's eastern edge will muffle sound from the highway.

Construction on the park is scheduled to begin in 2022. Completion of the park is expected in 2024.

Coming to LaSalle Park: A playland 'beyond anything we've seen'