For decades, people walking along Mirror Lake and the Japanese Gardens near the Buffalo History Museum have seen the century-old building's impressive eight-column portico, its grand stairways made of Vermont marble, its statue of Abraham Lincoln ... and a doorway that isn't really a doorway.

That will be changing as part of an ongoing renovation that will restore the museum's lakeside entryway and make use of the 2,600 square feet of space underneath the portico.

"It feels wonderful," said Melissa Brown, the museum's executive director. "We're really thrilled because space is at a premium ... and we'll be able to have the parkside access. We're going to bring that back so the entire space will be reunited and reconnected."

Doors and windows on the lower level of the portico have been replaced and skylights have been ordered, while there is significant work to be done to prevent the kind of water damage that led to the literal walling off of the portico, leaving the large space unused for about 35 years.

"This is the first time this room has seen natural light," Brown said, pointing at a newly installed window, "in three decades."

The $2 million project, funded by several entities, including city, county and state funds along with private donations, is scheduled to be complete by the fall of 2021.

The rear entrance facing the lake and Delaware Park was actually the original main entrance of the building, which was built in 1901 for the Pan-American Exposition. It was designed by George Cary, with the portico a scaled-down version of the Parthenon.

"It's been a generation that we've not had access on the side," said Brown. "It's interesting because both the history museum and the Albright-Knox had similar histories. Once Elmwood changed, and the 198 went through, there was a catering to the car culture, and the old back of the building became the front. And then the fronts were kind of forgotten."

Brown saw a glimpse of the potential of the lakeside entrance when she recently held a meeting outside on the back portico and saw what happened when bicyclists and walkers didn't see a shut-down doorway.

"We talk about the happenstance visitor – one day we witnessed it," Brown said. "We had a meeting out on the back portico and the door was open. And just the door being open, we saw how many people just wandered in."

Just inside the portico's lakeside entrance, on each sides, are what the museum calls "historic bicycle rooms," where guests of the Pan-Am could check their bicycles while visiting the Exposition. The museum is considering the possibility of using the bicycle rooms for that same purpose, about 120 years later. 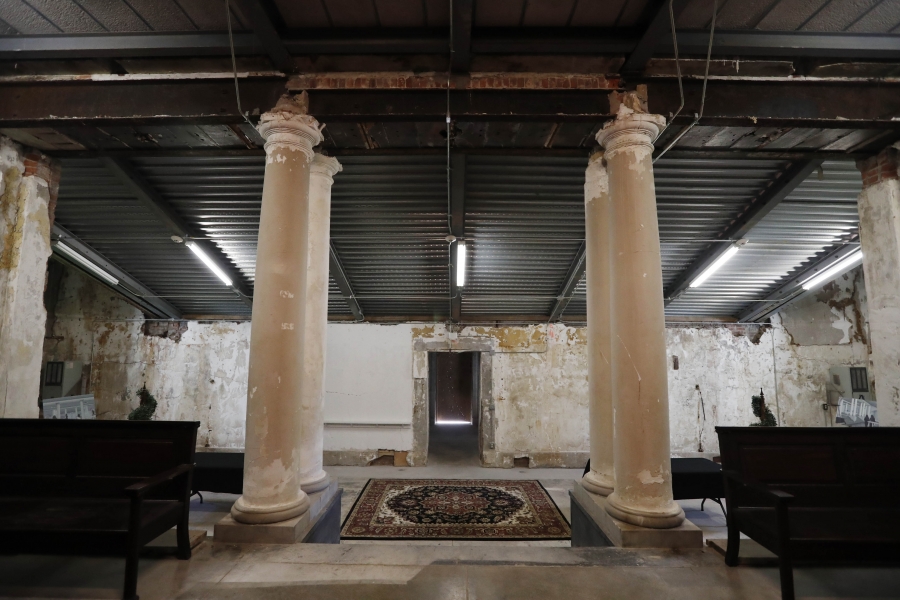 Construction is underway to reopen the Buffalo History Museum's park and lakeside entryway in a $2 million project. The original entryway into the gallery space has been closed for about 35 years due to water damage. (Sharon Cantillon/Buffalo News)

"We know the bicycle path is being used more than it has been, and there's been a lot of investments in the infrastructure," she said. "So it'll be great to be able to integrate into that and actually support it."

Brown said the lakeside entrance would probably not be staffed at all times, but certainly would be put to use during high-traffic times during warm weather, such as the annual Cherry Blossom Festival, which attracts an estimated 5,000 people to the Japanese Gardens over five days.

The added interior space will allow for more exhibit space and increased space for the museum to make use of for events, where it currently hosts weddings and other gatherings.

An interior cement wall will be taken down and a dropped ceiling that currently is above the "Street of Shops" exhibit on the lower level will be removed, creating a larger space that will include more original columns. There are columns in the space that has been unused, while additional columns have been covered by walls in the "Street of Shops" exhibit.

Brown said the museum has offered some tours of the space during renovation and said more are planned so the public can see how the older structure is being unearthed.

"We're really trying to peel back the layers so the building can kind of come through as the architect originally intended," she said, "and allow the building to speak for itself as our largest artifact."