For 194 years, the Erie Canal has allowed boats to make an uninterrupted journey from Buffalo to Albany, and then on to New York City.

A new proposal to stop invasive species could put an end to that route – but not if a host of local and state officials have anything to say about it.

In a confidential report obtained by The Buffalo News, a consultant to Gov. Andrew M. Cuomo's Reimagining the Canal task force this week recommended permanently closing and draining portions of the canal in Rochester and Rome, as well as shutting down the locks on the Oswego Canal in Oswego.

The report said that's the only way to be sure to stop the progress of undesirable species of fish, mollusks and plants from the Great Lakes into New York's inland lakes and streams, as well as down the Hudson River toward New York City.

The state Canal Corp. however said the plan as presented will not happen. It said the consulting firm was not asked to take feasibility or economic impact into account.

"Addressing how the Canal can be used to combat aquatic invasive species that can negatively impact the ecosystem of New York’s waterways is one of the issues being examined by the task force," the agency said in a statement to The News. "The task force retained a consultant to identify ways to protect against these species. The Canal Corp. will not be closing any part of the Erie Canal. The final recommendations from the task force will reflect that.”

In a background briefing, canal officials said it would be up to the task force to balance the invasive species problem against the desire to maintain end-to-end navigation of the canal system.

The study's recommendations stunned officials in the affected cities and members of the state's canal community, who already were suspicious of the Reimagining project.

"It's deeply upsetting. It is worse than we previously heard or expected," said Erin Tobin, vice president of the Preservation League of New York.

"Any action that closes part of the canal is unacceptable," declared Daniel Wiles of Skaneateles, president of the Canal Society of New York State.

"It needs to continue to be a complete navigable commercial waterway, and it takes the closing of one lock to make it not a continuous canal but two canals that almost meet," Wiles added.

The 296-page report by Resource Consultants of Redmond, Wash. does not call for any changes in Erie Canal navigation in Western New York. But it does propose trying to block fish such as Asian carp from making their way down the canal by frightening them with underwater strobe lights, noisemakers and bubbles.

The "bioacoustic fish fence" would be installed where the canal meets Tonawanda Creek, at the Amherst-Pendleton border. However, the report says this system is still experimental. 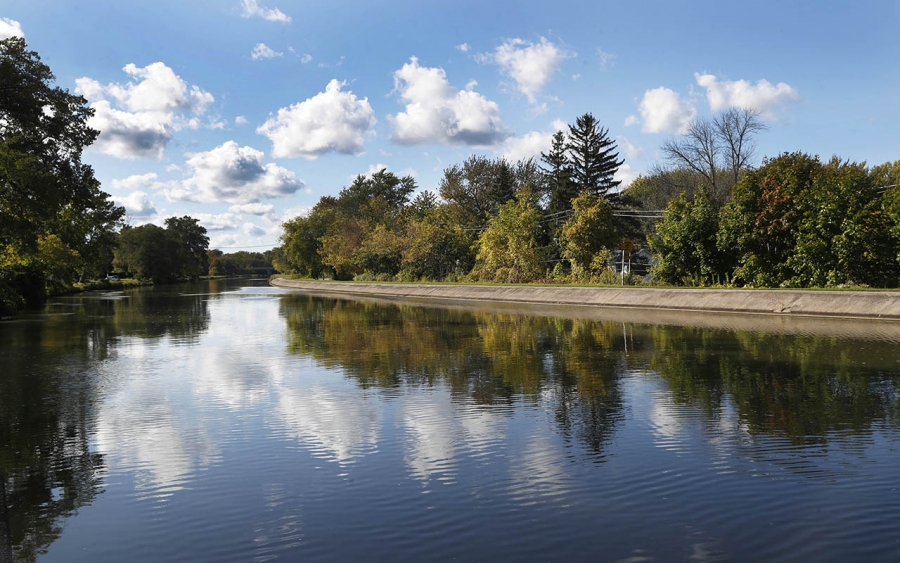 A section of the Erie Canal in Middleport. (Sharon Cantillon/Buffalo News)

The enemies include fish such as Asian carp, alewife, tench and white perch. They reproduce rapidly, live long lives and crowd out native fish species, eating their food.

Asian carp have been spotted in Lake Erie and tench are in the St. Lawrence River, the report said. Alewife and white perch are common in Lakes Erie and Ontario and numerous inland waterways in New York.

Other invasive fish, with names like ruffe, goby and moroko, either are in the canal system or the Great Lakes, the report said. Mollusks such as zebra mussels, New Zealand mud snails and faucet snails also are well established in the lakes.

The report also cites types of invasive seaweed and floating plants that have yet to establish themselves in New York.

The cost of permanently blocking the canal system in Rochester, Rome and Oswego and installing the fish scaring devices in Tonawanda Creek is estimated at between $8.5 million and $18.2 million. 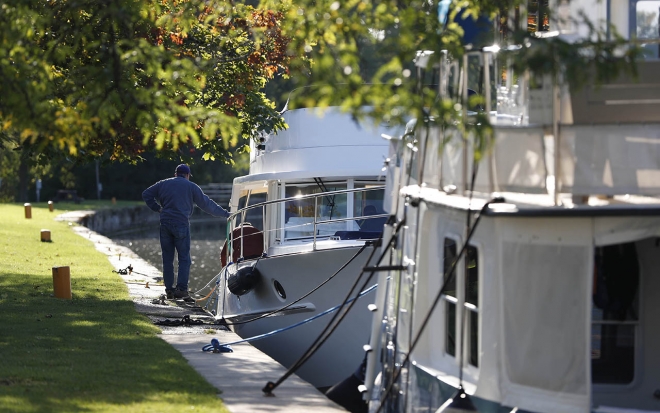 A confidential report on the future of the Erie Canal does not call for any changes in navigation in Western New York. (Sharon Cantillon/Buffalo News)

The consultants suggested Rochester for a 0.35-mile closure between a guard gate and the Genesee River because the river water could continue to fill the canal east of Rochester.

Rome, topographically the highest point on the canal, was chosen for a blockage because that's where the canal meets the Mohawk River, which flows into the Hudson. And Oswego was selected because its branch canal carries powerful flows toward Lake Ontario.

In May, Cuomo assigned the 31-member Reimagining the Canal panel, whose western regional co-chairman is former Lt. Gov. Robert Duffy of Rochester, to consider the canal's future.

Its tasks, according to Cuomo's office, were to identify potential new uses for the Erie Canal aimed at improving New Yorkers' quality of life; find ways for the canal to support and enhance economic development; new opportunities for canal-related recreation and tourism; determine how the canal could be used to mitigate flooding impacts and restore ecosystems; and identify opportunities for expanding irrigation for Western New York farms.

A Canal Corp. official said all the consultants were told to consider only their specific issue, not the overall picture.

The Resource Consultants report says the only way to be certain invasive species don't make further progress is through "hydrologic separation." That means shutting down parts of the canal system.

"I'm not against controlling invasive species," Wiles of the Canal Society said. "But I'm against things happening without additional public discussion."

The task force has not announced plans for any public meetings before sending its report to Cuomo and Gil C. Quiniones, president and CEO of the New York Power Authority. The Canal Corp. is a NYPA subsidiary.

"With a structure as public as the Erie Canal and the associated canals, to have monumental decisions made behind closed doors is unacceptable," Wiles said.

The consultant's report explores three options for blocking invasive species, but all of them call for the shutdown of 8.25 miles of the canal west of Rome.

Rome recently spent $1 million to build a new navigation center along the canal, with restrooms and other amenities for boaters, according to Larry Daniello, the mayor's chief of staff. If the recommendations were implemented, the facility might have everything but boaters.

"The canal is such a vibrant, rich part of our state," Tobin said. "Anybody who spends time in upstate New York, including our governor, knows and loves and understands that the canal is a huge part of the communities all along its corridor."