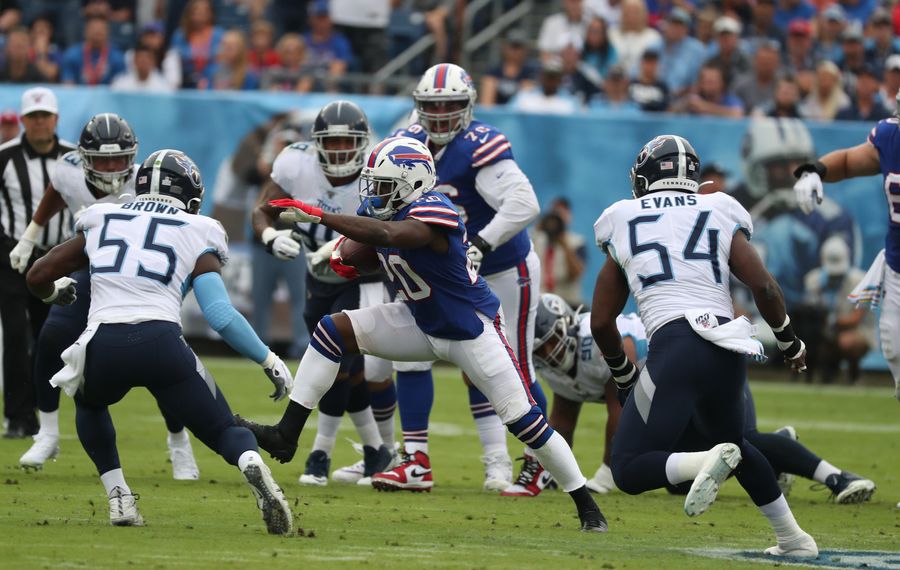 It’s not hard to find the Frank Gore appreciation society in the Buffalo Bills’ locker room.

Go talk to anyone who blocks for him.

Bills tight end Lee Smith was discussing some of the finer points of blocking recently when he stopped in mid-sentence and said:

“Let’s not forget we have a 15,000-yard rusher in the backfield who doesn’t miss many holes. You don’t have to open up a hole for very long. He’s like an arrow through snow.”

The 36-year-old Gore enters Sunday’s game against Miami with 333 yards and a 4.4-yard average. It’s a pace that would give him 1,065 rushing yards for the season. Gore probably won’t hit 1,000 yards this year because the return of Devin Singletary to the lineup this week should lessen the veteran’s workload. However, the Bills have weathered Singletary’s three-game absence just fine because Gore has been so reliable.

Gore gets every yard on the table – and usually a couple more. He never turns a 2-yard run into a minus-2.

Gore has a phrase for the power running he does between the tackles.

“Dirty yards,” he said. “Hey, anybody can run through a big hole. If you can get in and out of small spaces and get yards when people really don’t see it, that’s a plus for us.”

“You see a lot of young guys don’t get the tough yards,” Gore said.

The Bills have been successful running gap-scheme plays this season, with their more athletic linemen pulling to lead the way for backs. The holes generally tend to be a little tighter in gap-scheme runs, as opposed to wide zone runs on which the defense is more spread out.

“The one thing about him is he can find small creases,” said Bills running backs coach Kelly Skipper. “He can find the hidden yards.”

“He has such an incredible feel for the game,” said fullback Patrick Dimarco. “He’s seen every front. He’s seen every coverage. He’s seen every stunt. He’s seen every blitz. The guy has seen it all. At this point, with as much football as he’s played, everything is second nature to him. It’s all reactive. In the position back there, you have your lines, you have your starts, you press the line of scrimmage and you try to manipulate where you want your linebackers and your safeties to fit by your tracks and by pressing your blocks. Nobody does it better.”

That can cause the linebackers to run into double-team blocks by the offensive linemen and get caught up in combination blocks.

“We tell our running backs you don’t want to make a cut until you get on the lineman’s heels,” Skipper said.

If the running back hesitates too much or cuts too early, the linebackers can fall back and avoid blocks.

Gore is the master of proper timing. He’s also a master at making himself “small through the hole.” It’s one of the traits that made Bills Hall-of-Famer Thurman Thomas great.

(Here is Gore pressing the line of scrimmage behind good blocking against the Bengals.)

“Get skinny in small creases,” Skipper said. “Frank can slash through that hole pretty good once he puts his foot in the ground.”

(Here is Gore making himself small on a 4-yard run against the Titans.)

“Frank has such a good center of gravity and has such power in his lower body, he’s able – once he gets his shoulders going downhill – that’s where he lives,” Dimarco said. “He’s able to take shots on his legs. He has incredible balance, and that’s why he’s been doing it for so long.”

Two other traits that allow Gore to gain every yard available to him are trust and unselfishness.

Gore runs with the faith that if he’s on his lineman’s heels, they will give him a crease to hit.

“What I like about this offense is we all play for each other,” Gore said. “That’s big. Nobody cares about who makes the play as long as the play gets made. . . . We do our job and I have trust in our guys.”

Running backs looking for a home-run play tend to miss some of those holes that look like 2-yard gains but turn into 4-yard gains. Not Gore.

“He’s playing for the love of the game,” Skipper said. “It’s not so much for the stats. He’s going to do it right, the way it’s supposed to be done.”