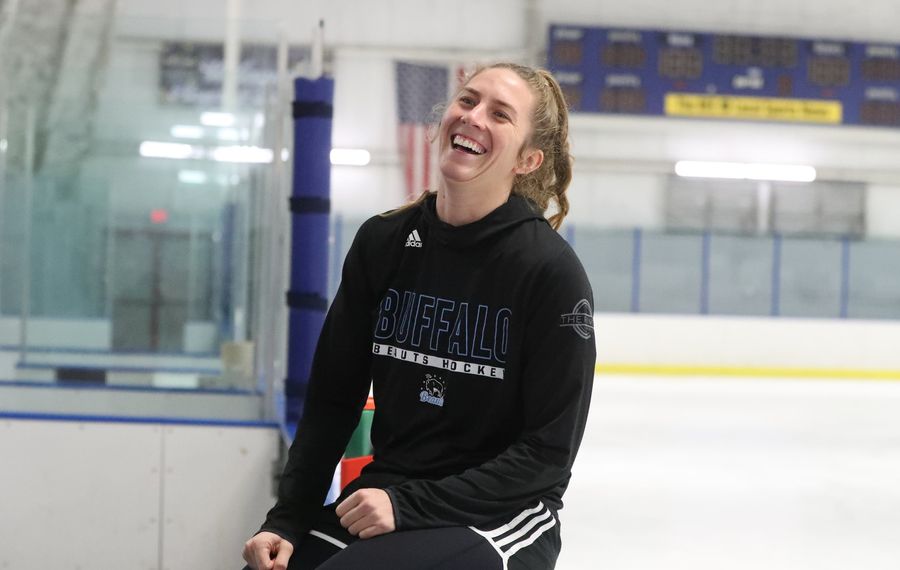 Corinne Buie is in her fourth season with the Buffalo Beauts of the National Women’s Hockey League, but this year is decidedly different after a whirlwind of change swept through the landscape for pro women’s hockey in North America.

Nearly 150 players announced in March that they would sit out the season, meaning the NWHL after the Canadian Women’s Hockey League folded. The players announced the #ForTheGame movement and formed the Professional Women’s Hockey Players’ Association with the goal of a financially viable model to grow the game, including wage increases and health insurance.

Recognizable names such as Shannon Szbados (Buffalo’s goalie and reigning league MVP), Brianna Decker and Kendall Coyne Schofield are holding out this season.

That forced players to make a decision: Keep playing or join many of their teammates on the sideline.

“I respect everything they’re doing,” said Buie, the Beauts’ captain. “I just continue to play because everyone has to make their own individual decision and I have really enjoyed being a part of the NWHL. It’s given me the opportunity to play professionally and to be paid to do so.

“I’m living in Buffalo to play hockey so I want to continue to do that.”

Asked specifically about the #ForTheGame movement and whether she envisions a solution involving those players, she declined comment. She said she has two goals: Play the game and be a role model.

“What we’re all looking for is a league to be part of professionally,” she said. “If we can get paid to do so, we could be role models for young girls and they can look up to us and see that they can have a league like the NHL, something they can aspire to do, too.

“Who knows what the future holds? We are going to keep doing everything we can to pave the way for them.”

A Minnesota native, Buie, 27, has played in every Isobel Cup final in league history and is a two-time Cup winner, including scoring the game-winning goal for the Beauts in 2017.

These Beauts, though, are radically different than the team that Bouie has played on for the last four years after she played for the Boston Pride in the league’s inaugural season.

The Beauts no longer play and train at Harborcenter, having moved to the Northtown Center in Amherst. The team is no longer owned by Pegula Sports and Entertainment, which returned operations to the league last spring after owning the team for a season and a half. The team has a new general manager and a new coach. The roster, like rosters around the league, no longer has players from the United States and Canadian national teams.

“I feel really close to this group already,” said Buie, a forward. “We had a chance to go to Riverworks and do some team bonding together. We’ve already had two road trips to Connecticut and Boston so we really spent a lot of time together already, I really feel like the ‘getting to know each other’ part is out of the way now. Now there’s what we can do together and I’m excited.”

The Beauts (1-2) make their regular season debut at Northtown Center against the Connecticut Whale with games Saturday at 11:30 a.m. and Sunday at 1:30 p.m.

Buie spoke to the News this week.

BN: What do you think Beauts fans should expect this season as the home opener approaches Saturday?

CB: We already got the chance to play against Connecticut and we had success against them, but we had two tough games for us last weekend (in losses to Boston). We definitely grew as a team through those. … We are really excited to play at Northtown Center for our first home games there and excited to see a big crowd and to be back in Buffalo playing. …

We love to see a good crowd, especially young girls, young hockey players, families there. I hope we get a good crowd and I’m excited to do our best to win this weekend and meet people after the game … Two games will be fun, I think we can win both. 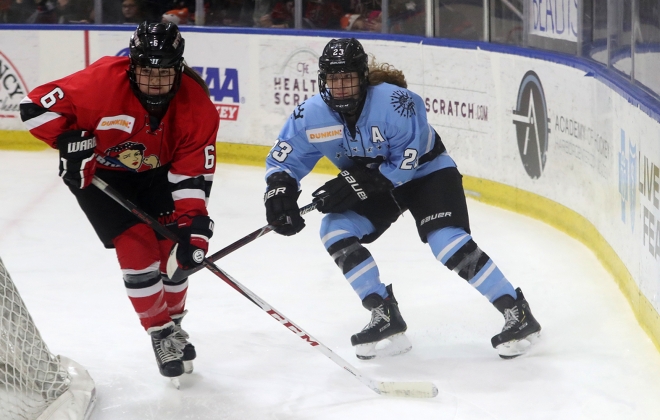 BN: For someone new to the NWHL, why should fans follow this team?

BN: You’re one of eight players who has played in all five years of the league. What does that mean to you as a player?

CB: It’s pretty cool to be one of the few girls that have been here the whole time. I’ve seen it all. I love playing hockey. I’m just excited to continue to be a part of this league that’s given all of us such a great opportunity to play the game that we love and to be role models for all the young girls who can see us playing professionally and know that they can do it, too.

BN: You also work at Daily Planet, is it difficult to balance the hockey life and the other side of your life?

CB: It’s a little bit difficult. I chose a job where I could have flexibility in my schedule, but there’s a lot of girls who travel a long way to come to practices late at night. Managing everyone’s schedule, we travel on the weekend so we leave early on Friday and people have to take days off. But we are all committed, and we love what we do so it’s worth it.

BN: What is it about Buffalo that made you want to re-sign with the Beauts last June?

CB: It was definitely a big decision and it wasn’t one I took lightly with all that was going on. I wanted to continue to play in Buffalo, I really love it here. It’s become like a second home to me. I’ve gotten really comfortable here in the neighborhood I live in here in North Buffalo, working at the coffee shop and making a lot of good friends here. The people of Buffalo are just great people. They have embraced the Beauts and it’s a hockey city. People love sports and I love being a part of that.

BN: Have you noticed anything different about the team now that the Pegulas don’t own the Beauts anymore? Has that changed anything at a player level or is it business as usual?

CB: We’re moving forward. People are asking a lot of questions about that; people want to bring that up. But, you know, we have a lot of resources and Northtown Center has really taken care of us there. The Pegulas, they did a lot for us and we are thankful for what they did, but now it’s a new year. It’s definitely different, but we are grateful for everything we have now and continuing to play.

BN: What are you hoping for from the rest of your hockey career in the NWHL?

CB: I’m just taking it year-by-year, but I definitely want to bring another Isobel Cup title to Buffalo. I’m loving playing and staying in the moment and I’m excited for the rest of the season.

BN: Given the roster changes, who are the players that have stood out to you so far?

CB: Definitely another top defense. Mary-Jo Pelletier, she’s a really strong ‘D’ coming right out of college out of New Hampshire. She’s a great girl, an assistant captain, a great leader. Everyone’s a leader on the team, a lot of personality, girls doing stuff in the community. Brooke Stacey. In the first three games, she’s scored in every game right out of college from Maine. She’s a big, strong forward, fun to watch. She’s been really clutch so far.