A lesser-known notch in the screaming slice belt bolstering South Buffalo’s ballooning pizza gut, Artone’s has been a neighborhood staple. Originally opening as a submarine shop known for its steak hoagie nearly 50 years ago, it later added pizza and began cranking out the regional style for years, albeit under different ownership and through brief periods of closure.

This most recent iteration revived the business in late 2018 and we’re pulling up the slice bus (more of a shoddy Chevy Impala) to run these bad boys through the combine, AKA the SexySlices digestive system. Scoring almost exclusively takes place during the initial oral drills in case you were wondering.

Dough: (B-) Textbook Buffalo poof, its got a well-browned patchwork undercarriage and isn’t exceedingly thick. There’s a steamy fresh-baked bread tenderness about it, but the fluff factor is hindered by a gummy top layer that turns the chew into a bit of a goo ball. This baby needed a lot more oven love to send it over the goal line.

Cheese: (B) The canary in a coal mine for an underbaked pie, this stark white surface has me shook. Extension to the outer edge of the pizza is an evergreen look I like, and the coverage is uniform throughout. It’s a quality product and was hit hard enough with heat to pull properly, but not enough to create the caramelization that boosts "B" students to the Honors program. I was worried we would still be at the grainy stage of cheese melting by the look of it. Crisis averted.

Sauce: (C+) Sweet, thick and tinny. Two of those aspects fall under a preference rating, but the last is universally off-putting. (I look forward to your comments, can-lickers.) It’s very classic Buffalo in texture and taste, but prefer a zestier more acidic bite with a looser consistency. This reminds me of Imperial’s sauce, save the odd metallic twang.

Pepperoni: (B) What was once a master’s class has regressed to the mean. A far cry from the fennel-packed "A+" crispy meat mat that covered the surface of the slices I got in 2015, this pepperoni placement is exactingly average in quantity and char. Nothing bad, just lacking the wow factor that was once there. 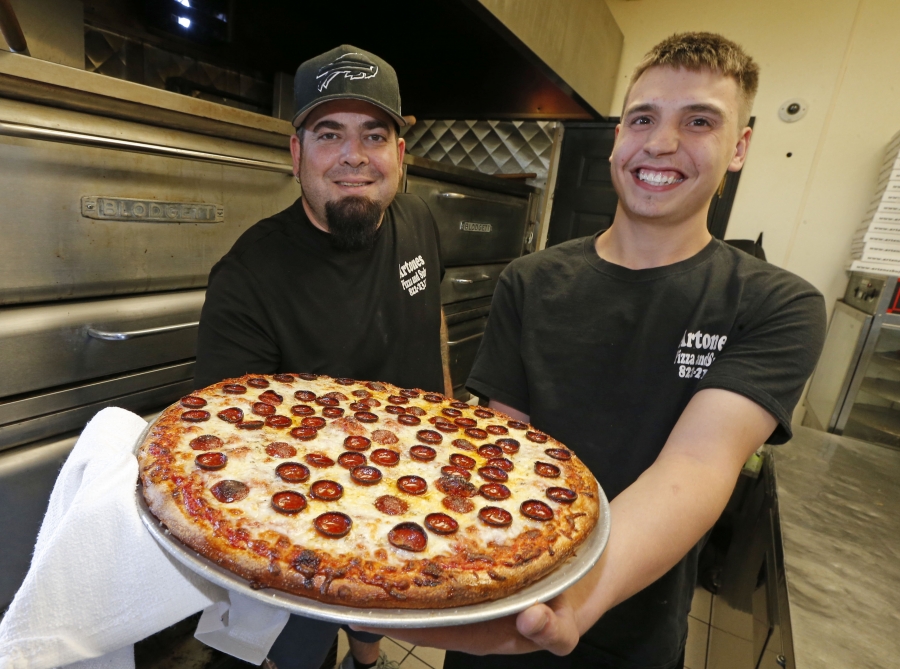 Owner Joe Kurnik, left, and employee Melvin Steele, pull a fresh cheese and pepperoni pie out of the oven at Artone's Pizza & Subs. These photos were taken at a separate time from the @SexySlices review. (Robert Kirkham/Buffalo News)

Overall: (B-) Down from an "A-," Artone’s unfortunately came out worse for wear this time around.

Ghostly white cheese, slightly gummy dough and rubbery rims carry the telltale marks of an under-bake. The most common error I’ve encountered on the pizza trail, I’ve seen too many pies pulled before their prime. Their potential forever damned to the purgatory of what might have been. At least there’s plenty of company.

I hold a review policy of never asking for special slice treatment (e.g., well-done or double pepperoni) because as a pizzeria your standard should be what you believe to be your best. I always show up a few minutes after the quoted pick-up to give every pie its best shot. Sadly, this go-around at Artone’s took blows across three of four categories mostly due to bake time. Worth a try if you’re in the neighborhood, a fan of the regional style, and looking for some newness (particularly considering the value), but this pepperoni has to keep rollin’.

This is Buffalo, where pepperoni pizza matters

Deal: Large cheese and one topping on Mondays for $11.95.