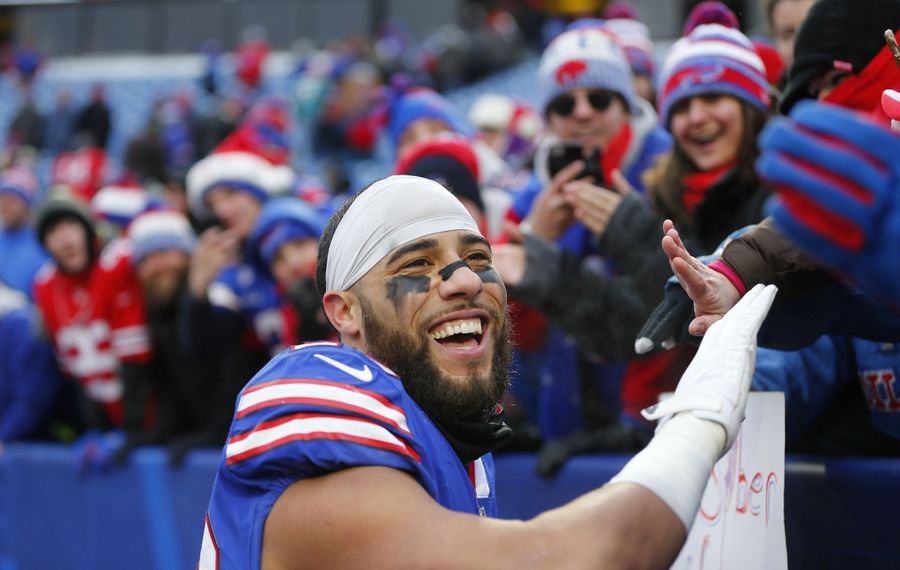 When the Bills run: Jon Feliciano has been one of the team’s unsung heroes. The Buffalo Bills have run often behind their right guard, with 21 plays that are averaging 5.67 yards. That ranks fourth in the NFL. The Bills are also good at going straight up the gut. They have 41 runs up the middle, which are averaging 5.22 yards. That ranks fifth. That’s not much of a surprise since Frank Gore excels at running between the tackles. The Bills should get their outside threat back this week, as well, with rookie Devin Singletary practicing fully at the start of the week. He’s missed the last three games, plus the bye week, with a hamstring injury. The Bills, who have survived just fine without Singletary, rank sixth in rushing yards per game, at 139.6. Take quarterback Josh Allen’s 158 yards out of the equation, and the team would still rank in the top half of the NFL. They should feast against a miserable Miami run defense. The Dolphins are giving up 169.6 rushing yards per game, 31st in the NFL. EDGE: Bills.

When the Bills throw: It’s not just the run the Dolphins are terrible at defending. Miami is giving up 9.51 yards per pass attempt, last in the league. Cornerback Xavien Howard is a baller – his 11 interceptions in the last 21 games is tied for most in the NFL. The Bills’ passing attack is still finding itself. Buffalo ranks 19th in passing yards per game (232.8) and 20th in yards per attempt (6.5). Allen is coming off what he called the best game of his career in Week 5 against the Titans – save for another maddening interception. The Bills can win a lot of games on the strength of their defense alone. Allen has to recognize that and minimize the self-inflicted damage. A big question heading into Week 7 centers on what Duke Williams can do for an encore. His debut against Tennessee included the game-winning touchdown catch, a highlight of the season so far. Williams’ emergence made Zay Jones expendable. Now, he has to build on that promising start. EDGE: Bills.

When the Dolphins run: Stop me if you’ve heard this before, but the Dolphins also stink at this. Miami is averaging 58.2 rushing yards per game, 31st in the NFL. It’s almost like the team should never have let Gore, who was Miami’s best running back a year ago, leave for Buffalo as a free agent. Kenyan Drake has gotten most of the work in Gore’s absence, but doesn’t have much to show for it. Drake is averaging 3.7 yards per carry this season. Miami has just one rushing touchdown this year. The Bills’ run defense is giving up 87.8 yards per game, which ranks seventh. The run defense might be without linebacker Matt Milano, who is dealing with a hamstring injury. This is the game to be shorthanded, though. EDGE: Bills.

When the Dolphins pass: Ryan Fitzpatrick? Josh Rosen? A 58-year-old Dan Marino? Let’s be real – it doesn’t really matter who the Dolphins have throwing the ball. Miami has 42 points in five games. That puts it on pace for 134 points, which would be an NFL low for any team in a 16-game season. Not all of the blame should fall on Fitzpatrick and/or Rosen, but there is a reason Miami is widely expected to draft a quarterback in the first round in April. To be fair to Miami’s quarterbacks, they don’t have much to throw to. Drake is also the Dolphins’ leading receiver, which doesn’t say much about the wideouts. The Bills rank third in the league against the pass and must be thrilled to go against a Miami passing attack that has thrown a whopping nine interceptions in five games. EDGE: Bills.

Special teams: The addition of Andre Roberts hasn’t done much to spark the Bills’ punt return game. Buffalo ranks 26th in punt-return average at 5.0 yards. On the other side, the Bills are giving up 12.1 yards per punt return, which is second most in the NFL. The kicking units have been better. The Bills average 28.0 yards per kick return, which ranks sixth, and their coverage unit is allowing 18.6 yards per return, which is fourth. The Dolphins’ Jason Sanders will try to avoid the curse that has seemingly been put on kickers going against the Bills. Twice this season, an opponent has cut their kicker after playing the Bills – the Jets in Week 1 with Kaare Vedvik and the Titans in Week 5 with Cairo Santos. Sanders is just 1 of 4 on field goals of 40-plus yards. The Dolphins aren’t without one bright spot, though. The team leads the NFL in kickoff return average allowed, at just 14.0 yards. EDGE: Bills.

Coaching: You have to feel for Brian Flores. The Dolphins’ new head coach will ultimately be judged on wins and losses, even when his organization is doing everything it can to actively lose games. Not to bring up bad memories of the Sabres, but let’s say it again: Players and coaches never tank – front offices do. It’s impossible to grade Flores as a head coach at this point, although the track record of Bill Belichick disciples does not portend him being an overwhelming success. Sean McDermott and Co. have a new challenge this week – dealing with heightened expectations. The Bills entered the week as 16.5-point favorites – their largest margin since the 1992 season. Miami might be historically bad, but it’s still a team in the NFL. The Bills can’t afford any type of hangover coming out of the bye week. McDermott knows that. EDGE: Bills.