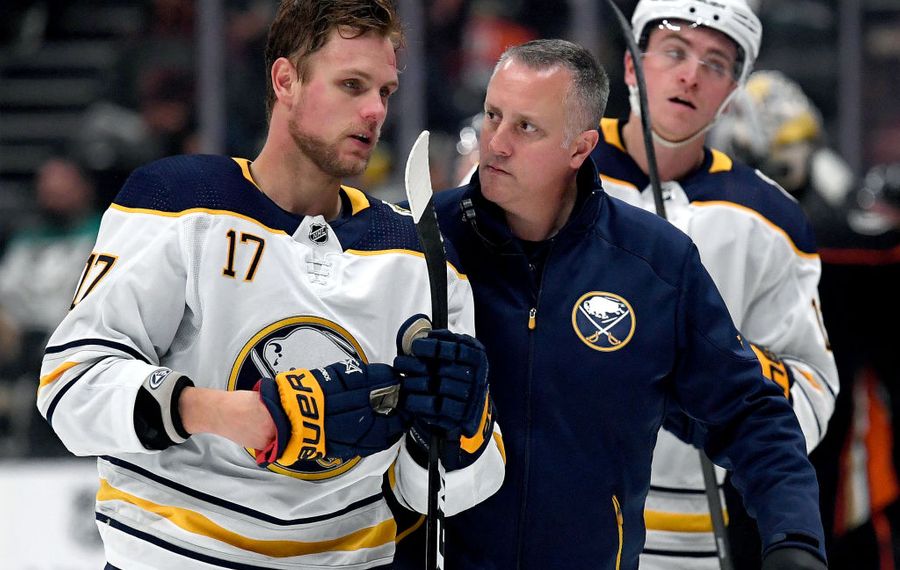 The hit occurred during a stoppage in play at 15:57 into the second period of the Sabres' 5-2 loss in Honda Center. Ritchie blindsided Sobotka, grabbed him by the face and drove him to the ice. Sabres goalie Linus Ullmark came to Sobotka's defense by punching Ritchie with his blocker.

Ritchie was assessed a double-minor for roughing, while Ullmark was penalized for his involvement in the skirmish. The hit appeared to be retaliation for Sobotka checking Ritchie into the boards moments earlier. Sobotka left for the trainers' room but returned to play 14:30 for the Sabres.

Sabres coach Ralph Krueger was pleased to see the Ducks reprimanded by the league for at least one of the hits that he deemed to be unnecessary. Ducks winger Carter Rowney hit Victor Olofsson from behind earlier in the second period, leading to a skirmish in Anaheim's defensive zone.

Rowney received a two-minute minor boarding penalty for the hit on Olofsson. Despite the physicality, neither team received a major penalty. The two teams combined for 42 penalty minutes, 24 of which were assessed to the Ducks.

"Both of the situations, Sobotka and Olofsson, that’s not courage from the other team at all when you’re doing that after the whistle is blown," Krueger said of Ritchie's fine. "I think there’s a lot of respect in the game today and that shows a lack of respect and I’m really happy at least one of the two scenes was dealt with in that way for sure.”

The money collected from Ritchie's fine will go to the Players' Emergency Assistance Fund.

Los Angeles Kings’ Todd McLellan isn’t the only coach to fear the Sabres’ power play. Prior to Anaheim’s win over Buffalo in Honda Center on Wednesday, Ducks coach Dallas Eakins kept his assessment of the Sabres brief: “I don’t want to see their power play, that’s for sure.”

McLellan, however, is the first opposing coach to heap praise upon Sabres rookie winger Victor Olofsson, who entered Thursday tied for the NHL lead with six power-play goals. McLellan explained that Olofsson, who also led all first-year players in goals, has an innate ability to find the net in man-advantage situations.

“From what I’ve watched, he gets into that spot," McLellan said of Olofsson. "He has a sense of space and he has an idea of where he wants to put the puck, it looks like, before it arrives. A lot of guys, they’re picking their spot as the puck gets there. He seems to know where he wants to put it and it doesn’t take much for him to score. It’s refreshing for them, I’m sure, and good for our league to see a young player like that score. We just hope he doesn’t do it tonight."

Winger Conor Sheary, who skated Wednesday in Anaheim as part of his recovery from an upper-body injury, returned to the lineup for the Sabres against Los Angeles after missing the past four games.

The 27-year-old winger scored two goals in the season-opening win at Pittsburgh.

With Sheary back, forwards Evan Rodrigues and Curtis Lazar, and defenseman John Gilmour were healthy scratches. Sheary scored 14 goals during his first season in Buffalo. Rodrigues had zero points with four shots on goal while averaging nine minutes of ice time over the previous four games.

“Conor’s like a spark plug,” Krueger said prior to puck drop Thursday in Staples Center. “Kind of darting in and out of situations. Hard-working guy, good skater, good skill set. I think him coming into the lineup will add some punch. … We’re looking forward to seeing what he can bring.”

The Sabres are off Friday in San Jose ahead of their matchup against the Sharks Saturday in SAP Center. Meanwhile, the Rochester Americans host the Cleveland Monsters on Friday at Blue Cross Arena.