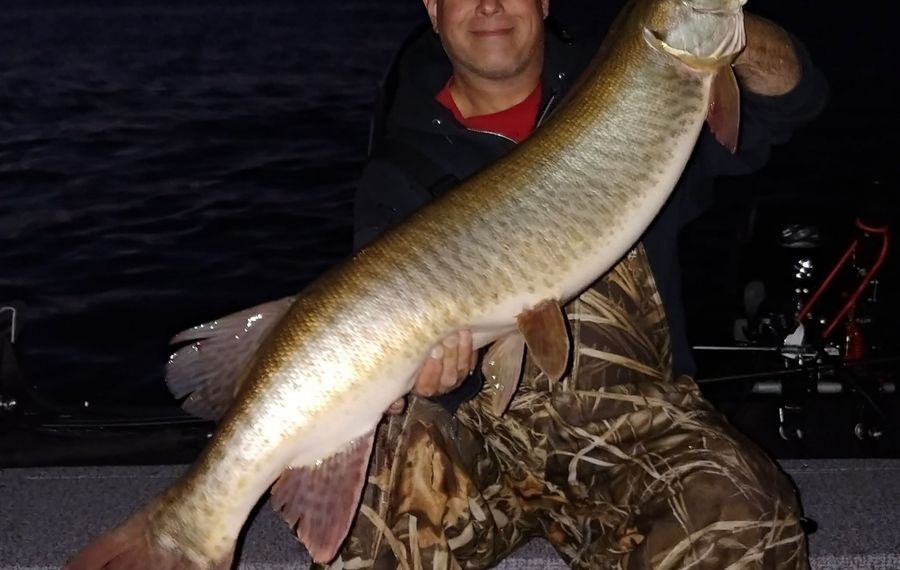 A wise fisherman once said, “Fish are where you find them.” With another front coming through this week, bringing with it rain and high winds, it could be that much-needed push for staging steelhead off Lake Erie streams, as well as off Lake Ontario streams for salmon and trout. You might have to seek to find.

While caution is advised, the Sturgeon Point boat launch is open according to Capt. Joe Fonzi of Gasport. After being told by several people that it was closed, he went to the launch ramp and asked the marina operators. There is a narrow channel heading out that is marked with buoys, 4½ to 5 foot deep. Earlier in the week, Fonzi launched at Safe Harbor Marina in Buffalo and made the run to Sturgeon Point. He had a banner day on perch near the 50-foot mark, caught some huge bass prefishing for the Canadian Tire Lake Erie Open Bass Tourney in 35 to 45 feet of water and finished things with walleye in 45-foot depths with gold blade baits. Things were so good that he brought his charter there the next day. The bulk of the fish were gone, and he had to go searching again. While there are no guarantees, Fonzi and his partner Larry Mazur were feeling good about the tournament. Mazur caught a 7-pound bass and Fonzi had four in the 6-pound class. It wasn’t meant to be when the lake was made off-limits for the tournament due to high winds. With more high winds in the forecast, anglers will have to look for pods of perch, bass and walleye again, but they are out there.

In the tributaries, there are some trout available, but you must work for them. Weather forecasters are calling for an inch of rain this week. According to Danny Colville with Colville Outfitters in Hamburg, the smaller scouts are starting to push out. We are starting to get cold river temperatures at night, which causes small pods of fish to push near the mouths. “With the low water, there are lots of fish at the mouth of most creeks,” says Colville. “We should see spurts of fish now pushing in nightly. The next big run will be when the lake temp is lower than the river temps. It's my experience that we will see a decent push when the creek is colder than the lake and the second major push when the creek is warmer than the lake.” Until then, expect the average Erie fish of 3 to 6 pounds in small- to medium-sized pods. With all the low water and high pressure, fishing is spotty at best. Use BnR Soft Plastic Beads and Death Roe soft plastics in the clear water for egg initiations. The steelhead are taking white jigs in size 1/64th ounce, according to Colville.

The weather forecast held true for the Canadian Tire Lake Erie Open last Saturday. High winds kept everyone between the Peace Bridge and Chippewa, Ontario. While bass fishing was great on Friday, everything changed on Saturday and the winds and river current clashed. Swimbaits did most of the catching for the day. A 5.99-pound smallmouth was big fish. Read the results in Scattershots. Chad Beyer and Matt Wagner of Tonawanda caught 50-inch class muskies on back-to-back nights last week, along with a 28-inch chunk of a walleye as they trolled the river. In the lower river, Mike Rzucidlo of Niagara Falls reports he finally caught another salmon off the NYPA fishing platform on Monday, tossing a No. 3 spinner with an orange body and a silver blade. For the most part, the action has been slow. Ditto for boat fishermen targeting salmon in the Devil’s Hole area. Check out the 10-pound walleye caught by Matthew Birmingham of East Aurora while drifting a MagLip plug near the river mouth with Capt. Frank Campbell of Lewiston in this week’s online gallery. Lisa Drabczyk of Creek Road Bait and Tackle reports that bass fishing is still good in the lower Niagara downriver. Shore fishermen in the upper stretches of Artpark casting for steelhead and salmon are starting to hook up with lake trout on occasion. Remember that the lake trout season is closed. If you catch one, release it quickly and unharmed.

Not too many people have made it out on the big lake this week, focusing more on the tributaries. One of the busiest spots will be the St. Mary’s Archers Club Catch and Release Tournament Oct. 16-18 on the Oak Orchard River. Ron Bierstine with Oak Orchard Tackle and Lodge reports that any significant rain should bump upriver flows and pull in more fish. It also should add some color to the water, which would be a good thing. It’s been a slow migration to date. There are a fair number of kings at the dam in Waterport. The same can be said for Burt Dam and 18 Mile Creek, according to Karen Evarts at the Boat Doctors in Olcott. There are mixed reports from anglers. Pier action has been slow. Some anglers with small boats are working the creek in some of the deeper holes. The dam has a good mix of fish but getting them to hit with all the pressure has been tough. With rain, seek streams away from the high-pressure areas for a mix of trout and salmon.

Musky fishing has picked up as water temperatures are dropping. Water temperature on Monday was at 58 degrees. Two nice fish for Capt. Mike Sperry of Chautauqua Reel Outdoors by casting last weekend and other anglers were catching them, too. Jointed crankbaits and jerkbaits are working, with yellow perch and black being the best colors, according to Sperry. The walleye jig bite in the north basin is in full swing. Use No. 9 jigging Rapalas, flat jigs, and 1 to 2-ounce Gotchas. Jig them vertically from 30 feet of water and deeper. Perch action is picking up around the lake, especially in the north on minnows.